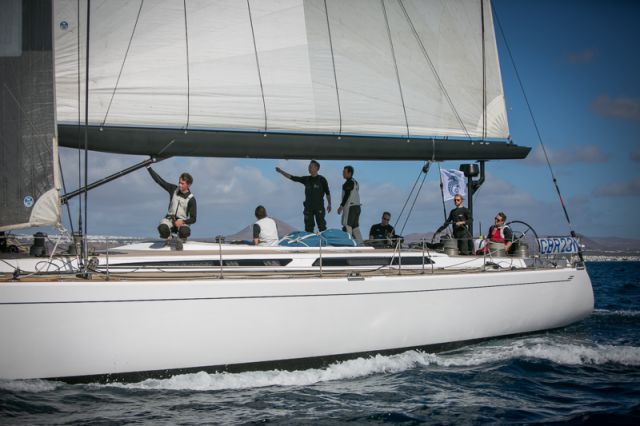 “Day 10 out here and life is good. It's important to look around sometimes and really enjoy the great times we are having. We are in slightly lighter pressure then usual, but still moving well and we seem to be holding with the competition. It's sunny and warm and watches were flying by until we started sailing through massive amounts of seaweed. The stuff haunts us, huge patches with no way through and no way to see them at night. Everyone on board has a different idea of how often we should back down (stop the boat and go in reverse to clear the keel and rudder) and some creative ideas are developing about how to clear the rudders underway. We think we lose a little over half a mile for every back down, but sometimes the weed can reduce boats speed by 1.5-2 knots, so it's a funny opinionated game to see how often stopping is necessary. Often we will prep for a back down, only to have the weed come off seconds before then maneuver...classic. I'm writing this post after having some frustrating time at the helm, so my hatred of the weed is at an all-time high. Perhaps it's not as bad is I'm making it sound! Under 700 miles to the finish and we are pushing hard to keep our position. There are some potentially tricky spots up ahead, so stay tuned to see how it works out!”

“I have raced Sérénade across the Atlantic once before in the 2011-12 two-handed race, La Transquadra. I wanted to make another Atlantic crossing in a race again. Though I loved the Transquadra experience, I wanted something different and made an entry as soon as I found out that the RORC was organising a new race. I would like to make a faster crossing than the previous one (16 days, 4 hrs) which won't be easy as the distance is a bit longer and winds might be weaker.”

You can view the seaweed and read all the blogs here!