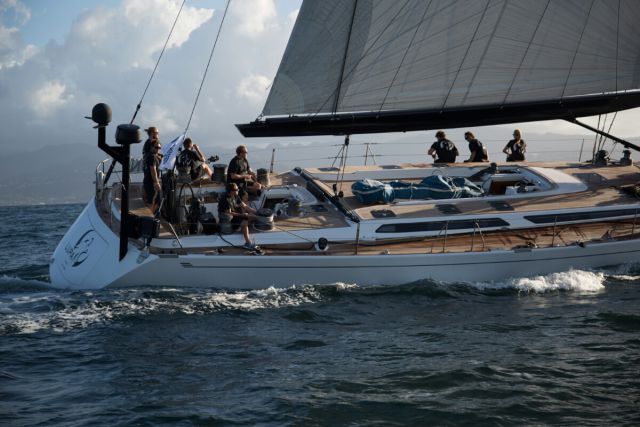 Prior to the start, Puerto Calero Marina provided an exceptional base for the yachts to prepare for the race. The Calero family are yacht racers themselves and this was evident in the manner in which the entire staff went out of their way to assist the competitors. For the RORC Transatlantic Race, safety is of primary concern and every yacht, prior to the start, is inspected for ISAF Special Regulations Category 1, plus additional requirements covering communication equipment, personal survival training and First Aid, which is part of the RORC commitment to safety at sea during all of the club's racing activities. In addition to the safety requirements every yacht carries a YB Tracker so that their progress can be followed by friends and family from ashore. The tracker provides real time leaderboards, weather information as well as their track across the ocean.

As well as providing superb facilities, Puerto Calero Marina was the venue for a week of social activities, notably the Westerhall Rum's Pink Hat Party on the Tuesday and RORC Transatlantic Race Gala Party on the Thursday before the race. After a 24 hour delay due to a frontal system which swept through the Canary Islands bringing more than 45 knots of wind, the start of the RORC Transatlantic Race was blessed with sunshine and a gentle northerly breeze. The only abnormal weather feature was a perfect double rainbow, pointing the way to the turning mark off Marina Lanzarote, Arrecife - the only mark of the course before the fleet would make landfall in Grenada.

In the battle for Line Honours and the IMA Line Honours Trophy, there was an early exit for the hot favourite the Finot-Conq 100, Nomad IV, sailed by Jean-Paul Riviere. On Day Three gear failure forced the French Maxi to head back to the Canary Islands for repairs. Russian chartered Southern Wind 94, Windfall, skippered by Fabrizio Oddone and Jeremy Pilkington's British Baltic 78, Lupa of London, took up the running and an epic battle ensued for Line Honours. The two powerful Maxis duelled for 3000 miles with the lead swapping hands on numerous occasions. However, Lupa of London eventually got the better of Windfall in the lighter downwind conditions as the two yachts approached Grenada.

With the majority of the fleet still racing, the overall winner after IRC time correction was undecided. However, as the rest of the fleet started finishing it was clear that Lupa of London's corrected time was not to be beaten and the British Maxi scored the double win of Line Honours and Overall under IRC, lifting the RORC Transatlantic Race Trophy and the IMA Line Honours Trophy. Skipper Daniel Stump was full of praise for the team. "We were only eight crew, but they are some top sailors with great commitment and willpower. We worked really hard and seamlessly together to get the boat going as fast as we could and I am really proud of all the crew. On the delivery to Puerto Calero, Lanzarote, I sat down with navigator Jonny Malbon and in our dreams we wanted to take Line Honours and the overall win, but that was a big call, so this really is a dream come true."

Two highly different teams battled for the class win, with the intensity of the duel propelling the two yachts to second and third overall. The highly experienced crew on board Aref Lahham's Swan 68, Yacana, are all friends from Greece, racing a heavy displacement yacht that they have known for years. In sharp contrast Class40 Oakcliff Racing was crewed by four young American sailors that had never crossed the Atlantic before, let alone raced across any ocean, and only started sailing the Class40 on the delivery to Lanzarote.

Oakcliff Racing crossed the finish line on Friday 12th December to win IRC One and take second overall. There was an emotional scene on board as the team congratulated each other with handshakes and bear-hugs. Navigator Hobie Ponting spoke about the adventure. "That was epic. We have crossed an ocean and it's the first time any of us have done it and it feels fantastic. The last 24 hours was the hardest of all. We had very little wind and it was frustrating having spent days charging along at 20 knots. We have all worked so well together and we have finished this race better friends than we started. We don't know what day it is right now and a shower, some good food and a bed with sheets is top priority."

Two days later, on Sunday 14th December, Yacana crossed the finish line to take second in IRC One and third overall. Aref Lahham spoke dockside: "This adventure started in Greece over 5,000 miles away. When I heard about the RORC race, it was the ideal way to celebrate all the years we have sailed together. The camaraderie during the race was really memorable for me and when we crossed the line, we all got together and had a great moment. We have spent a lot of time smiling during the race and I am sure that will continue now that we have reached Grenada."

Nigel Passmore spoke dockside in Camper & Nicholsons Port Louis Marina about the race and why he decided to take part: "At the beginning of this race, we went through the hard bit and we had a blustery period mid-Atlantic and I remember one night at the wheel in well over 30 knots of wind. It was pitch black with torrential rain and difficult to read the waves. We didn't take the kite down or put another reef in, we kept pushing hard. You know you have to keep driving on if you are going to succeed. This is something I have wanted to do for 20 years or more."

Denis Villotte's French JNP 12, Sérénade, crossed the finish line on Friday 19th December with an elapsed time of 18 days, 20 hours, 01 minutes and 55 seconds. The three-man team on Sérénade was the final yacht to complete the inaugural race and was the winner of IRC Three.

"That was very hard," commented Denis. "The first half because of the changing winds and the second half because we were fighting against the light winds. For the last seven days we had just nine knots of wind and we had no spinnaker for the last three days. Both Alain and Pit were close friends before the race. I knew them but less, but we are all close friends now! This is my second transatlantic, the first one was a lot easier as we had much more regular and better winds. For this race, the variety of conditions has made it far more interesting from a navigational point of view. We are delighted to be here in Grenada to such a fantastic welcome in the middle of the night. We were just looking forward to making land and when we saw Grenada, our joy was huge, but to arrive with so many smiling faces was just incredible."

Tribute must be paid to the people of Grenada and the management and staff at Camper & Nicholsons Port Louis Marina. Every yacht, regardless of the time of day or night was greeted at the finish line by the marina and escorted to the dock for a warm reception and a cold beer and a basket of Grenadian goods, including Westerhall Rum. During their stay the helpful staff assisted with immigration, hotel accommodation, island tours and all manner of yacht services. The people of Grenada were just as welcoming. The RORC Transatlantic Race comes to an end close to Christmas, a time for goodwill to all and there is no finer a place than Grenada to experience that feeling of kindness.