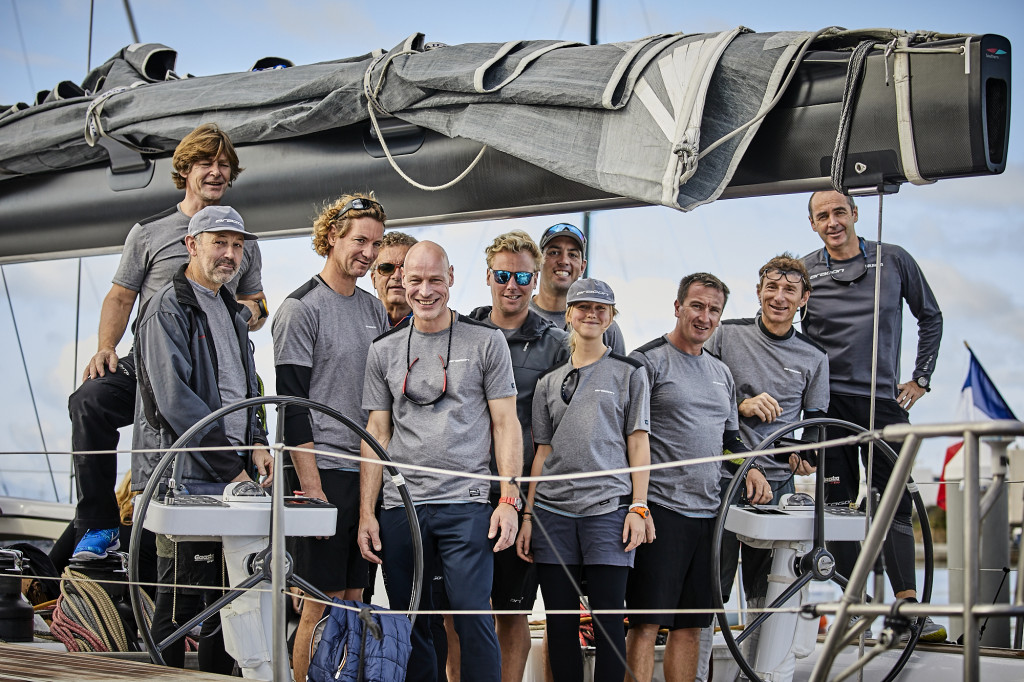 The crew of Aragon, winners of the 2016 RORC Transatlantic Race. Photo James Mitchell

Aragon Races to Victory
The third edition of the RORC Transatlantic Race, in association with the International Maxi Association, proved to be a tough challenge for the competitors taking part in a true ocean race. Highly unsettled weather produced confused seas and at times upwind conditions. The disruption of the normal trade winds produced a real challenge for a highly diverse fleet of yachts, racing with the Royal Ocean Racing Club from Marina Lanzarote to Camper & Nicholsons Port Louis Marina, Grenada.

Aragon had some tough moments during the 14 days racing in the RORC Transatlantic Race as co-owner, Andries Verder explained: “The weather was very challenging and that was the stressful part of the race; we were trying to save every second; this was a transatlantic race and we always had that in our minds. We blew out a few spinnakers, but we managed to keep up our speed and performance and we finished the race with everybody safe and sound. The boat performed very well as expected. A large part of that is excellent planning; without that, small issues can easily damage your chances of winning. We have a good spirit in the team and that friendship, combined with the preparation of a great boat, is a winning combination.”

Phaedo3 wins the High Speed Chase
Lloyd Thornburg's American MOD70 Phaedo3 took Multihull Line Honours in the RORC Transatlantic Race for the second year running. The American MOD70 completed the course in 6 days 13 hours 39 minutes and 55 seconds. Although the team was outside their race record set last year, Phadeo3 was well ahead of their rivals, Giovanni Soldini's Italian MOD70, Maserati.
Phaedo3 skipper, Brian Thompson, spoke on arrival in Grenada: "We’ve sprayed ourselves with champagne and now we are going to settle down for some late dinner in St George’s. It’s great to be here; the tree frogs are singing out, the reggae music is blasting out and we are very happy.”

Giovanni Soldini, skipper of Maserati spoke dockside: "It was a fantastic race. We’re delighted to have arrived into Grenada with the boat in excellent shape. We would have liked to compete up close with Phaedo3, but on the first night out we made different route choices, but it turned out we were wrong as it took us into a zone with less wind and we were 100 miles behind. But overall it was a positive experience and we are very happy with everything we learned about flying using the L-foil in the open ocean.”

“This is only my fourth transatlantic race since I started ocean racing 27 years ago,” explained Mike Slade. “In the past I just didn’t have many opportunities. Racing across the Atlantic is very special; you are at sea for many days and by the time you have finished, you have really gelled together with the crew. We are delighted to have taken Monohull Line Honours and it was also great to race against the ghost of Nomad IV; at one stage we were ahead, but unfortunately we didn’t see any trade winds until the last 24 hours. However it was exhilarating and at times quite scary, especially at night blasting along at over 20 knots in the pitch black. You are really flying along on the edge and if you get it wrong, you can spin out.”

"We knew there would be an important wind shift as we cleared the Canary Islands near the start, and the Traffic Separation Scheme (TSS) at Tenerife was also likely to affect the desired route. We stayed very high, while Eärendil stayed low and fast. As we approached the TSS, the wind shifted to our advantage. There was a lot of cloud activity around and we were probably luckier with the change in wind than Eärendil. Once we got away it seemed to pay to be ahead in the race. The rich got richer and as we were lighter, with just two crew and a watermaker, we had the advantage in the light patches. We have learnt so much from the race; we just have to remember it all.”

Table for Two
James Heald's Swan 45, Nemesis crossed the finish line of the 2016 RORC Transatlantic Race on the 18th day of the race, winning IRC Two Handed. James Heald and Ben Harris are both from Lymington, UK and battled against adverse weather, extreme fatigue and suffered significant sail damage to their yacht. The British duo were undaunted and arrived at Port Louis Marina dressed to impress in dinner jackets. Two pizzas and a crate of beer arrived from the Victory Bar Restaurant and the dynamic duo told their story dockside as they got stuck into the feast.

“About half the race was upwind and for a significant amount of time there was either no wind of 30 knots,” explained James Heald. “Having said that, we absolutely loved it and would gladly go straight back out there and do it again! The last three days we saw great trade winds, but the angle to Grenada was almost dead downwind, meaning a lot of gybes. The mainsail started to rip about 300 miles out so we got it down, stitched it up and downwind it was not really a problem, but upwind and the finish was quite different.

“Many thanks to Marina Lanzarote and Port Louis for their amazing hospitality. Ben is heading back to Lymington for Christmas and I am meeting the family in Grenada to cruise Nemesis up to Antigua for the RORC Caribbean 600.”

Canadian Spirit
Chris Stanmore-Major's Whitbread 60 Challenger crossed the finish line outside Camper & Nicholsons Port Louis Marina after 17 days at sea and just in time for the RORC Transatlantic Race prizegiving. Challenger is one of the sail racing school yachts owned by Spartan Ocean Racing, based in Nova Scotia, Canada. Skipper Chris Stanmore-Major summed up the aims and aspirations of the company in his last blog at sea, before crossing the finish line in Grenada.

“After 3,300nm we finally have Grenada in sight and the crew are elated. Whilst this has been a race and we have not won, the scale of the challenge we have completed is not lost on us. As a sail training boat we are exceptionally proud of what we have accomplished. People with wildly differing skill levels have come together from all over the world to race an ocean-going yacht, pushing as hard as we could within the bounds of the new skills we have developed.

“For the RORC Transatlantic Race 2017 we hope to return with up to eight boats, all Volvo 60's and IMOCA 60's, all with charter crews on board and all sailing within an agreed set of class guidelines that finally allow these boats to once again compete on a level playing field. Exciting? You bet it is.

“Finally my thanks to RORC who have once again put on a fantastic race and given us a bucket list experience everyone here will remember for a lifetime.”

“We love it here; Grenada is a beautiful island with wonderful people,” commented Eddie Warden Owen. “We have all had a fantastic welcome, but we will not be here next year. Next year's race will be to Virgin Gorda, BVI to celebrate Yacht Club Costa Smeralda's 50th anniversary. I speak for many people when I say we will miss Grenada. However, this is just an interruption and we are planning to bring the race back to Grenada in 2018 and we will keep coming back because we love the place.”

The 2017 RORC Transatlantic Race will start from Lanzarote, Canary Islands on Saturday 25th November 2017. The race will finish at Virgin Gorda, BVI with a Prize Giving at the YCCS Clubhouse & Marina Virgin Gorda, BVI.