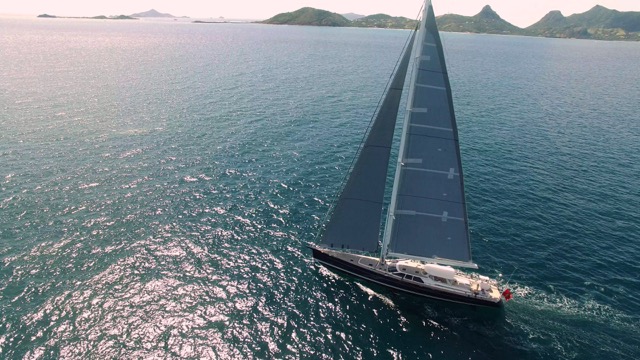 Bound for Camper & Nicholsons Port Louis Marina in Grenada, 2,865 nmiles across the Atlantic, the third edition of the RORC Transatlantic Race has once again attracted a varied fleet, from MOD70s to Maxis, four Class40s and everything in between from 40-112ft (12.19-34.14m). Veteran professional sailors will race on the same course as first time Corinthians; all making tricky tactical decisions to ensure the fastest crossing and keep the momentum going on this long, intense race. The race is a competitive adventure and on the bucket list of many sailors. For most, the passion to race never diminishes.

Calero Marinas prepare
As winter arrives in the Northern Hemisphere and sailors make the most of the tradewinds to head south for a season of Caribbean racing and the RORC Caribbean 600 in February 2017, Lanzarote in the Canary Islands is a hub for yachts preparing for their transatlantic crossing.

Marina Lanzarote in Arrecife is at its busiest now with an influx of yachts arriving over the past few weeks in time for the third edition of the RORC Transatlantic Race to Grenada, starting on Saturday 26th November. For the Calero family, which built and now manages Marina Lanzarote, it is a very special place and a way of life, as José Juan Calero, Managing Director for Calero Marinas explains:

“Our father developed Puerto Calero, Lanzarote's first marina, knowing that the combination of a great climate, a safe and relaxed culture, clean waters and breeze was a gift. He has instilled in us the importance of maintaining a clean and safe environment for visitors and we are lucky to have a great team, many of whom have been with us for well over a decade. As the first port of call in the Canaries, it’s a busy time for us of course, particularly in Marina Lanzarote which has been completely full at times over the last month, but as ever, the sailing crowd is a delight; seeing the crew of hi-tech foilers chatting with family cruising 40-footers is what it is all about.”

Spanish sailors on Path to Grenada
Having competed in four Volvo Ocean Races and with over 220,000 sea miles, Pepe Ribes is one of Spain's most experienced and talented offshore sailors. Pepe’s recent accomplishment was on board the 100ft Comanche, setting an East to West Transatlantic record. He has crossed the Atlantic at least 24 times and will be Boat Captain for Anatoly Karatchinski’s Baltic 112, Path for the RORC Transatlantic Race. The magnificent Super Maxi has crossed the Atlantic on seven occasions, but this will be the first time she has raced across any ocean. The crew will be a mixture of top Spanish professionals and a group of passionate sailors from all over the world.

“The greatest asset of Lanzarote is that you have wind and that is why the Volvo teams choose to train there,” explains Ribes. “The marinas have the draft to accommodate Path and Lanzarote has good food, good weather and good activities such as surfing and cycling. I have spent over two years living in Lanzarote and it is a wonderful place to live or to enjoy a holiday.

“Crossing the Atlantic from Lanzarote to Grenada should be a very enjoyable experience. We will be sailing most of the time downwind with good wind in a powerful boat. That is paradise for any sailor. To make sure the experience is enjoyable we must avoid breaking equipment. The preparation for that is essential and the team have spent many hours checking systems, deck gear, sails, checking everything. Also during the race, managing squalls is an essential area; reducing sail before the wind increases will be an important part. Behind the wheel on Path it is demanding; you need to keep your concentration, the spinnaker is huge, about 800 sq. metres and when you accelerate down an Atlantic wave, you really feel the power,” concludes Ribes.

Essential time on the water
Miranda Merron’s 6th place finish in the 2014 Route du Rhum was the final race in a fine career for Class40 N°101 in the colours of Campagne de France. Launched in 2011, the Pogo S2 won the Quebec Saint Malo Race the following year and posted several podium results in other races. However, with the development of new more powerful prototypes in the class, Halvard Mabire and Miranda Merron felt that it was time to consider a new boat; and so began their latest adventure. After managing the build themselves, they were aware of not being as competitive as they should have been in the Normandy Channel Race, learning that it’s hard to come out of an 18-month build and push a new and relatively untested boat as hard as the well-honed competition. Time on the water this winter is essential to improve boat and crew performance:

“The European season is over and a good way to keep racing over the winter is to head across the Atlantic to the Caribbean, so we decided to join the RORC Transatlantic Race,” explains Merron whose longterm goal is to race in the 2018 edition of the Route du Rhum on a boat she will know inside out. 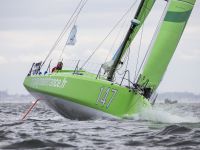 Talking about the decision to build and manage their new boat, Mabire says: “With the support of our sponsor, Campagne de France, we have taken full control of our own destiny by designing and building a race boat based on our years of experience and within our means.

“Our financial situation was one of the driving forces; we didn’t have the means to entrust the entire build to a well-known boat-building facility, but above all, even though we knew we were embarking on a difficult road, we were confident in our ability to rise to the challenge together. I have been building boats and been on the design side for more than 40 years and I was also aware of the extraordinary opportunity to be able to put all my knowledge and aspirations into this project. It’s the chance of a lifetime that I have been given here, and I am doing my utmost to bring it to fruition,” concludes Mabire.

Campagne de France will be racing against three other Class40s in the RORC Transatlantic Race: Marc Lepesqueux’s Sensation Class 40.2 and his older boat, Sensation Class 40, plus Catherine Pourre’s Class40 Mach40.3, Eärendil, before retuning from the Caribbean in time for the 2017 Class40 European season, which includes the Rolex Fastnet Race in August, organised by the RORC. 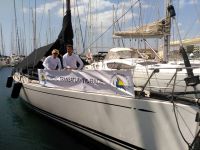 Another team attempting the transatlantic crossing shorthanded will be James Heald’s Swan 45, Nemesis who is sailing with friend, Ben Harris in the Two Handed division.

“The two of us sailed the boat from St. Tropez to Lymington after we bought her and since then she has been modified to be more suitable for Two Handed racing, especially with respect to the sails and associated rigging,” says Heald. “I have crossed the Atlantic before but it has always been a passion of mine to race across Two Handed. Ben and I sailed the boat non-stop from Lymington to Lanzarote a few weeks ago and we are really looking forward to the race. Once Nemesis is in the Caribbean she will be used both as a cruising boat for my family and for racing in future seasons. The RORC Transatlantic Race is ideal for our needs. I wanted to take part in a real race Two Handed and as we want a family Christmas in Mustique, the finish at Grenada works very well.”