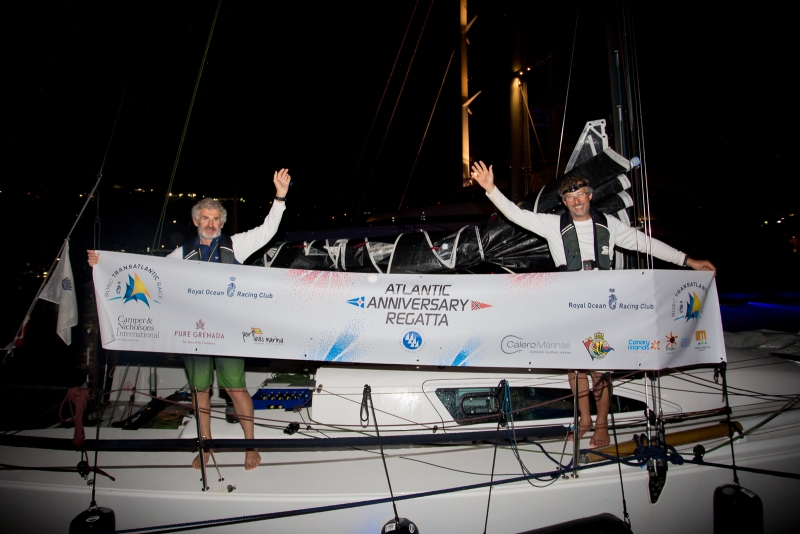 Richard Palmer's British JPK 10.10 Jangada, racing two handed with Rupert Holmes has finished the RORC Transatlantic Race in an elapsed time of 21 days 17 hours 32 mins 55 secs and is the winner of IRC Two and IRC Two Handed. Whilst yachts are still racing, none can better Jangada's IRC corrected time. Camper & Nicholsons Port Louis Marina gave the triumphant duo a warm welcome, as is customary for every arrival in the RORC Transatlantic Race:

“The race took significantly longer than anticipated, but our preparation and anticipation for the race saw us through without any big issues. Rarely do you finish a race before the predicted time and the reality is you often finish after it,” explained Richard Palmer dockside after the finish. “Before the start, our routing showed little difference between going north or south. However, the route to the north was less stable with low pressure systems to contend with. Whilst by going south and once through the transition zones, the north easterly tradewinds were relatively far more stable. We worked extremely well as a team; if you saw dark clouds behind the boat it was re-assuring to call down below and get an immediate response. The one time I didn't, we had a spectacular broach, so I learnt that lesson well. Arriving in Grenada to such a great welcome was fantastic, but we only managed to drink half the beer before drifting into a long sleep.”