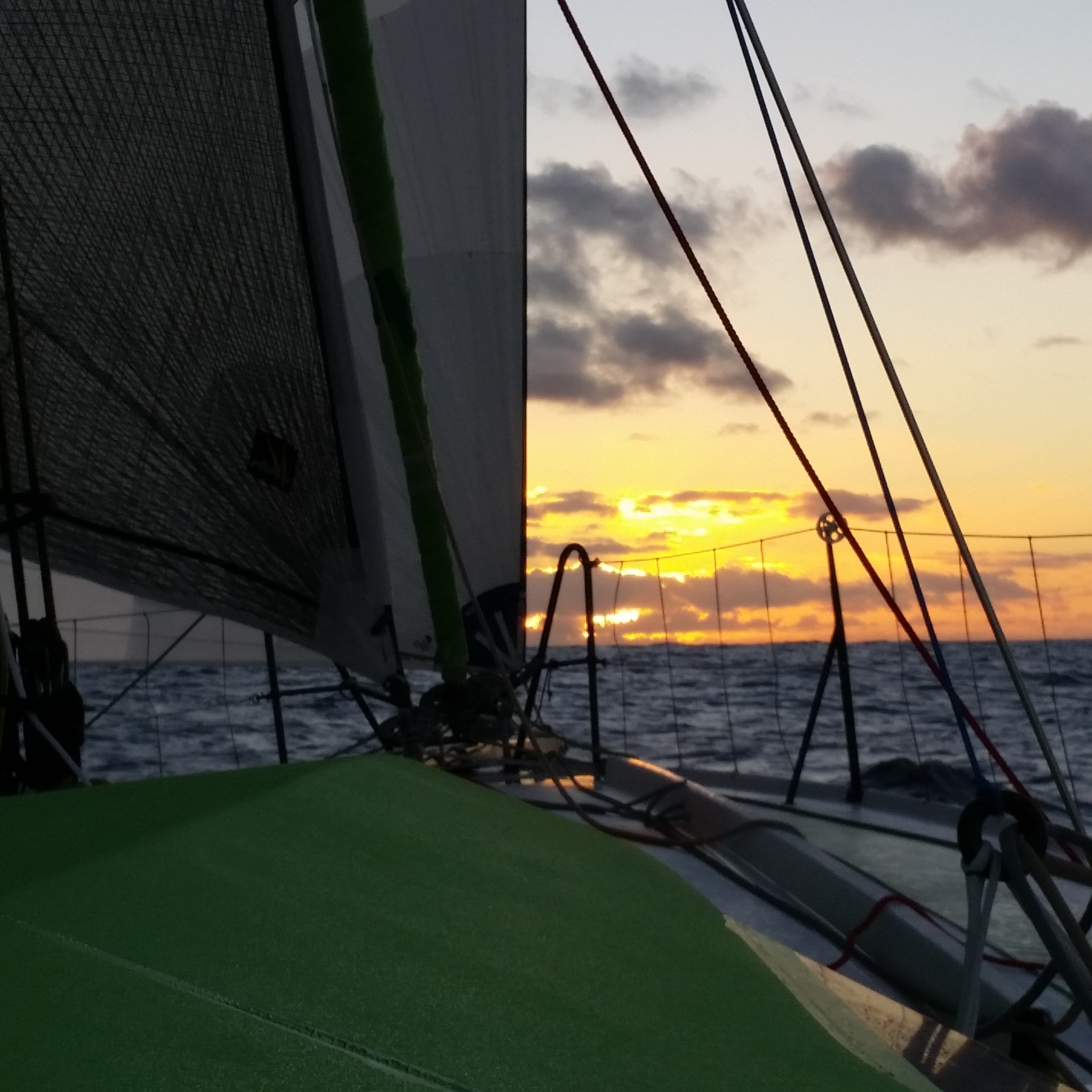 Last email from phone if I can get it to connect. We escaped relatively unscathed from the last squallmonster which then parked itself against the mountains of Tenerife, swallowing everything behind.
Now sailing between La Palma and Gomera, and hope the wind shadow of the former doesn't eat Campagne de France.

Almost dawn, a long night of slamming upwind (Class40 hell). At least we don't have to sit on the rail hiking out... Wind going from 10 to 20+ knots, occasional short squalls. Two tacks to avoid the forbidden traffic separation schemes (there are a few ships around but not in the TSS) and Tenerife. Complicated weather and no trade winds in sight. So we shall read the tea leaves. A little hard to keep tea in the mug with all this bouncing around! Campagne de France somewhere north of Tenerife

Cap West, charter company (racing and cruising boats) and offshore sailing practise on Class40, is entering two Class40 FRA26 - SENSATION CLASS 40 and FRA140 - SENSATION CLASS 40 - SECONDE CHANCE on the third edition of the RORC Transatlantic race.
FRA 26 was on the first edition two yaers ago with Class 40 and figaro solo sailor, Marc LEPESQUEUX as skipper and customers crew and crossed the line in Grenada before a Volvo 60.
On saturday, Marc won't be there but would like to be! Kai WEEKS, from sweden, will be skipper of FRA26 - SENSATION CLASS 40 will with an amator crew : Thierry, Arnaud, loic, Philippe & Samir.
The second Class 40', FRA140 - SENSATION CLASS 40 - SECONDE CHANCE, Marc's new one who lost its' keal the first night of the 2014 Route du RHUM solo handed race, will be managed by Laurent PELLECUER (15 entries on the solo handed Figaro race...). He was Marc's co-skipper on the Normandy Channel race (1000 milles from Normandy round Fastnet race and Tuskar rock) in last september and the finished 5th over 27 Class 40'. His crew, chartered the boat. Patrick, Didier, Philippe, Pierre and Frederic were very exited to cross atlantic with trade winds. But no trade winds for the beginnig of this RORC transatlantic race.
After the race, the Jumbo 40, FRA26, helmed by Kai, will sail back to Europe from St Maarten (start January 07) back to Normandy with a stop in Azores. A fast and tough sailing that Kai and the Jumbo 40 did also with customers, last winter.
The new and powerful Sabrosa 40 FRA140 - SENSATION CLASS 40 will be in Antigua for the Caribbean RORC 600 expecting well instaled trade winds. Marc will be skipper and will cross back to Normandy just after the RORC 600 (start February 26th) from Antigua.
After winning the Cowes Cherbourg race in Class 40, Marc would like to sail well in 2017 RORC races. Fastnet Race, Myth of Malham, Cowes Dinard, Cowes Cherbourg, Morgan Race are part of SENSATION CLASS 40' porgramme .. That are fast and furious sailing experiences for customer's.