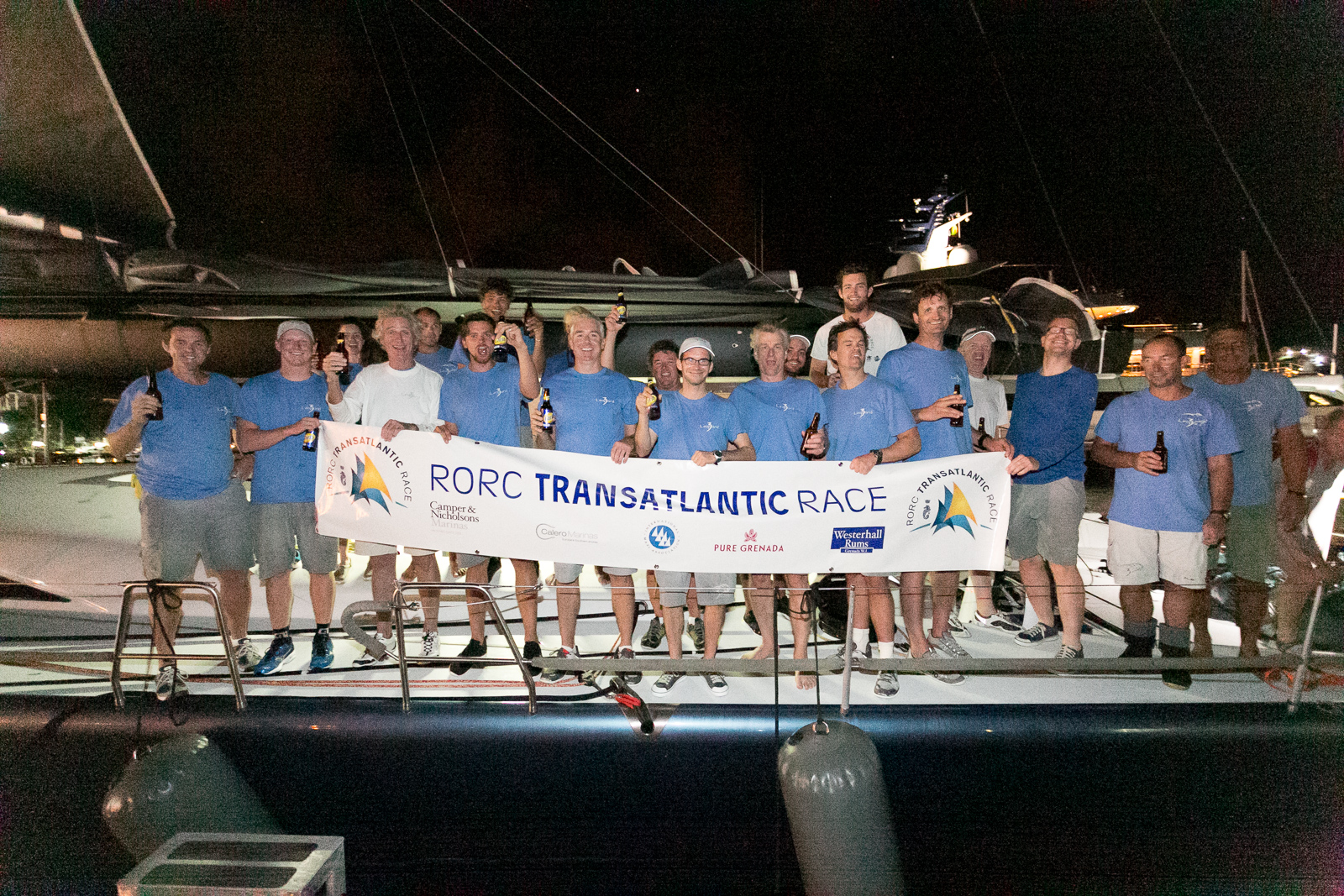 Mike Slade's British Maxi Leopard 3 crossed the finish line outside Camper & Nicholsons Port Louis Marina, Grenada at 07h 22m 37s on 7th December 2016 GMT, taking Monohull Line Honours and winning the International Maxi Association (IMA) trophy for the 2016 RORC Transatlantic Race. The RORC Transatlantic Trophy will be awarded to the yacht posting the best corrected time under IRC. Leopard 3 has set the bar and must now wait to see if their corrected time can be beaten.

“This is only my fourth transatlantic race since I started ocean racing 27 years ago. In the past I just didn’t have many opportunities,” explains Mike Slade. “Racing across the Atlantic is very special; you are at sea for many days and by the time you have finished you have really gelled together with the crew. In the middle of the Atlantic you are miles away from anybody and you can let the whole damn world get on with itself. We are having fun, racing hard as a team and that is a very nice feeling as it takes you out of your normal self. 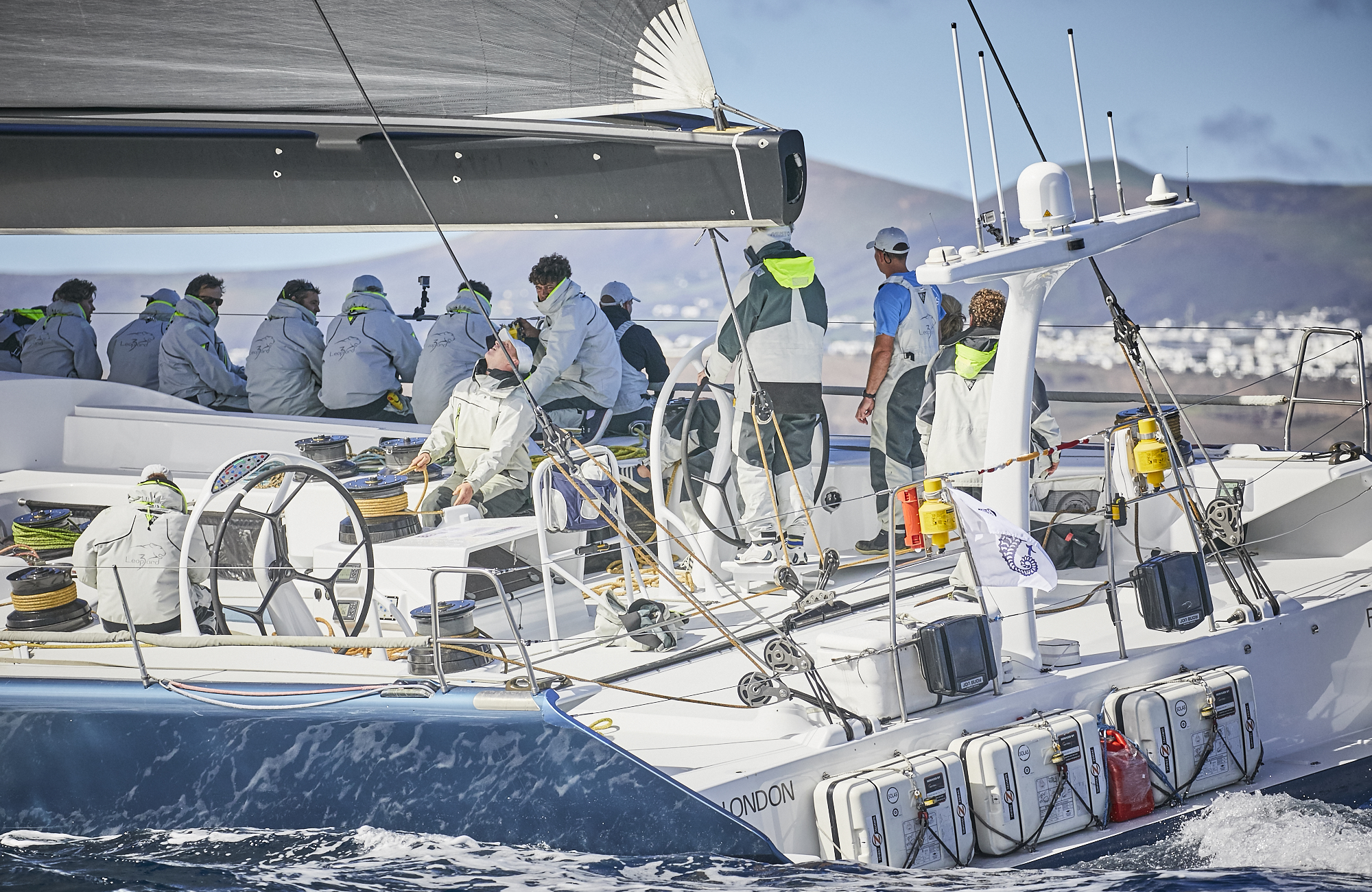 240 miles from the finish in Grenada: Mike Slade at the helm of Leopard3 © RORC/James Mitchell

The trade winds are back to normal, accelerating the speed of the yachts racing in the RORC Transatlantic Race. Mike Slade's Leopard is set to take Monohull Line Honours tomorrow (Wednesday 7 Dec). Campagne de France hold a big lead in the Class40 Division and several yachts survive the attack of the flying fish.

At 1200 UTC Mike Slade's British Maxi, Leopard3 was 240 miles from Camper & Nicholsons Port Louis Marina, Grenada and expected to take Monohull Line Honours at around sunrise on Wednesday. Leopard is nearly 600 miles ahead of their nearest rival, Arco Van Nieuwland & Andries Verder's Dutch Maxi Marten 72, Aragon. Leopard is all but assured of the IMA Trophy for Line Honours and is estimated to be leading the fleet after IRC time correction. However with the trade winds re-establishing for the fleet further out to sea, Aragon still has the potential to post the best corrected time under IRC to win the RORC Transatlantic Race Trophy. Infiniti 46, Maverick still has 1,000 miles to go, but the radically designed flyer is showing her potential, surfing down Atlantic swell at high speed. 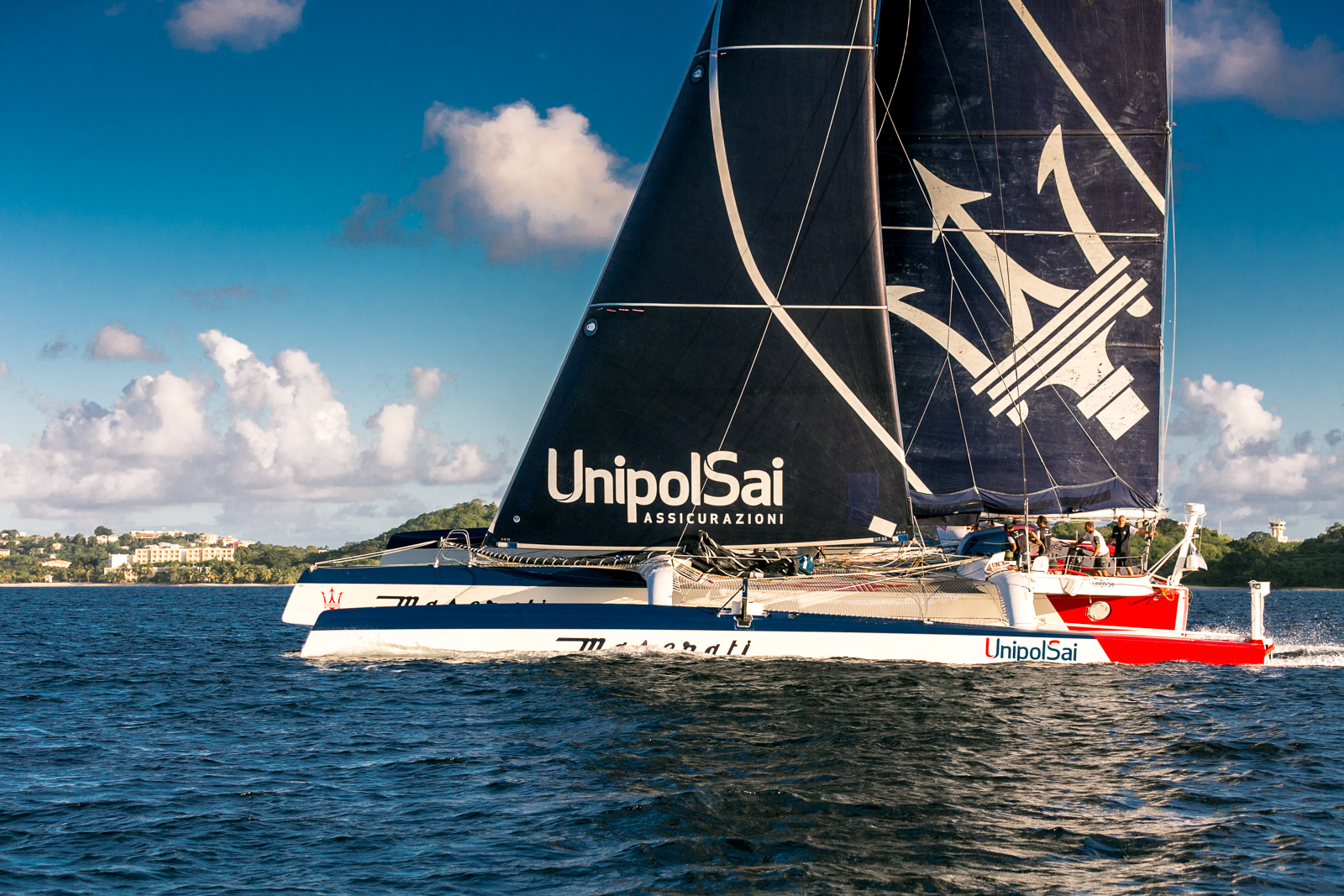 The Italian MOD70, Maserati has finished the RORC Transatlantic Race; Phaedo3 has been declared the winner of the Multihull Trophy and Mike Slade's Maxi, Leopard is on the hunt for the monohull record.

Giovanni Soldini's Maserati crossed the finish line on Saturday afternoon, completing the RORC Transatlantic Race and their first ocean race in the MOD70 in 7 days, 8 hours, 44 minutes and 23 seconds, taking second place in the Multihull division. She is now safely moored in the beautiful confines of Camper & Nicholsons Port Louis Marina, Grenada after being welcomed by the RORC Race team, Marina Manager Glynn Thomas, his staff and Grenada Tourism on the dock. Phaedo3 skipper, Brian Thompson was also on hand to take Maserati's lines as they arrived and a prize giving ceremony in the Victory Restaurant, Port Louis followed shortly after. Taking the Multihull line honours, Team Phaedo were awarded the Multihull Trophy as winners of the Multihull Class by Andrew McIrvine, Secretary General of the IMA and Admiral of the Royal Ocean Racing Club. 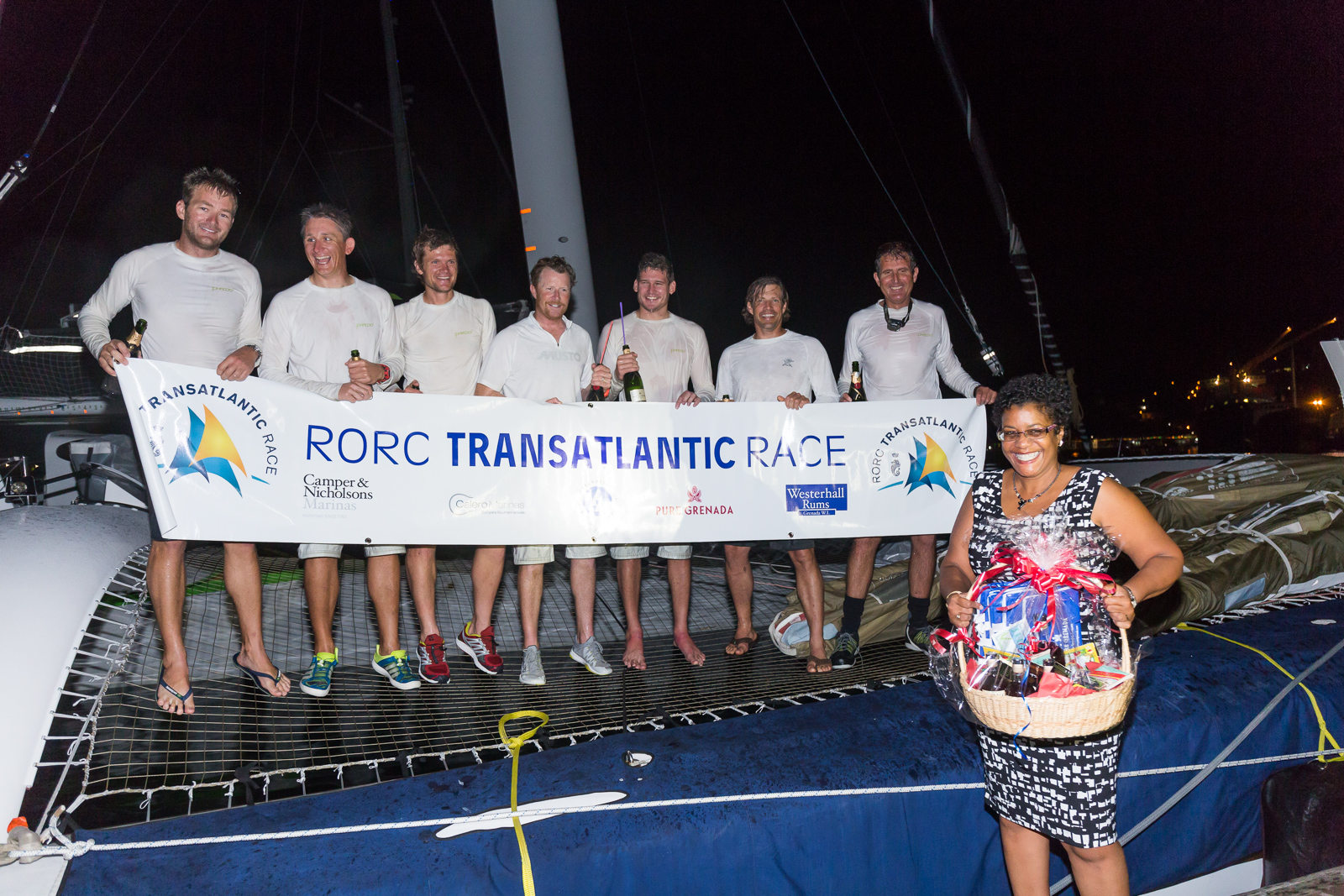 Phaedo3 does it again! A fantastic spice island welcome in Grenada for the team as they complete the 2016 RORC Transatlantic Race © RORC/Arthur Daniel

Lloyd Thornburg's American MOD70 Phaedo3 has taken Multihull Line Honours in the RORC Transatlantic Race for the second year running. The American MOD70 completed the course in 6 days 13 hours 39 minutes and 55 seconds. Although the team was outside their race record set last year (5 days 22 hours 46 minutes 03 seconds), Phadeo3 is well ahead of their 2016 rivals, Giovanni Soldini's Italian MOD70 Maserati, which is expected to finish the race later today.

"Friday evening and we’ve just arrived into Grenada at the finish of the RORC Transatlantic Race from Lanzarote. We’ve sprayed ourselves with champagne, given Pablo (Pete Cumming) a birthday cake and now we are going to settle down for some late dinner in St George’s. It’s great to be here; the tree frogs are singing out, the reggae music is blasting out and we are very happy to be here. We had a great last day in the race with 15-17 knot tradewinds; quite gentle, clear skies and then as we approached Grenada, a beautiful crescent moon and Venus setting in the west in front of us. We arrived three or four hours after sunset and it was a very, very good arrival. There were lots of people to welcome us on the dock.

Lloyd Thornburg's American MOD70 Phaedo3 is flying towards Grenada's Camper & Nicholsons Port Louis Marina and expected to touch down in about 24 hours. Mike Slade's Maxi 100 Leopard 3 is racing against the clock in an assault on the race record. The IRC Fleet and Class40 Division are getting a savage taste of ocean racing. 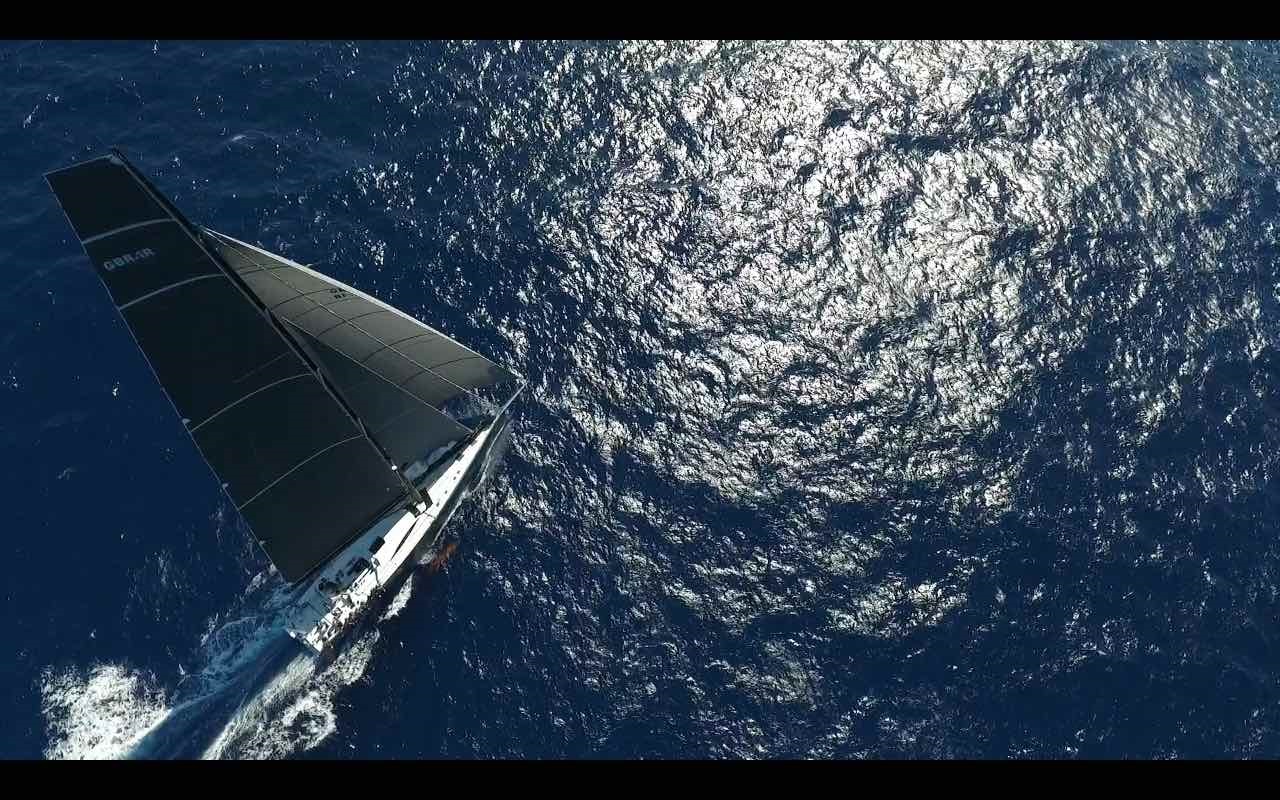 Mike Slade's, Leopard 3 charging along at 16 to 20 knots in the RORC Transatlantic Race. Kolja Frase captured this fantastic transatlantic image with a drone as the Maxi closes in on the spice island of Grenada © Leopard3/Kolja Frase