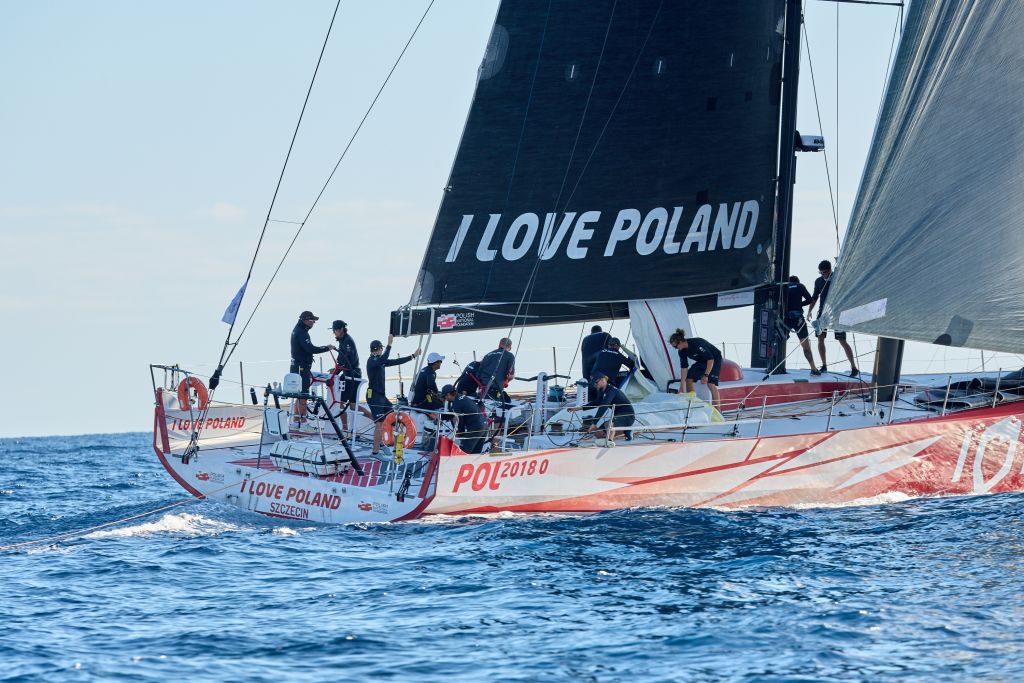 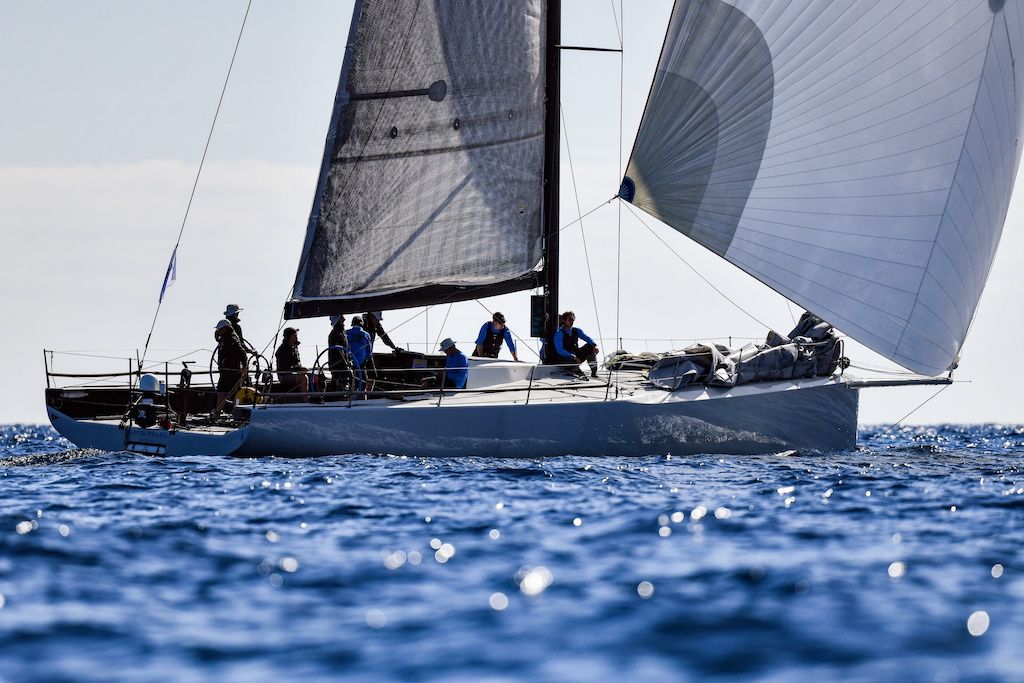 At 0800 UTC on the eighth day of the RORC Transatlantic Race, 17 boats are still racing in the Atlantic, with the first finishers in the monohull fleet expected  on the 17th and 18th of January. The battle for the overall win under IRC  and the RORC Transatlantic Race Trophy is beginning to sizzle. There is a clear leader on the water, vying for the IMA Transatlantic Trophy; Volvo 70 I Love Poland (POL), skippered by Grzegorz Baranowski. (Lead image: Botin 56 Black Pearl (GER), sailed by Stefan Jentzsch. © James Tomlinson/RORC) 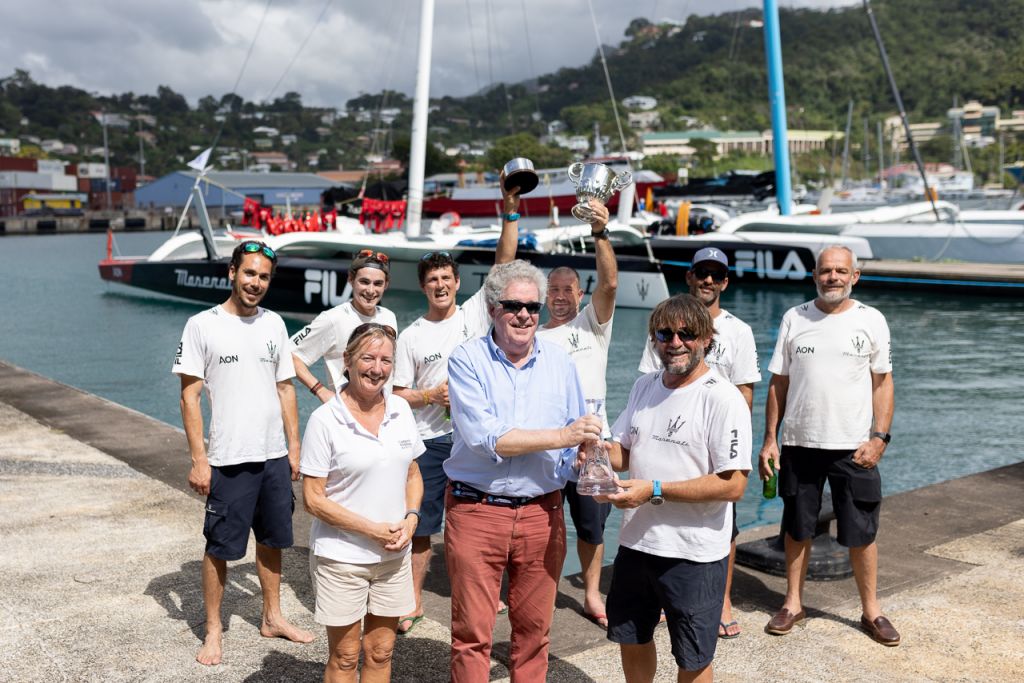 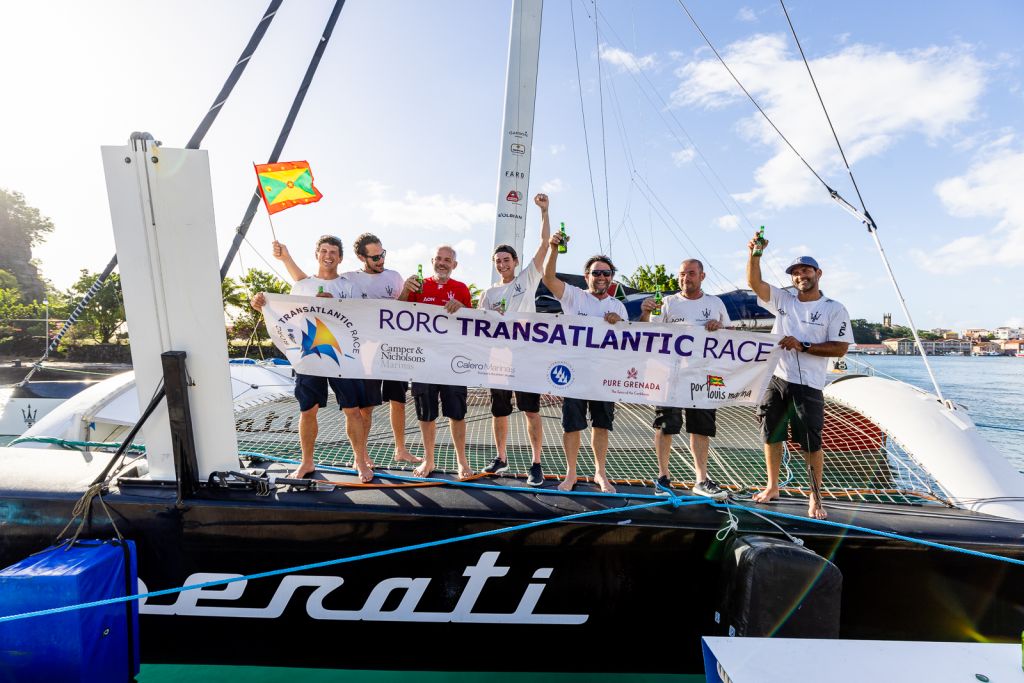 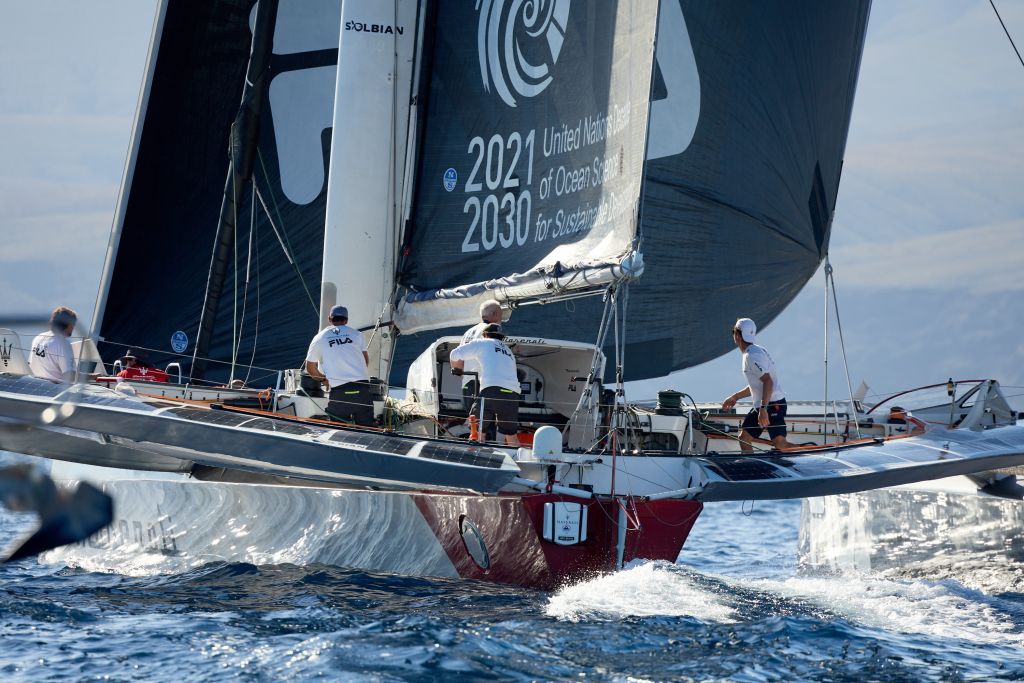 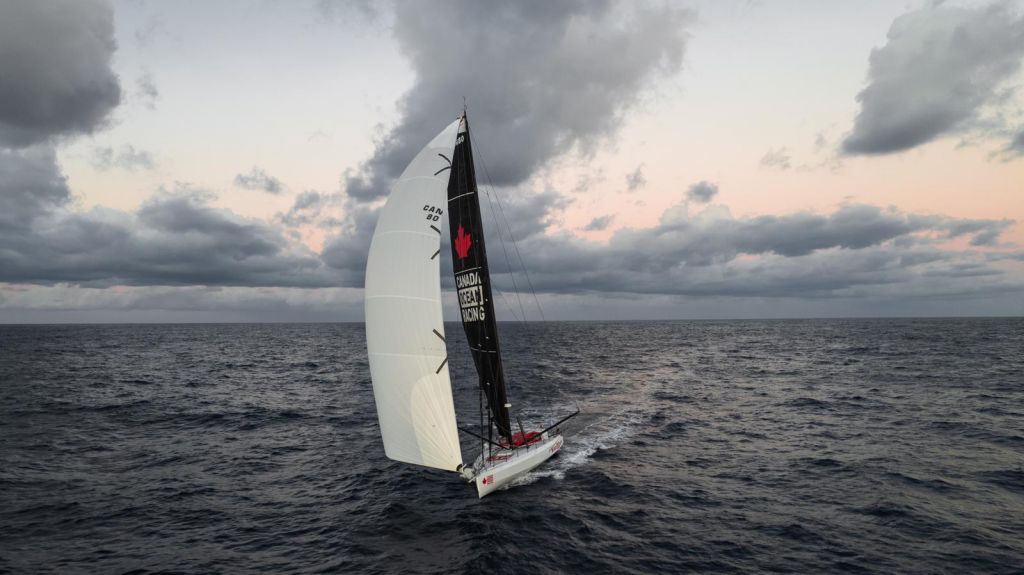 At 1200 UTC on the third day of the RORC Transatlantic Race all of the teams have now left the Canary Islands and should not see land again until they arrive in the Caribbean. 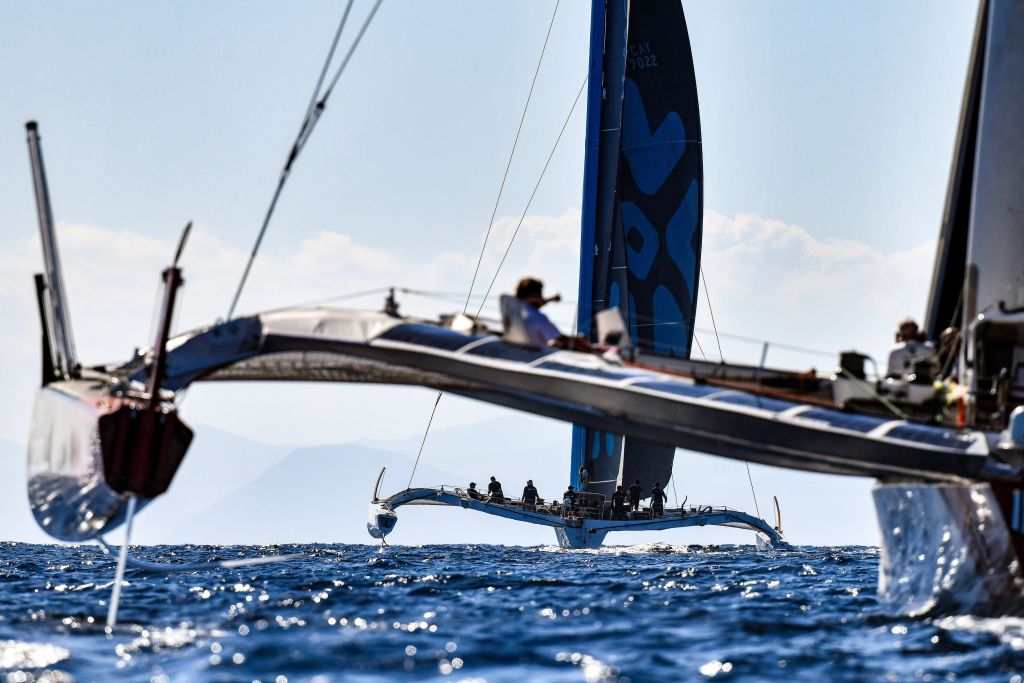 At 1000 UTC on the second day of the RORC Transatlantic Race, three 70ft trimarans are now powered up on a tight reach, blasting through the Atlantic Ocean. 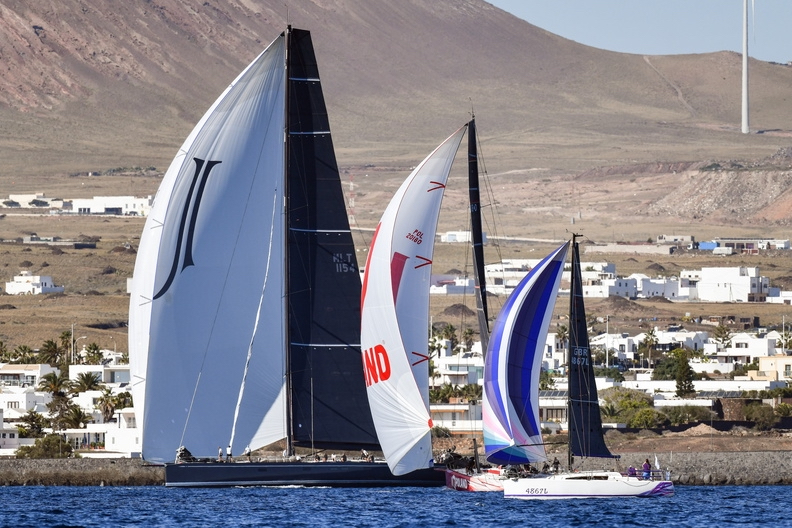 Sunday 9th January, Lanzarote: A flotilla of spectator boats and a huge crowd in Marina Lanzarote witnessed the start of the 2023 RORC Transatlantic Race.

The 9th edition of the RORC Transatlantic Race starts from Marina Lanzarote on Sunday 8th January, supported by Calero Marinas, the International Maxi Association and the Yacht Club de France.

Crews are in final preparation for the 3,000-mile race to Camper & Nicholsons Port Louis Marina in Grenada, with navigators and tacticians studying the latest weather data. While they almost unanimously agree that the 2023 race has the potential to be the quickest on record, the important factors and strategy differ throughout the diverse fleet.

The largest boat in this year’s RORC Transatlantic Race is the Swan 115 Supermaxi Jasi. Navigator Tom Robinson has prepared for the race with a very detailed look at historic weather data for the route.

“This year’s race is looking like a very stereotypical trade winds route, with the wind very well established,” commented Robinson. “The first 36 hours could be a bit tricky; especially Tenerife which rises to 3,700 metres. We want to get south without getting caught in the wind shadow before we can start getting west. High pressure may see us going north to hook into better wind from the east northeast, before we start heading back down to the rhumb line. I'm quite pessimistic when people asking me how long it will take for Jasi to finish in Grenada; maybe between nine and ten and a half days. However, it really depends on how the second-half of the race unfolds.” 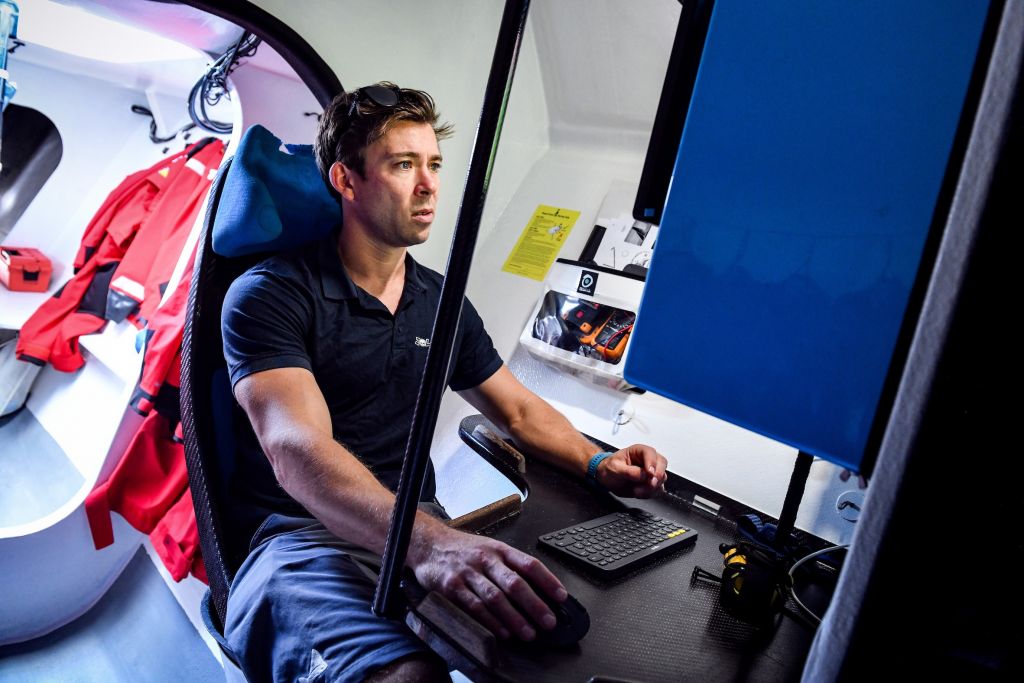 Three high performance trimarans will be in a high-speed battle for Multihull Line Honours. While all three were originally MOD70 one-designs, they have all been optimised. Maserati Multi70 has a full foiling package, Snowflake has an additional two-metres of rig, and Zoulou is equipped with C-Foils at mid-ships for additional lift. Ned Collier Wakefield is one of the most experienced MOD70 drivers in the race and will be part of the formidable crew on Zoulou which is ramping up for a thrilling 3,000 mile shoot-out.

“It is looking like a pretty fast race, with no northerly route open which is great,” commented Collier Wakefield. “The trade winds look set, so it should be point and shoot VMG all the way at record pace. This year’s forecast is better than the record in 2015, and all three trimarans are configured to sail quicker than the record holder. (Lloyd Thornburg’s MOD70 Phaedo3, 5 days 22 hrs 46 mins 03 secs). This year we could see a finish in 5 days 20 hours beating the record, but with good competition for Zoulou from Maserati and Snowflake, we have got a boat race!”

“At first it is looking like real champagne sailing, at least until we past the Canary Islands; full downwind VMG racing in 15-25 knots of wind,” commented Laurent Pages. “However, it's going to require a lot of commitment from the crew, especially driving and boat handling. Even though the wind direction is looking quite stable, this is going to be a very physical race where we need to have precision in our positioning, also we will have to deal with squalls. The main, aim as always, will be to sail as fast as possible, and getting to an area of good wind, which is forecast to the south, will be a crucial point in the early part of the race.” 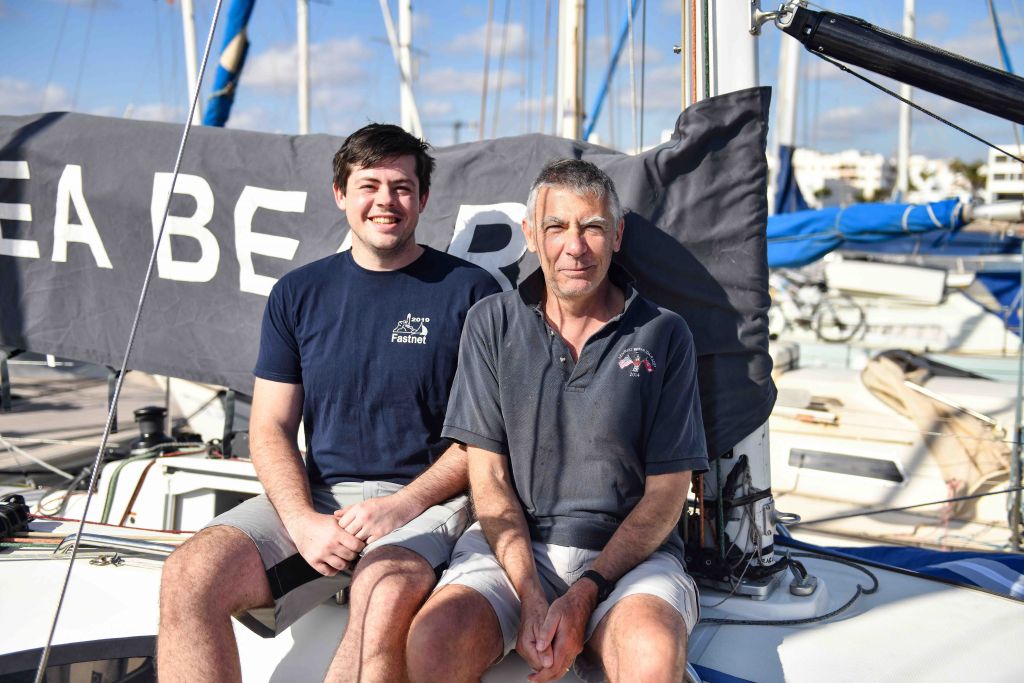 Peter Bacon is racing Sun Fast 3300 Sea Bear in IRC Two-Handed with his son Duncan. As one of the smallest boats in the race, Sea Bear’s weather outlook, as well as strategy differs from the faster boats. However, Sea Bear can win the race overall under IRC, just as Richard Palmer’s Jangada did in 2019, racing with Jeremy Waitt.

Looking at the current weather models we could have a light north-easterly wind for the start and that may persist for a day or two as we go through the islands,” commented Peter Bacon. “As we get towards Tenerife we will have a decision to make; do we go south to try to get the trade winds, or do we follow at least one model’s advice and stay north to pick up stronger winds. This second model shows that later in the week if we go north, there may be good winds between a high pressure and low pressure system. Right now, I don't know the answer.” 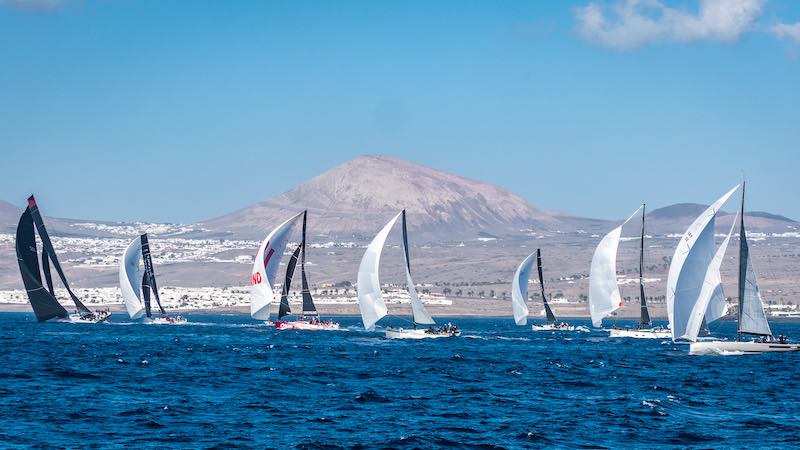 Near perfect, record conditions are forecast for the start of the RORC Transatlantic Race, supported by Calero Marinas, the International Maxi Association and the Yacht Club de France.