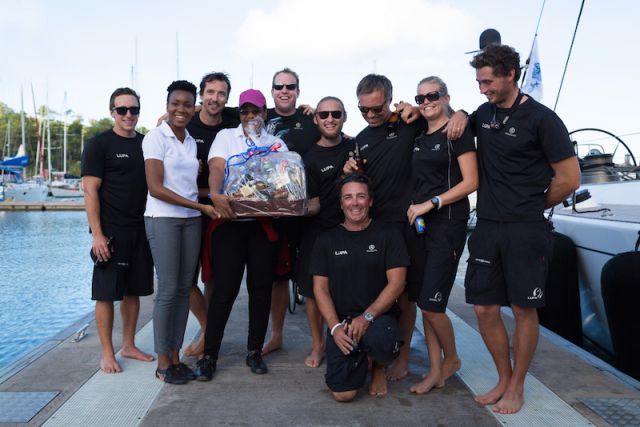 Speaking of their victory after the finish, Skipper, Daniel Stump from Isle of Wight, UK said:

“We were only eight crew, but they are some top sailors with great commitment and willpower. We worked really hard and seamlessly together to get the boat going as fast as we could and I am really proud of all the crew. I was running one watch and Jonny Malbon was running a slightly stronger watch as well as the navigation, and Jonny did an awesome job on that score. On the delivery to Puerto Calero, Lanzarote, I sat down with Jonny in Gibraltar and in our dreams we wanted to win Line Honours and the overall win, but that was a big call. Winning Line Honours is a dream and we have a great shot at winning the race overall.”

Jonny Malbon, Lupa of London’s Navigator explained their game plan for the fight to the finish with Windfall:

“We haven't got an A2, so we have been handicapped by light breeze and about half way across, we were in light airs to the south and we were level pegging with Windfall, but we knew we had to take a chance or they would get away. We gybed north looking for better pressure and it did fill in and when we gybed back, we were golden. If we had not found that pressure, it would have been all over for us. It was a risky move to breakaway from Windfall and we had to go north for 12 hours on an unfavourable gybe, but it really worked out for us.

“200 miles or so from the finish, we had our game plan and we were very surprised at the route taken by Windfall. We were cautious about covering them, but at the same time, we were cautious of the Class40, Oakcliff Racing who was a challenge for the overall win. Every model was telling me the opposite action to Windfall was the way to go, even when I routed it from their position, it didn't make sense as they were sailing more miles and away from the finish.”

Fred Pilkington, who was competing in his first ever yacht race on his father Jeremy’s boat: “Before the start, I tried not to have any expectations because that can easily result in being disappointed. My attitude was get on board and give it a go and it has been absolutely awesome. I have really enjoyed it. I am a serious novice and I have learnt a hell of a lot in the last 10 days. One of the main things is the 'nitty-gritty'. How all the systems work, but also the finer points of steering the boat and trim and how much difference that attention to detail can make on performance. This has been a lifetime experience and I am so glad that I was part of a great team.”

Southern Wind 94 Windfall also finished at 14:53:48 just over three hours behind Lupa of London. The Russian team, skippered by Fabrizio Oddone, will be delighted to have completed the race after 11 days at sea.

The rest of the fleet are still racing with the next finisher likely to be American Class40 Oakcliff Racing, skippered by Hobie Ponting.