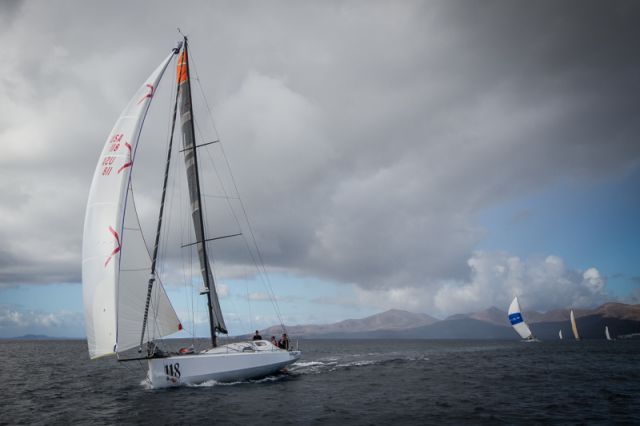 “Go south until the butter melts” - is a mantra that has been followed by transat sailors for many years, but with modern-day racing yachts, sophisticated weather routing and access to high resolution weather forecasts, this rudimentary rule can be expanded and, at times, left on the side plate.

After five days and four nights at sea, the front runners in the RORC Transatlantic Race are approaching halfway. The rest of the fleet are behind them, some as much as 500 miles, but the vast Atlantic Ocean is their only vista, save glimpses of wildlife including flying squid (See blogs). Mid-Atlantic is one of the furthest distances from land attainable on our planet. In this remote location, the yacht becomes the crews' transient home.

Weather models are producing a fascinating conundrum ahead with three options available. North, an area of low pressure is developing. It may be too far away to affect the fleet, but if the forecast path is further south, then the advantage gained by a northerly position would be significant. To the south, an area of stable high pressure is developing from the east. This is the typical trade wind, emanating from Africa, and a safer bet than the unusual activity to the north. The third option is the rhumb line, undoubtedly the shortest route to Port Louis Marina, Grenada, but possibly not the fastest.

The battle continues at the front of the fleet between Jeremy Pilkington's RP78, Lupa of London, and Russian Southern Wind 94, Windfall, skippered by Fabrizio Oddone. The two Maxis are neck and neck for the lead on the water. Side by side the two powerful yachts are surfing down Atlantic rollers, achieving double digit boat speed day and night, contesting Line Honours for the inaugural race and the honour of being the first yacht to be inscribed on the IMA Trophy.

Lupa of London has shown impressive speed against her rival Windfall. Although the yachts are evenly matched for speed, Windfall has the advantage of waterline length (94ft/28.65m as opposed to 78ft/23.77m) but Lupa of London has the better sail wardrobe, honed through double triumphs at the Rolex Mini Maxi World Championship. Derek Hatfield's Canadian Volvo 60, Spirit of Adventure, gybed south into good pressure yesterday morning and is a respectable 120 miles behind the leaders after five days.

Two Class40s have taken up the running at the front of the seven-yacht fleet in IRC One, Two and Three. American Oakcliff Racing skippered by Hobie Ponting is 28 miles ahead of Marc Lepesqueux's French Class40 Sensation Class 40. Aref Lahham's Swan 68, Yacana, gybed south yesterday before dusk followed by Nigel Passmore's British J/133, Apollo 7. The two yachts may be trying to hook into the trade winds south of their position. Frank Lang's French X 40, Optim'X, is heading north, gambling on the wind speed accelerating their boat speed. It will be interesting to see how these different approaches pan out.

The teams taking part in the RORC Transatlantic Race are encouraged to send blogs from the boats, adding colour to the life at sea for race fans. You can read them all on the race minisite. Here are some examples:

Some of the Russian sailors on board the Southern Wind 94, Windfall are doing their Yachtmaster Ocean theory course during the race. Posted 3 Dec – “All good on board! We are sailing with full main and A2 in 16-18 kts from 75°-80°. Tonight we gybed, temporary abandoning our initial plan to sail northern of the rhumb line towards the high pressure. Wind proved to be slightly different than forecasted and a delayed gennaker peel slightly slowed down the progress overnight. Lupa of London with a more generous wardrobe is proving to be a very tough competitor. They are sailing well and they are very fast in lighter air, even faster than us when they can deploy code zero, as they successfully did in the first part of the course. Francesco Mongelli (Navigator) recognizes that the next 2 days will be difficult against Lupa but towards the end of the week, a stronger breeze should allow Windfall to sail faster.

Every member of crew is very busy: sailing is the only activity. Vieri Mannucci, RYA instructor on board is pushing his pupils hard and they are behaving well, fighting to achieve the Ocean Yacht Master. When Vieri relaxes or rests, Francesco Mongelli kicks in with his routeing and performance navigation training!”

Posted 4 Dec: “All going well so far and the atmosphere onboard is nice and relaxed, today is the 4th racing day and even if the first 36 hours was not very comfortable due to the wind, the boat is still in a very good shape. The crew did a great job changing sails and jibing mostly in night time when the moon was not always clear from clouds. The tuition is going very well, despite the first 36 hours when it has not been very comfortable to do paperwork below deck. Now the use of the sextant becomes friendly for everyone, even if the GPS is winning the bet (it's much cheaper and easier to use!). The expectation now is for cloudy days, so the ‘astro machine’ will have some rest in her box. We just met Lupa in the middle of nowhere and our conversation has been about Nomad, we both are glad to know that the crew is OK and both sorry about their retirement.”

Class 40, Oakcliff Racing (USA) - “Ocean racing is really an amazing thing. First off, sorry we are behind on the updates, the first few days on board are always the toughest. The body is not used to the sleep schedule and the mind is not used to so much time to think. It's 8:53 (am or pm I wonder???) on day 4 and we are all beginning to embrace the amazing opportunity we have. Day 1 was out of the gates quick to be greeted by 25 knots upwind in 5m waves. To give an idea of the conditions, I'll quote a crew member” “I can't wait to get an office job.” Day 2 was the start of the downwind work which we have been enjoying since. Day 3 we took a jibe south to consolidate with the fleet and ensure we are in the developing trades. The dive meant a position hit, but it needed to happen. Overnight we jibed back onto starboard and crossed within 200 m of Yacana, a Swan 68. We have forgone fishing for birds at the moment as we are anticipating new frontal zones...only kidding about the fishing...for birds.”