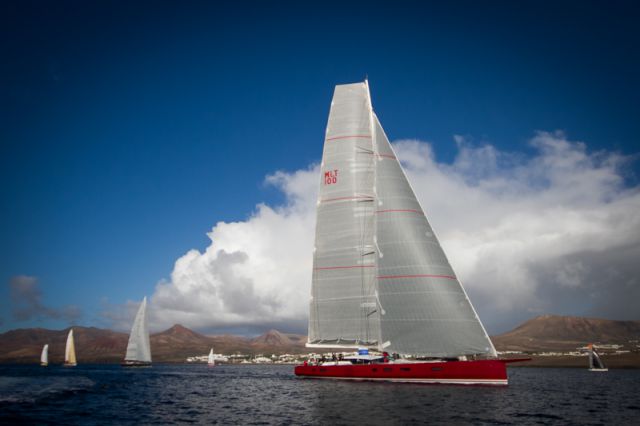 After leading the fleet out of the Canary Islands yesterday afternoon the Finot-Conq 100, Nomad IV, sailed by Jean-Paul Riviere, was leading the race until gear failure forced the French Maxi to head back to the Canary Islands for repairs. All of the crew are safe and well. At about 2000 UTC on Monday 1st December, Nomad IV was approximately 110 miles south west of La Palma when the RORC Transatlantic tracker showed the boat had turned around and was heading back towards the Canaries.

At 2138 UTC, Nomad IV contacted the RORC Race Committee by satellite link to report that the boom of the 100ft Maxi had broken but that all were safe on board. The RORC Race Committee have remained in contact with Nomad IV and it is understood that the crew do not require assistance and plan to head back to the Canaries, probably Tenerife, to effect repairs.

Nomad IV was the hot favourite for Line Honours for the RORC Transatlantic Race to win the prestigious IMA Trophy and hopefully the team can effect a repair that will allow them to re-continue. However, the incident occurred over 100 miles out into the Atlantic and the French team will have virtually no chance of catching the front runners, even if a solution to the problem can be found quickly.

Nomad’s misfortune means that, at dawn on day three, the battle for the overall lead is between Jeremy Pilkington's RP78, Lupa of London and Russian Southern Wind 94, Windfall, skippered by Fabrizio Oddone. Windfall was 50 miles north of Lupa of London's position but in terms of distance to the finish, the two yachts are neck and neck. Windfall is positioned to skirt south around a high pressure system, which the Maxi will intend to slingshot around. Meanwhile Lupa of London seem to have taken a more conservative approach, keeping further away from the system and staying further south. The wind is due to veer east in the coming days and go lighter. If the wind does veer this will free off Windfall's angle before Lupa of London.

American Class40 Oakcliff Racing, skippered by Hobie Ponting, has had a great last 24 hours, sailing past Aref Lahham's Yacana in the early hours of this morning and at 0800 UTC was 11 miles ahead. However, Yacana, a classic Swan 68, is still estimated to be leading IRC One.

Currently 4th in IRC One, making 8.7 knots and 3 miles ahead of Sérénade, is the bright yellow Pogo 40, Bingo. One of four French teams in the race, Bingo is owned by husband and wife team from Paris, Isabelle and Yves Haudiquet, and sailed with their long-time friends, Jean François Haupt and Pierre Crepin. Yves Haudiquet, from Yacht Club Paul Vatine, Le Havre, commented before the start: “I'm a lucky man with a 40ft boat able to surf day after day with the alizé (tradewinds) and with a motivated crew. My boat was built to compete in this sort of race and I’m hoping for a long surf ride and to increase the average boat speed from my last crossing.”

Nigel Passmore's British J/133, Apollo 7, is currently leading IRC Two. The Plymouth team had an excellent night, blasting along under Code Zero to open up a 22 mile lead by dawn on Frank Lang's French X-40, Optim'X.