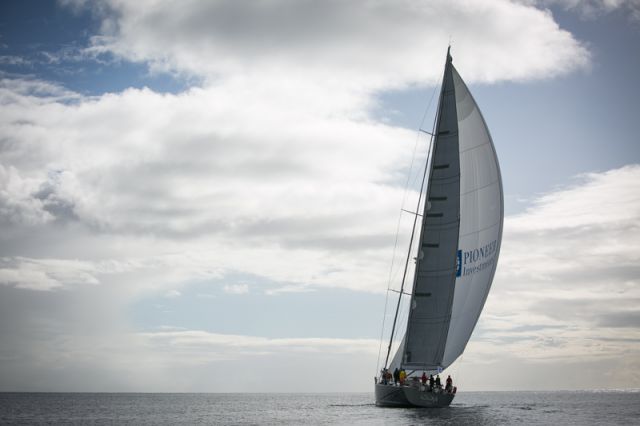 In the early hours of Wednesday 3rd December, Finot Conq 100, Nomad IV, sailed by Jean-Paul Riviere arrived in Las Palmas, Gran Canaria. The assessment of the broken boom is that it cannot be repaired well enough to rejoin the race and, sadly, Nomad IV has officially retired.

500 miles offshore into the Atlantic, the battle is raging for Line Honours. Russian Southern Wind 94, Windfall, skippered by Fabrizio Oddone, is just ahead of Jeremy Pilkington's British RP78, Lupa of London. Since the start on Sunday, both yachts have recorded the same VMG, a mathematical indication of the intensity of the race between the two Maxis vying for the IMA Trophy, and this morning the two yachts gybed less than a mile a part with Windfall just retaining the lead on the water.

Lupa's crew are starting to settle into the routine and Fred Pilkington reported: “The sea state has settled down and we are now cruising along nicely with the kite. The team is being fuelled by Chef, Sofia Winghamre McCarter’s premium grub and there was nearly calamari on the menu following an incident at midnight when an airborne squid struck Captain Dan Stump on the head. Once we overcame our puzzlement as to what it was, we decided to return it to whence it came!”

Aref Lahham's Swan 68, Yacana, is still estimated to be leading IRC One, although big gains have been made during the last 24 hours by Marc Lepesqueux's Class40, Sensation Class 40. The wind has veered to the east and this downwind angle with rolling waves is much more suited to Sensation than Yacana. Class40 Oakcliff Racing, skippered by Hobie Ponting, is also revelling in the downwind surf but two big gybes out to the north didn't look like they paid off.

In IRC Two Nigel Passmore's British J/133, Apollo 7, has taken up a southerly position compared to their rivals Frank Lang's French X 40, Optim'X. Apollo 7 may well have taken up this position to avoid an area of high pressure to the north and it looks to be paying off, as Apollo 7 was 26 miles ahead of Optim'X on the water and also estimated to be leading the class after time correction under IRC.

The RORC Transatlantic fleet have now spent three nights at sea and any vestiges of daily-life on dry land will have vanished. The watch system on board the yachts has become the rhythm of life. Day or night, the sailors will take it in turn to drive, trim and manoeuvre their yachts, putting faith in the others when it is time to rest below.

Swan Yacana has the luxury of a full galley and refrigeration and the mainly Greek crew sent a message from the boat, which gives a flavour of life on board: “The rule is no dry food on this boat. Our breakfast is a choice of jams, toast, honey, yoghurt, fruits, juices, coffee or tea and a variety of cereal. Main meal: A beef ragout (Kokkinisto Mosharaki) with spaghetti or rice (for the more sensitive stomachs), a salad with plenty of fresh scallions and dill, plenty of lemon and of course, Virgin Greek olive oil. Dinner was Linguini Bolognaise and fruits. I know your next question: Are these guys sailing or eating? Bon appétit!” - S/Y Yacana.

Denis Villotte's JNP 12, Sérénade, has just three crew on board. The French team will have two on deck, driving and trimming for 3 hours, while the third crew member sleeps; a real challenge to resilience, stamina and seamanship. Denis Villotte spoke to the RORC media team before departure. “I would like to make a faster crossing than the previous one (16 days 4 hrs) which won't be easy as the distance is a bit longer and winds might be weaker. Crossing the Atlantic with the trade winds is not so easy when you are racing. You may get sudden strong squalls, especially before dawn and you have to be swift and reactive, requiring everyone to be on deck for the manoeuvre. We are a small crew and the automatic pilot won't be allowed, so the race is going to be a real challenge. I hope we'll be able to make a good result in the race. Whatever happens, it's always a great moment to steer a yacht running downwind in the trades with her spinnaker flying.”