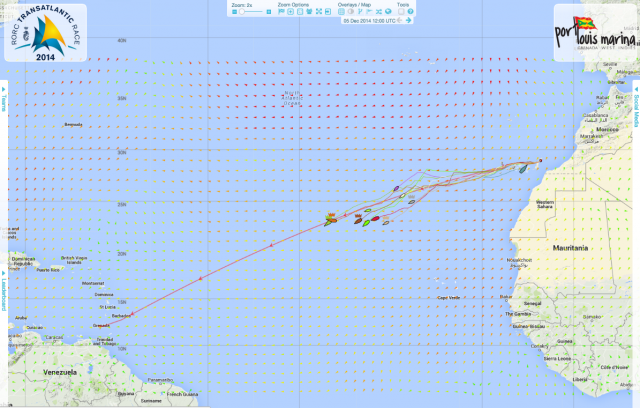 The current weather situation for the RORC Transatlantic fleet is that the unusual northerly winds, which battered the Puerto Calero Marina at the start, have continued, contributing to the north easterly winds currently experienced by the fleet. Caused by the “Azores High” pressure system, this is expected to move gradually south over the next few days. This will be weighing heavily on the competitors minds, as they experience a gradually veering wind. Those yachts situated to the north of the fleet should gain from the new fresh easterly breeze first, but this option increases the number of miles to sail. The rhumb line is the shortest route and the breeze is due to move south. So the decision, which has already been made by the fleet, is either go north to get the breeze first or sail a shorter distance and wait for the wind to arrive.

The Line Honours duel deep into the Atlantic Ocean has continued. Jeremy Pilkington's RP78, Lupa of London, and Russian Southern Wind 94, Windfall, skippered by Fabrizio Oddone are about 20 miles apart, but there is no doubt that the after-guard on both yachts will be glued to the RORC Transatlantic tracker page, monitoring every update. Along the rhumb line to Grenada, Windfall is currently 10 miles ahead of Lupa of London and positioned further north. This lead could easily double if the wind fills in as expected.

American Class40 Oakcliff Racing, skippered by Hobie Ponting, has had a great 24 hours and is now over 80 miles ahead of Marc Lepesqueux's French Class40 Sensation Class 40. However, Oakcliff Racing have been heading south west, whilst Sensation opted to gybe west last night. The degree of separation between the two yachts is not significant and perhaps Sensation will close the gap as the forecast wind develops.

Apollo 7 and Optim'X are now over 200 miles apart and the move south has opened a significant lead for Apollo 7, who are 100 miles closer to Grenada: a huge margin for Optim'X to make up, even if the French yacht gets the stronger breeze first.

Denis Villotte's JNP 12, Sérénade, still has over 2000 miles to go. Denis set a clear goal before the start for the three French crew: a faster crossing than the previous one (16 days 4 hrs). Sérénade is currently estimated to finish the race in an elapsed time of 18d 7h 42m 46s. The fresher downwind conditions will undoubtedly assist in reaching their ultimate goal. Denis sent a blog in French, which can be viewed on the official site. Here is an English translation:

“At the start, the headwinds ripped into us and it was a great relief to start to sail downwind after La Palma and into calmer seas. However, the wind speed built and we achieved a top boat speed of 17 knots but our big yellow spinnaker has been damaged. We have recently experienced light winds, which has slowed our progress but everything is well on board.” – Denis Villotte – Sérénade.

Looking at the weather forecast, by tomorrow all of the fleet should be in a fresh easterly breeze of possibly 20 knots or more, with boat speeds increasing exponentially. This stronger breeze is expected to set in for several days which will also create a substantial following sea state for an exhilarating ride. Long Atlantic waves produce a rollercoaster ride, the helm feels the stern rise as the wave goes under, adjusts the rudder to compensate and then corrects the rudder back as the yacht slides down the wave, with white water hissing and foaming at the rail. Driving a racing yacht in those conditions is heaven itself.