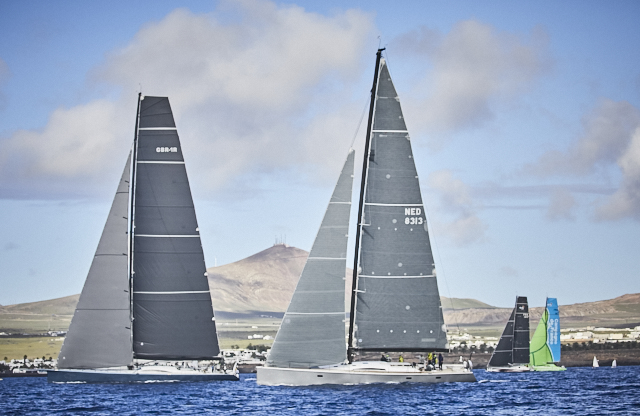 The 3rd edition of the RORC Transatlantic Race started without a hitch in ideal conditions outside Marina Lanzarote. With a gentle breeze and slight sea state, it was a comfortable start to the 2,865 nautical mile ocean race to Camper & Nicholsons Port Louis Marina in Grenada, West Indies. The three fastest yachts have chosen to head north of the rhumb line. Once they have rounded Tenerife, the decision to continue north or dive south will become clear.

RORC CEO, Eddie Warden Owen watched the fleet depart: "It's fantastic to see the fleet taking off on the way to Grenada from Lanzarote. The wind is blowing from the north at about 10 knots and they’re reaching across the starting line. We have got a huge variety of boats; fabulous boats of 100ft and more, like Leopard and Path, to Class40s and of course the amazing multihulls, Maserati and Phaedo that will be having a match race all the way across the Atlantic. I am delighted to say we have an increase in entry every year and we know that this race will grow over a period of time. The quality of the boats and the variety shows that the RORC Transatlantic Race is going to be popular with a lot of racing teams." 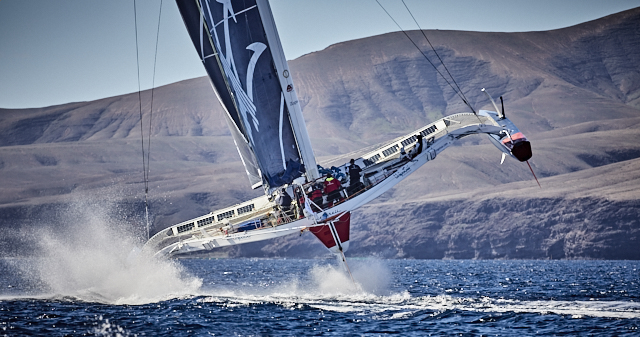 The monohulls were first off, racing for the IMA Line Honours Trophy and the RORC Transatlantic Trophy for the best corrected time under IRC. Giles Redpath's Lombard IRC46, Pata Negra and Swan 82, Stay Calm got away well. However, Mike Slade's powerful Farr 100, Leopard 3 was up to speed very quickly and held a lead of over a mile on Stay Calm by the turning mark at Puerto Calero.

Once Leopard cleared the gap between Lanzarote and Fuerteventura, the powerful Maxi turned at right angles to the course and headed north for over two hours. If they continue on this northerly route, the crew will be in full foul weather gear hiking out on the rail and ready to hanker down for a rough ride to come. Leopard's tactics may be to hook into a low pressure system predicted to develop further up the track. Making the low pressure system at the right time will be a huge factor for Leopard. If the connection is right, Slade's team will slingshot south. If they are too late, brutal headwinds and a significant adverse sea state may result. Some weather models are also showing the chance of a secondary low, which would magnify the conditions exponentially.

The MOD 70 duel between Lloyd Thornburg's American Phaedo3, lining up against Giovanni Soldini's Italian Maserati looks like developing into a tough and brutal race. The two multihulls crossed the line in unison, with Phaedo taking the windward side. Maserati tacked away and continued for some distance, looking to get into better pressure. However, it didn't materialise and Phaedo3 made the Puerto Calero mark well in front. Phaedo3 had won the start, but there is a long way to go in the battle of the MOD70s. Three hours into the race, Phaedo3 had opened up a two-mile lead on Maserati. Both looked to be heading north of the rhumb line; time will tell whether this is the chosen route. The two MODs should be able to push through a light patch of ocean predicted to open up in front of them and make fresh pressure in the next few days. If they turn north, the conditions could get very tasty indeed, as there is little escape for the crew on a MOD70 in wind and waves.

Halvard Mabire & Miranda Merron's Campagne de France leads the Class40s but only just; Catherine Pourre's Eärendil is just behind. It is very early to look at the overall leader under IRC, however, Swan 82 Stay Calm has been very impressive in the early part of the race. 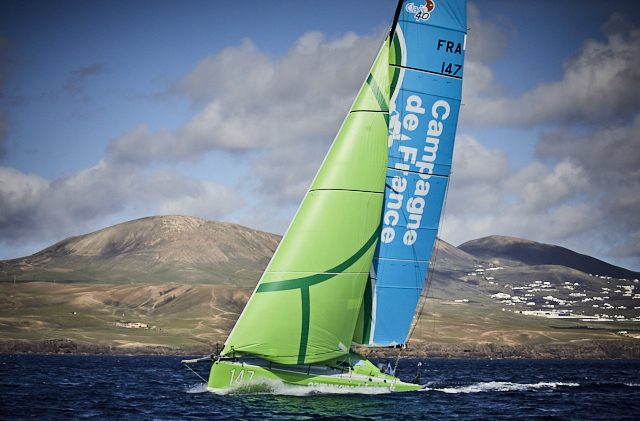