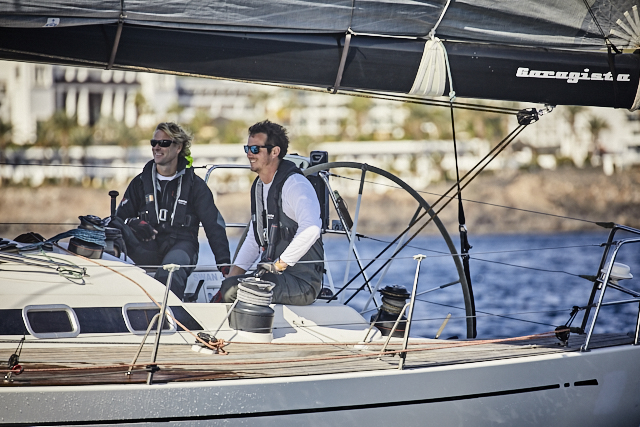 Mike Slade’s Maxi, Leopard 3 continues to match the pace of Giovanni Soldini’s MOD70, Maserati while they continue heading upwind working their way into the faster conditions in the pressure system ahead. Aragon, Arco Van Nieuwland and Andries Verde's Dutch Marten 72 maintains the lead under IRC and is revelling in the early conditions in the race; staying in front of the significantly bigger Baltic 112, Path and Swan 82, Stay Calm, while Infiniti 46, Maverick at half the size continues to make great progress towards the front of the fleet.

In IRC One the Two Handed Swan 45, Nemesis, of James Heald and Ben Harris are in a fabulous position; the conditions early in the race suiting the pair perfectly and they are still snapping at the heels of Nova Scotia-based Challenger, the fully crewed Volvo 60 of Spartan Ocean Racing. James and Ben will be settling into the watch system which sees them rotating 2 hours on and 2 hours off through the night, but James explained before the start of the race that most of the day both he and Ben tend to be up tweaking the boat keeping it going as fast as possible as well as keeping up with the maintenance and checks: “We sailed the boat from the Solent to Lanzarote non-stop in preparation for the race; a great way to get to know the boat and each other. The watch system worked and we complemented each other very well,” explained James. “I like to steer on my watch, where Ben will use the autohelm more and be free to trim, but it is all hands on deck for any manoeuvres or sail changes.” 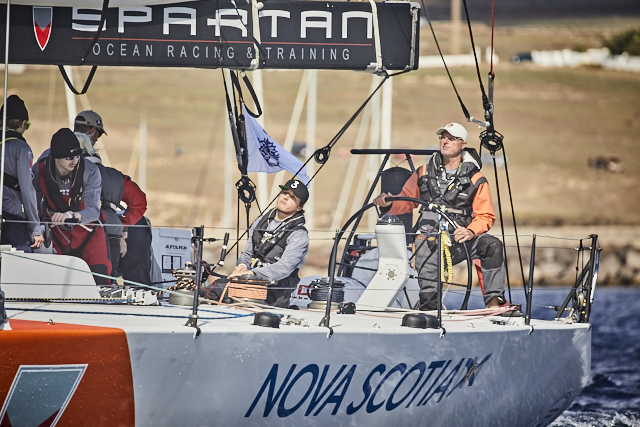 Spartan Ocean Racing’s Challenger is enjoying the race as the crew get used to the boat and life on board: “Our first few days at sea have been an extension of the training we began in Lanzarote; getting to know the boat, getting used to the watch system, preparing food, watch keeping, helming and trimming. Already we have shared much knowledge on sailing these bigger boats. We have been on headsails going upwind, on the Code Zero cutting across dead zones and are now on reaching sails working in very light winds to keep with our 'pace boat' on this outward leg- Maverick (DSS Infiniti 46) currently 50 miles ahead of us,” Chris Stanmore-Major updates us from on board.

Halvard Mabire and Miranda Merron continue to lead the Class40s pulling out a 90 mile lead over Catherine Pourre and the team aboard Earendil.

“Campagne de France is ghosting along in winds of 1 to 5 knots, occasionally gusting 7 knots, wind direction shifting around by 60 degrees. It is a dark moonless night and not a soul in sight. It's quite peaceful, dry and not cold. Path (Baltic 112) occasionally appears on AIS some 17 miles north of us. I'm not sure what life is like on board for them, but I'm fairly certain they didn't dine on freeze-dried food straight out of the packaging, and there are probably several people on watch. After the rather busy start to the race with multiple sail changes and manoeuvres to get through and away from the Canaries and various evil clouds, we are now catching up on food and sleep. At this speed, it's going to be a long race!” explains Miranda in her latest blog from the boat. 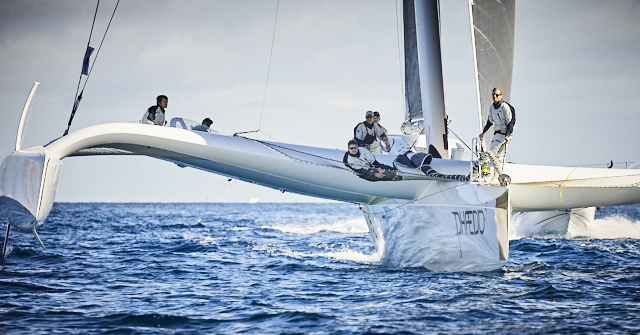 Team Phaedo are currently 300nm north of rhumb line; this time last year they were 500nm south of the rhumb line doing 30knots down wind in shorts and t-shirts; a very different experience this time as they search for good following breeze in the north Atlantic! The initial low road they took after the Canary Islands has paid handsomely and they lead Maserati by over 300nm and are averaging twice the boat speed of the Italian MOD70. The race is by no means over as there are a lot transitions around the pressure systems to negotiate as well as a tricky approach to the Caribbean Islands and Grenada before any champagne can be opened.

“We have worked our way around the high pressure west of the Canary Islands and now are trying to transition the cold front where we expect Maserati to catch back up and possibly see a restart; we will have to wait and see,” Brian Thompson, skipper of Phaedo explains from the boat. “We have settled into the watch system and celebrated Paul Allen’s birthday for the last 36 hours; midnight Canary Islands time until midnight Californian time!” Brian continues.

Follow life on board through the Boat Blogs - http://rorctransatlantic.rorc.org/news/2016-blogs/