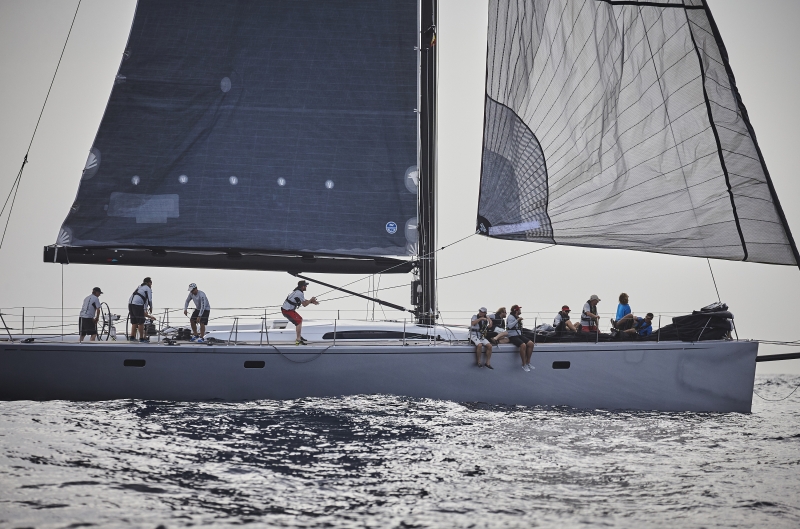 CQS has been hitting over 20 knots of boat speed, surfing down Atlantic rollers, but it has not all been plane sailing as their blog shows. “The A2 spinnaker had been up for four days during the RORC Transatlantic Race when a two foot tear appeared during a gybe. A4 hoisted, A2 doused, repaired, repacked and hoisted. Total time 90 minutes. All 15 crew working flat out. Now that’s what I call teamwork!”

Teasing Machine is 1475 nautical miles from the finish and is the provisional overall leader. Since Varuna's retirement, the French team has been leading on corrected time but Aragon in particular has been closing the gap. In the last 24 hours Aragon, the holder of the RORC Transatlantic Race Trophy, has shown better speed than Teasing Machine. Sorceress has also picked up the pace, taking a similar line to fellow Maxi Aragon, whilst further south, Outsider is following Teasing Machine's line.

“Day 7 at Sea and Outsider is going again.” commented the team via satellite link.” We made it through the transition. Yesterday we had a few tough moments caught in no wind. It is like being on any average train station in Germany - if you miss your connection it can be damn boring! And after a while you will take any train that takes you out of there!! Right now we find ourselves finally benefiting from a good breeze, the big kite is up and conditions are just right for the good ship while we are making up the miles, and a big ocean swell is rolling underneath us. As did probably everyone else we had a few incoming flying fish attacking us - the boom has already some marks... poor fish. But the Sun is out and life is good! Regards, your Outsiders!”

Johann von Eicken's German Swan 56 Latona, skippered by Pit Brockhausen is the new provisional leader for IRC One. Latona has continued to race north of the rhumb line, and is about to experience the second low pressure system of the tough northerly route.  Richard Palmer's JPK 10.10 Jangada is the provisional leader of IRC Two and IRC Two Handed, ahead of Bermudian Cutter Gemervescence owned by RORC Commodore Steven Anderson and co-skippered by Jane Anderson. Berry Aarts' Jeanneau 54 No Doubt racing with Petra van Driel two handed, have not sailed the proper course and will be subject to a penalty. No Doubt is passing the Cape Verde Islands, the last vestige of land they will see for well over 2000 nautical miles.

In the Class40 Division, Berthold & Tobias Brinkmann's MarieJo continues to lead Mathias Mueller von Blumencron's Red. The two German teams have finally got into the trade winds, have set downwind sails and are surfing at speed towards Grenada. The Class40 dogfight continues, as MarieJo's lead has been reduced to 20 miles, with Red reeling MarieJo in by about a mile every two hours. Gerald Bibot, racing his Belgian 42ft Catamaran Zed 6, could not contain his excitement as they pick up speed in the fantastic conditions. “Finally in the trade winds after one week. Such a great feeling. Hi from Gérald, Olivier , Michel & Pierre.”