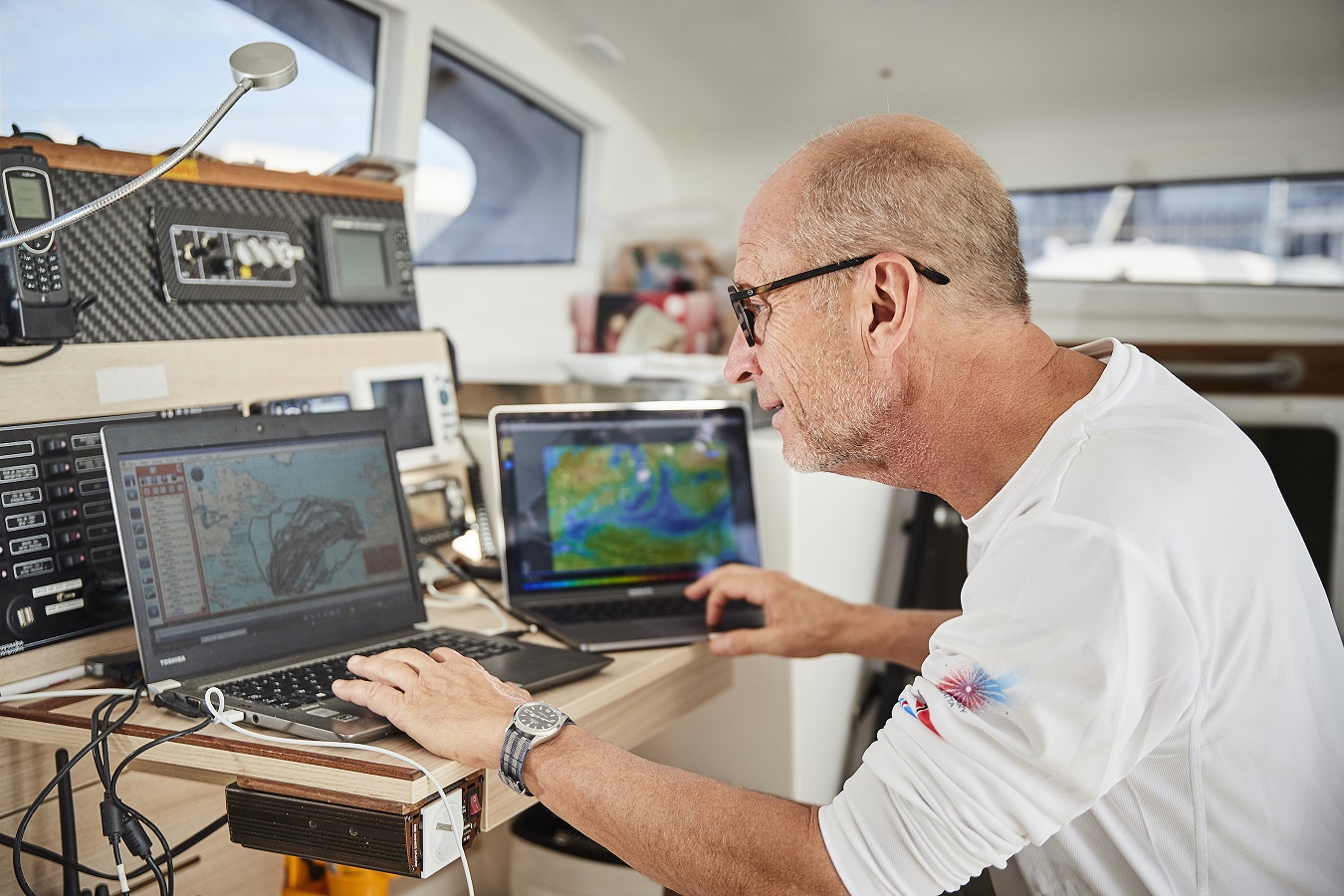 Gerald Bibot analysing the weather scenario for the 2017 RORC Transatlantic Race. He is competing for the second time in his catamaran Zed 6 © RORC/James Mitchell

Gerald Bibot will be competing in the 2017 RORC Transatlantic Race with his Belgian 42ft Catamaran Zed 6. Gerald is the founder of Great Circle which produces weather routing programme Squid. In 2015 Gerald was the winner of the MOCRA Class, completing the race in just over 11 days and the only team to take a northerly route.

“This is going to be a tricky race compared to two years ago and the options are not balanced between north and south,” commented Bibot. “In 50 scenarios only two routes are going south of the Great Circle Route and 42 are going north, so the probability of a northern route is almost absolute for just about any boat in the race, except possibly a boat that has good performance upwind in light air.” 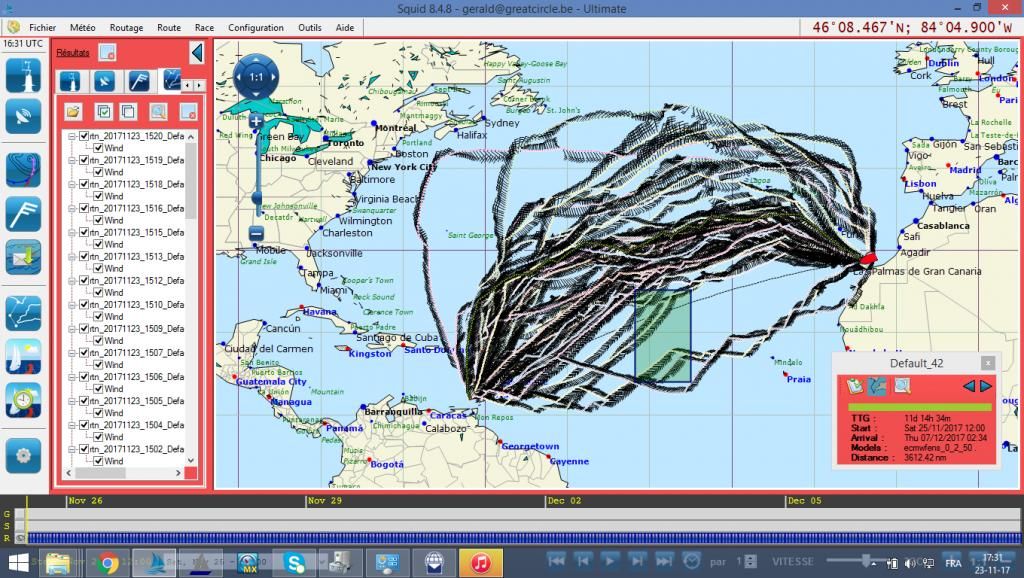 The RORC Transatlantic Race fleet must leave Lanzarote to starboard and Fuerteventura, Gran Canaria and Tenerife to port before they can head into the open waters of the Atlantic Ocean. A low pressure system located to the north west of the islands is expected to produce fast downwind conditions in the early part of the race.

“The fleet will be virtually downwind for the start heading north,” explained Bibot. “With the wind from the south there will be a big wind shadow to the north of the islands. The other effect will be that the ocean current will be against the wind, so we can expect waves of maybe three metres. Competitors must be careful not to go too close to the centre of the low because there will be no wind. The boats might literally sail away from Grenada and slingshot around the low to stay downwind. After that, several transition zones are predicted. This is definitely going to be a very tactical race.”

Jens Kellinghusen's German Ker 56 Varuna is one of the fastest yachts in the race. Mike Broughton will be navigator, taking part in his 20th transatlantic. Broughton would not commit to Varuna's route:

“I would say that there is a 75% chance that we will go north and it could be a rough three days if we do,” said Broughton. “The low pressure system will create conditions more akin to the North Atlantic. We could be headed as we approach the low, as well as rain and squalls to contend with. The wind speed and direction could be very unstable. In the early part of the race we could see anything from 14-30 knots and upwind on Varuna that will be a wet ride, which was definitely not in the brochure.” 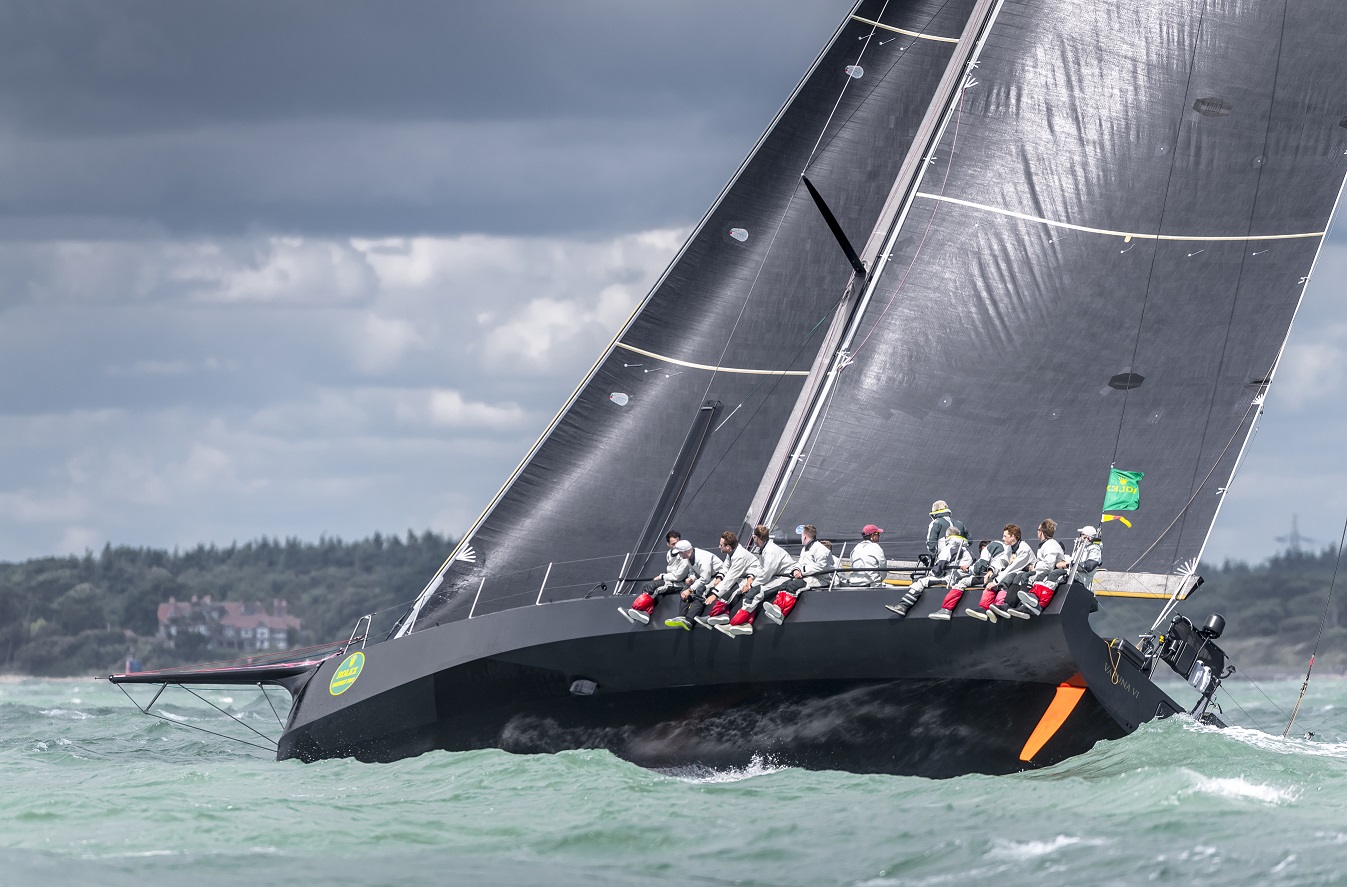 Website: http://rorctransatlantic.rorc.org/
Daily stories, press releases and race updates as well as blogs from the boats and a photo gallery

Fleet Tracking: http://rorctransatlantic.rorc.org/tracking/2017-fleet-tracking.html
Individual yachts, classes or the whole fleet can be tracked throughout the race

Instagram: @rorcracing
A selection of the best photographs to bring the race alive