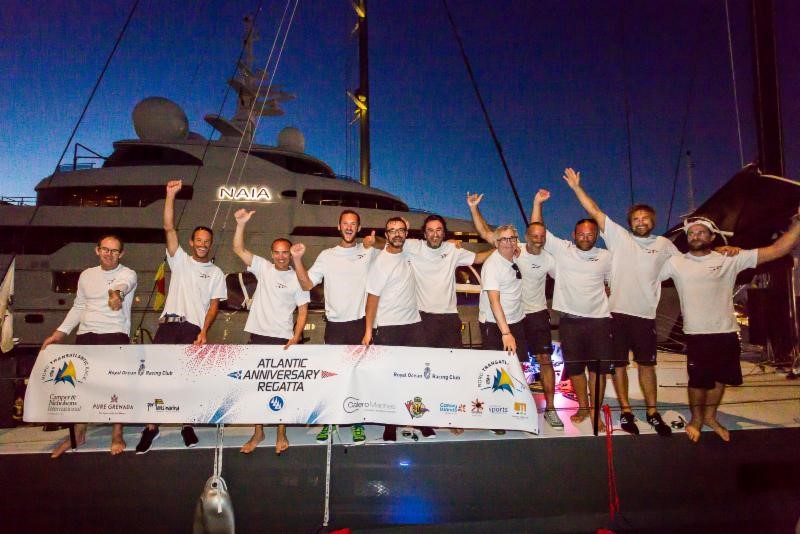 Teasing Machine arrived at sunset on the 14th day of the race and has one hand on the RORC Transatlantic Race Trophy. The team cheered for joy as they crossed the finish line.

“We are very happy to be here in Grenada,” smiled Eric de Turckheim. “This is my first transatlantic race and it has been fantastic. Every time I finish any race, be it a running marathon or a yacht race, you feel emotional, but also relaxed. Your mind, body and soul is released from that concentration. For me a memorable moment was passing through the transition zone after the start. We had been upwind for a long time and we had a short passage of very light winds before we got into the tradewinds. One night it was so beautiful, flying the Code Zero, doing just four knots. There was no noise, nothing and the moon almost full. It was just magnificent!”

The stunning Canadian Southern Wind 96 Sorceress, skippered by Daniel Stump with a crew of just nine, finished the race 35 minutes ahead of Tilmar Hansen's German Elliott 52 Outsider. Eleven German teams are taking part in this year's race, the first part of the Atlantic Anniversary Regatta, celebrating the 150th anniversary of the NRV (Norddeutsche Regatta Verein). NRV member Tilmar Hansen was delighted to be the first all-German team to finish the 2017 RORC Transatlantic Race.

“We are thrilled to be here! It is great to be the first German team!” commented an elated Tilmar Hansen. “It is amazing and we can't have enough of that, but we would have liked to have beaten the  boats in front of us as well. We were trying hard, but it is very nice to be the first from Germany to finish this race.”

At 1000 UTC on the 9th September, 17 yachts are still racing and provisional class leaders are as follows.

IRC One, Bjorn Woge's German Andrews 56 Broader View Hamburg is 625 miles from the finish and leading after time correction in a highly competitive class. Broader View Hamburg is the most southerly of the class, defending a narrow lead from Friedrich Boehnert's German Xp50 Lunatix, and Kai Weeks' French Class40 Sensation, racing under IRC. Johann von Eicken's German Swan 56 Latona is far to the north and challenging the class leaders. On estimated corrected time, just four hours separate the trio.

In IRC Two, Richard Palmer's British JPK 10.10 Jangada, racing Two Handed with Rupert Holmes, leads on the water, and the class. The battling German Class 40s are less than 500 miles from the finish. Mathias Mueller von Blumencron's Red has opened up a 45 mile lead. Berthold and Tobias Brinkmann's MarieJo has reported a steering problem, but continues towards Grenada in the wake of their close competition. Gerald Bibot's Belgian Catamaran Zed 6 is 280 miles from the finish.