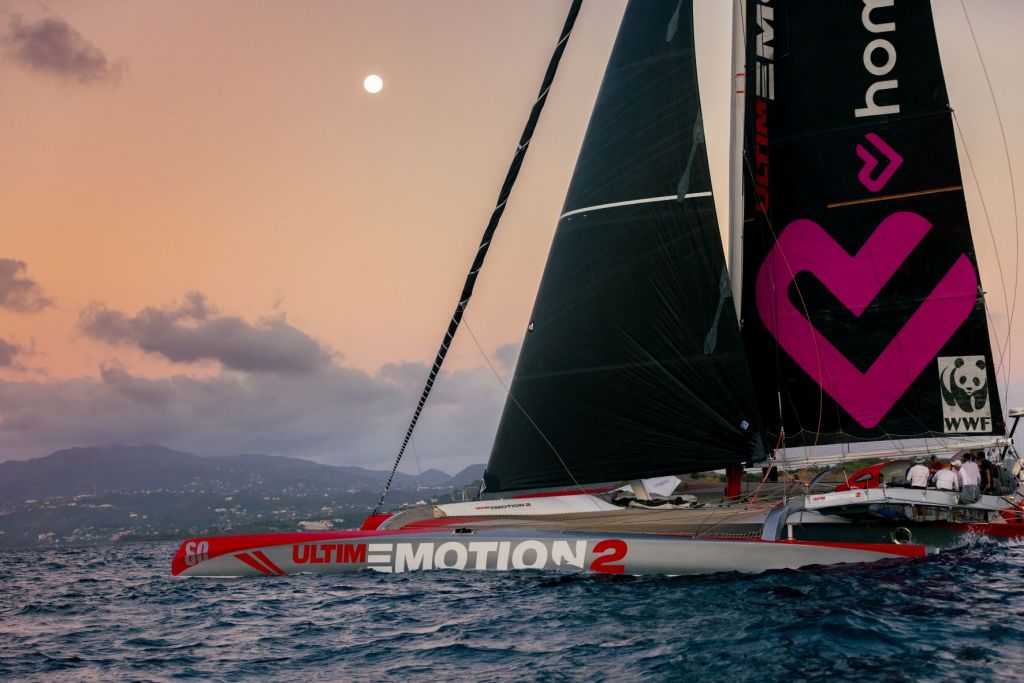 On the tenth day of the RORC Transatlantic Race, 21 teams are still racing in the Atlantic for the overall win and claim the RORC Transatlantic Race Trophy. Racing under the IRC Rating Rule, Comanche’s record run has now set the bar for the monohulls to beat. Out in the Atlantic, battles for class honours and private duels are raging, and the race for the overall win is far from over.

In the MOCRA class, the latest multihull to finish is Antoine Rabaste’s Maxi Multihull Ultim Emotion 2 (FRA), which crossed the finish line outside Camper & Nicholsons Port Louis Marina in Grenada just before sunset on 16 January. The 80ft trimaran screamed into Grenada at a speed of over 26 knots!

The Volvo 70 L4 Trifork (DEN), with Joern Larsen at the helm, is 171nm from the finish and expected in Grenada at approximately 23:00 UTC. L4 Trifork is estimated to be 15 hours behind Comanche’s time corrected under IRC. Volvo 70 I Love Poland (POL), skippered by Grzegorz Baranowski, is currently third in class and expected to finish the race on Tuesday 18 January.

L4 Trifork has reported a reduction in wind speed to the RORC Media Team: “We exited the light wind area in the high-pressure ridge, costing us a fair few miles on the ranking. Not a lot we can do about it, we have to sail the weather we are given. Very comfortable sailing conditions and temperature, but of course we hope for a bit of water over the deck again.” 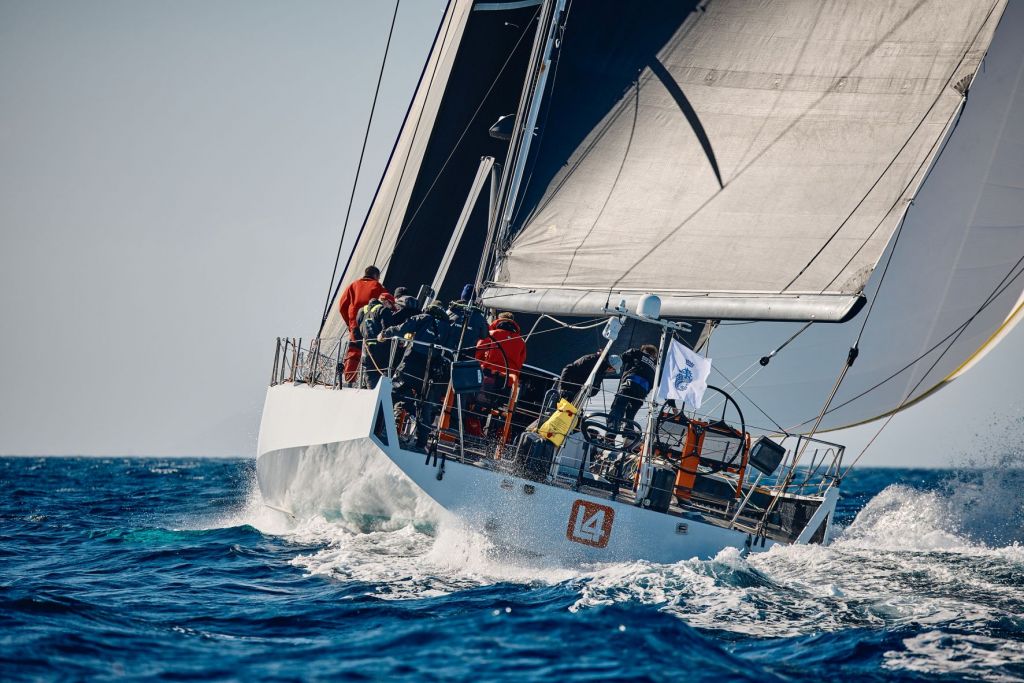 Below: David Collins' Botin 52 is having a closely fought battle with Max Klink's Botin 52 Caro in IRC Zero © RORC/James Mitchell 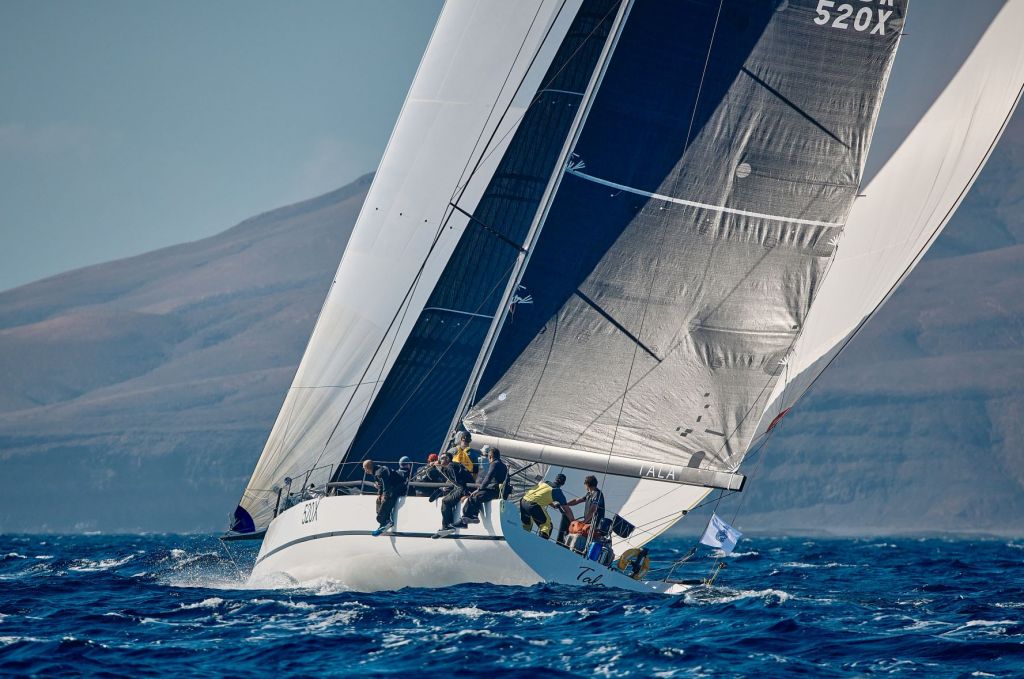 A photo-finish is on the cards for two high-performance 50-footers that are battling for class honours, 750 miles from the finish. While David Collins’ Botin IRC 52 Tala (GBR) is ranked first in class, Max Klink’s Botin 52 Caro (CH) is leading on the water by just five miles. Both teams are expected to finish the race at around midday UTC on 20 January. Dominique Tian’s Ker 46 Tonnerre de Glen (FRA) is just over 1000 miles from the finish, and sitting third in class.

There is also good news from the dismasted Botin 56 Black Pearl, which has made landfall at El Hierro in the Canary Islands after Stefan Jentzsch and his team motor-sailed 800nm to safety. More news when they arrive in Marina Puerto Calero, Lanzarote.

Ross Applebey’s Oyster 48 Scarlet Oyster (GBR) is the provisional leader after time correction, with Richard Palmer’s JPK 10.10 Jangada (GBR), racing two-handed with Jeremy Waitt, in second. Ranked third is the wily Jacques Pelletier at the helm of his Milon 41 L’Ange de Milon (FRA). Andrew Hall’s Lombard 46 Pata Negra (GBR) leads on the water and is currently fourth in class. IRC One is proving to be the most competitive class in the race, with all four of the above vying for victory. The leading boats have now negotiated an area of lighter wind and are expected to get into full trade wind velocity shortly, promising a flourishing finish into Grenada on the 24 January. 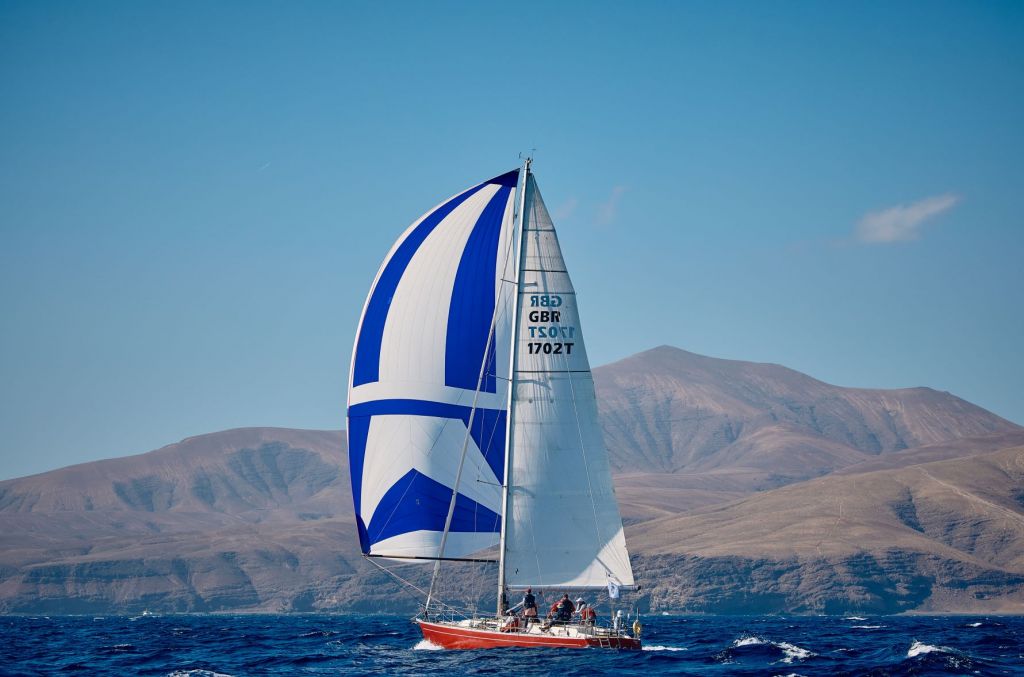 Ross Applebey contacted the RORC Media Team to set the scene on board Scarlet Oyster:

“It’s taken a week to get into some downwind sailing; we’re not out of warm gear at night, but the days are glorious. We are starting to fantasise about what we will find on arrival: showers, fruit, fresh water and maybe some rum! My hair resembles the fleece of a moorland sheep, but I have declined the offer of the onboard hair trimmers. Wildlife seen so far: tropic birds, flying fish, porpoises, dolphins and, at dawn this morning, a juvenile whale - pilot we think, full-on breaching and having fun.”

Richard Palmer checked in by email from Jangada:

“As many of you would have seen we have been having an intense battle with two boats, in particular Scarlet Oyster and L'Ange de Milon. Scarlet Oyster is very well sailed, it's really tough racing a boat with such a long waterline length and such a low rating, but in fairness to Ross they are sailing with a serious intensity that we are needing to match. They are fully crewed and having met a few of them prior to the start they are very motivated to win! They will be tough to match in the final stages of the race.

“Secondly, L'Ange de Milon is part of an elite French sailing fraternity, and the boat is a prototype of the formidable 'Sunrise' a JPK 11.80. Our mission is to keep the intensity in our sailing. If we really hit our targets, we appear to match and sometimes win the three-hourly race update. However, this wasn't helped when we had to lower our mainsail just before nightfall for what was on first sighting, a race-ending breakage. The gooseneck pin had pulled itself up and out, thankfully a mainsail track car had prevented it pulling all the way and coming apart. It took about an hour to fix using a strop on a winch to pin down. The nut has been

commandeered by Neptune and we can't seem to find a chandlery to replace it.” 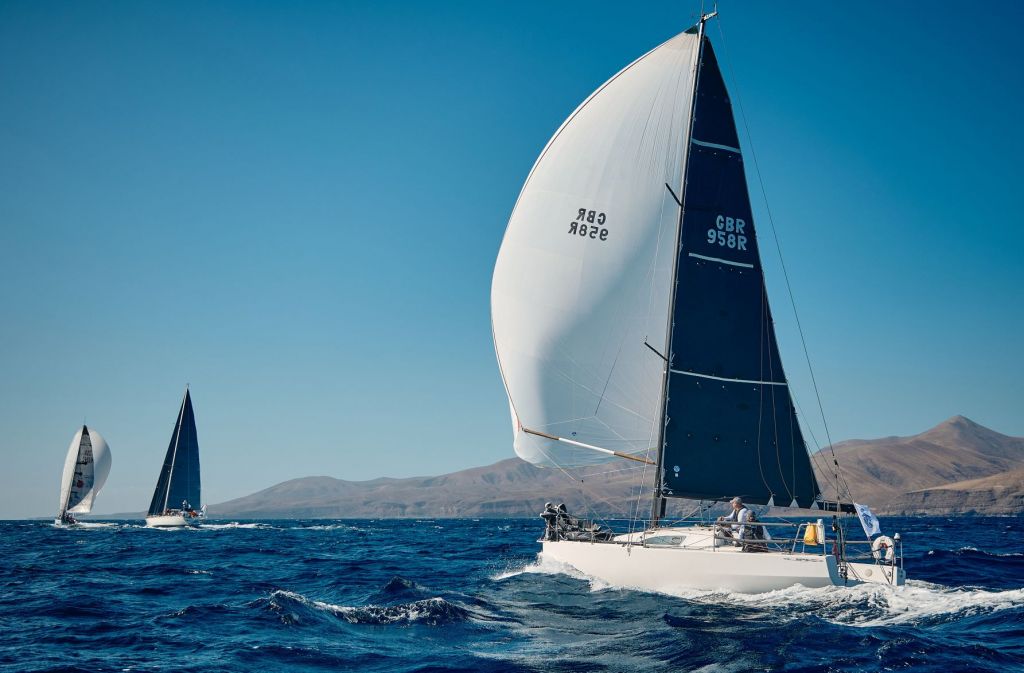 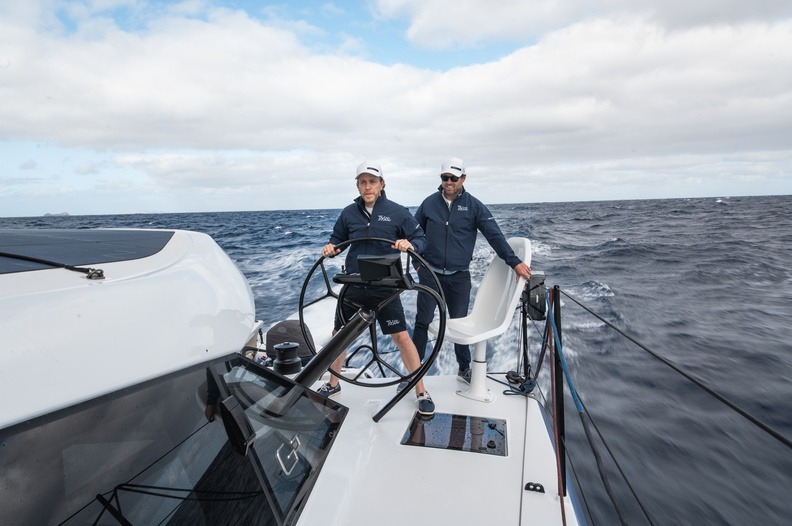 “Wind fairly unstable, two sail changes in quick succession - good training! Warm and sometimes sunny, quite a few squallmonsters around. A privilege to be racing in warm climes in January!”

Gunboat 68 Tosca (USA), co-skippered by Ken Howery and Alex Thomson, is back in the race, having made a pit-stop in the Azores.

“Ken, myself and the crew have had a busy one getting Tosca ready to finally make our way to Grenada,” confirmed Alex Thomson. “The repairs have now been made and we are all really looking forward to getting back out there! Thanks to everyone in the Azores who has helped us over the past five days.”

Above right: After stopping in the Azores to fix a few issues, Ken Howery's Gunboat 68, Tosca is back en route to Grenada © Tosca/PKC Media; Below: Halvard Mabire and Miranda Merron are sailing doublehanded on the ORC50, GDD © RORC/James Mitchell 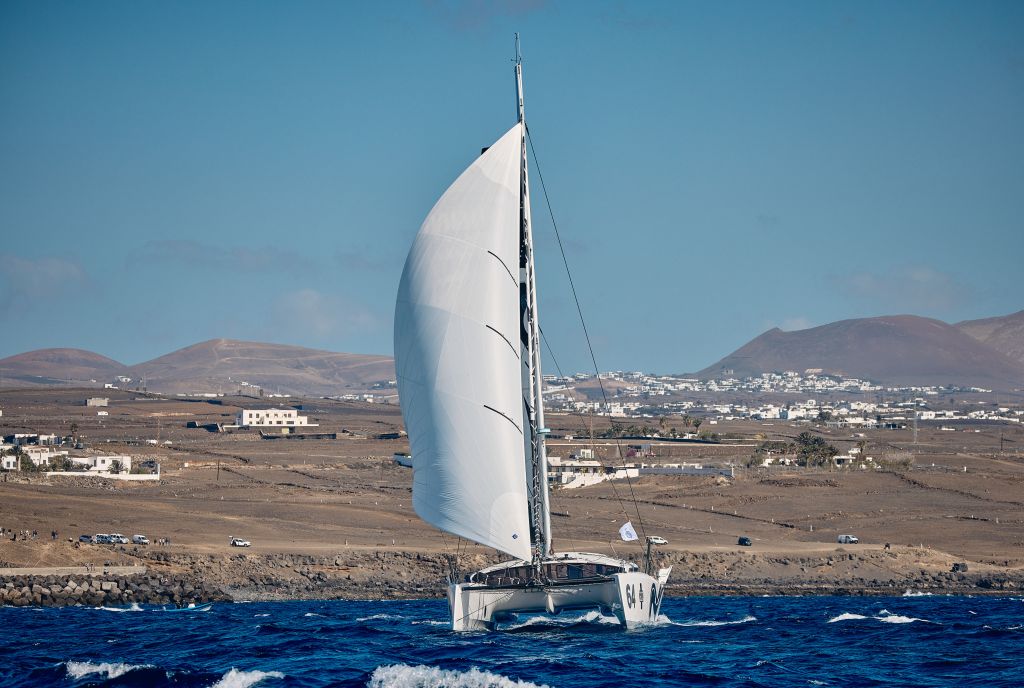