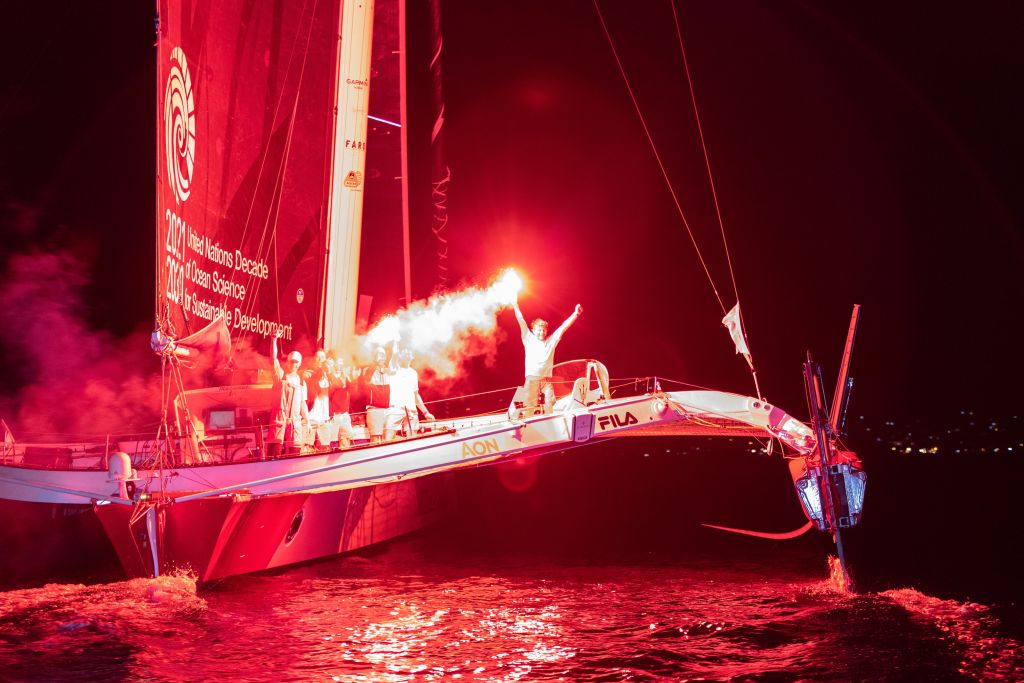 Maserati’s margin of victory was less than 20 miles over PowerPlay and Argo, expressed as a fraction, that is one third of a percentage point. Giovanni Soldini has enjoyed many great successes in his glittering career, and this was one of the finest.

The camaraderie and sportsmanship between the three boats was exemplified by Soldini’s Maserati crew waiting for PowerPlay to finish, cheering them through the line. As well as Argo’s shore team fixing up a dockside barbeque at 4am, all washed down with ice cold beers provided by Port Louis Marina!

“That was really fantastic,” commented Soldini. “To do a transatlantic race like that with three boats 20 miles from each other is just amazing. We had a big problem the first night as straight away we broke the port rudder (hitting a UFO). However, in the second part of the race, luckily the angle was such that the starboard rudder was in the water.” 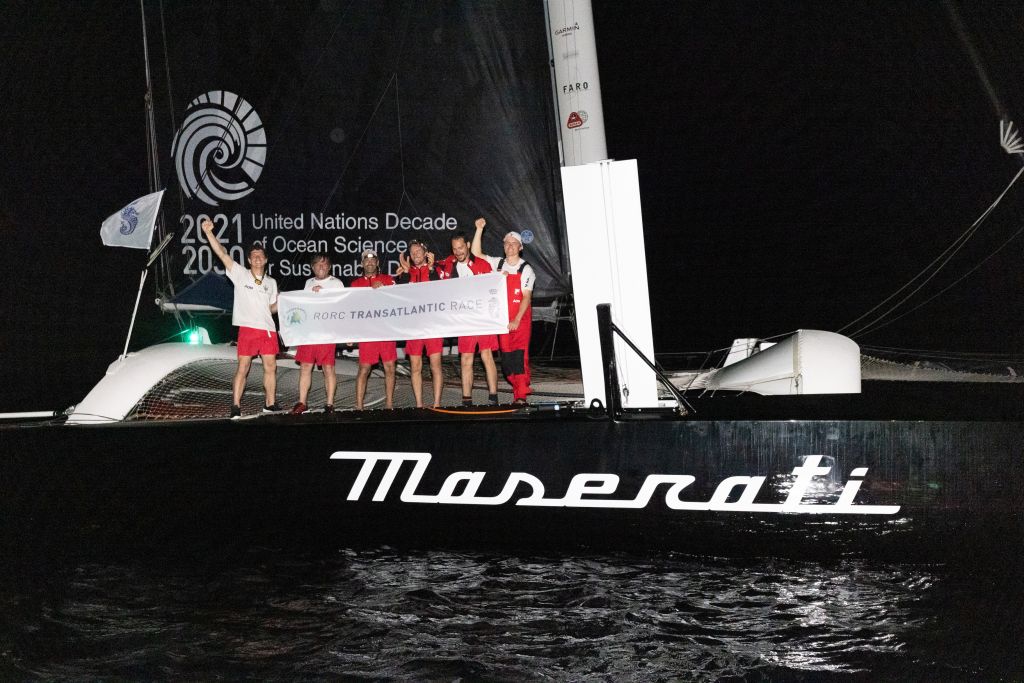 Above: Celebrations on board Giovanni Soldini's Italian Multi70 Maserati after crossing the finish line in Grenada first after eight days of extraordinary racing in the RORC Transatlantic Race © Arthur Daniel/RORC

Below: Victory for Giovanni Soldini's Multi70 Maserati after completing the 2022 RORC Transatlantic Race off Camper & Nicholsons Port Louis Marina in Grenada in the early hours of Saturday 15 January © Arthur Daniel/RORC 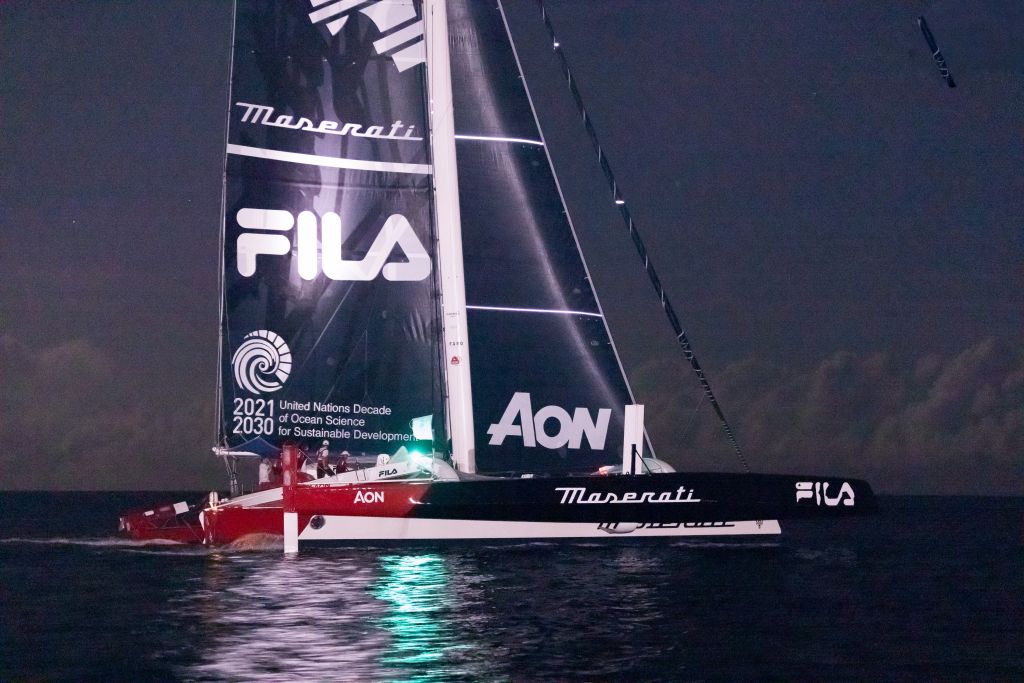 Maserati’s killer blow came from a decision to round Barbados to the north, some 150 miles from the finish, as Soldini explains:

“We decided to sail to the northwest and for sure it was a good idea. We crossed behind everybody (PowerPlay and Argo), but stayed in good wind which shifted right, allowing us to stay at maximum speed and come down to the rhumb line. This was an important win for us. We have had some technical problems in recent races and although we have set some records, winning a proper race like the RORC Transatlantic Race has been so enjoyable for us. We are very happy because I think the boat is getting better and better with little adjustments. I think this year we made big steps and we have found out that the boat is very fast.” 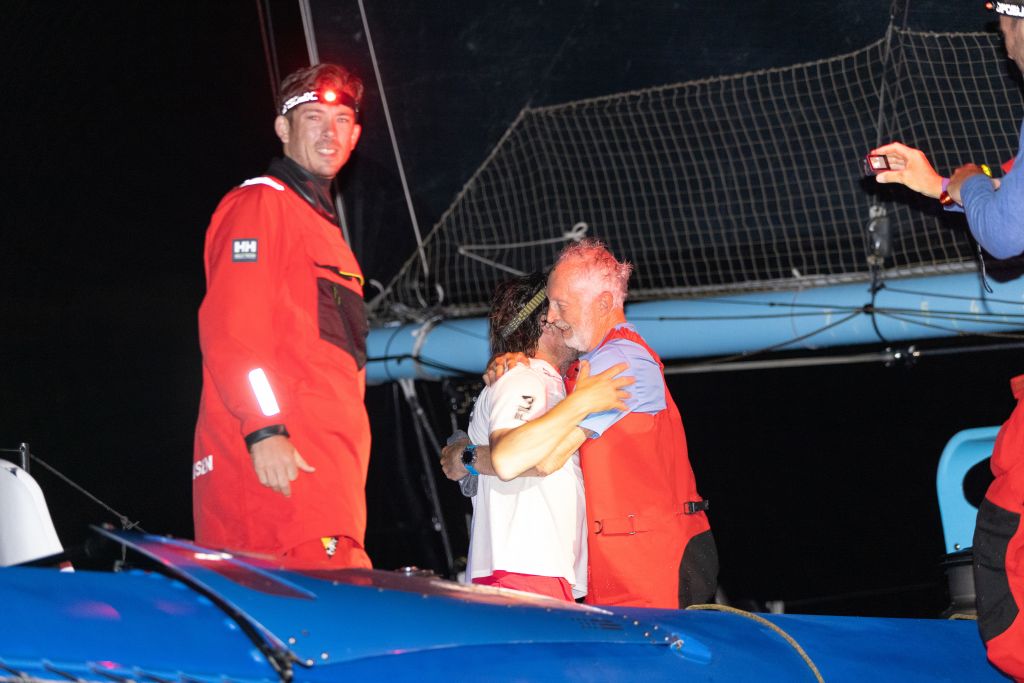 Less than an hour after Soldini’s Maserati had crossed the line, Peter Cunningham’s MOD70 PowerPlay (CAY) also finished the 2022 RORC Transatlantic Race. PowerPlay had led for most of the race, but even after losing by a small margin, right at the end, Peter Cunningham was upbeat about the experience, as he explained:

“It was the most perfect race in the sense of the last few days, even though the weather wasn’t in our favour at that time and was in Maserati’s absolute sweet spot,” commented Cunningham. “Moonlit nights with breeze and flat water, screaming along at sometimes 30 knots, it was an incredible experience, just magic. It wasn’t tough at all (to come second); Maserati with their foils could do things that we couldn’t do, and they made great decisions. At the beginning of the race, when it was rough, PowerPlay was doing things Maserati couldn’t do. I am very proud of the PowerPlay team; our manoeuvres and decisions were fantastic. We ticked all the boxes, but the conditions just didn’t favour us.” 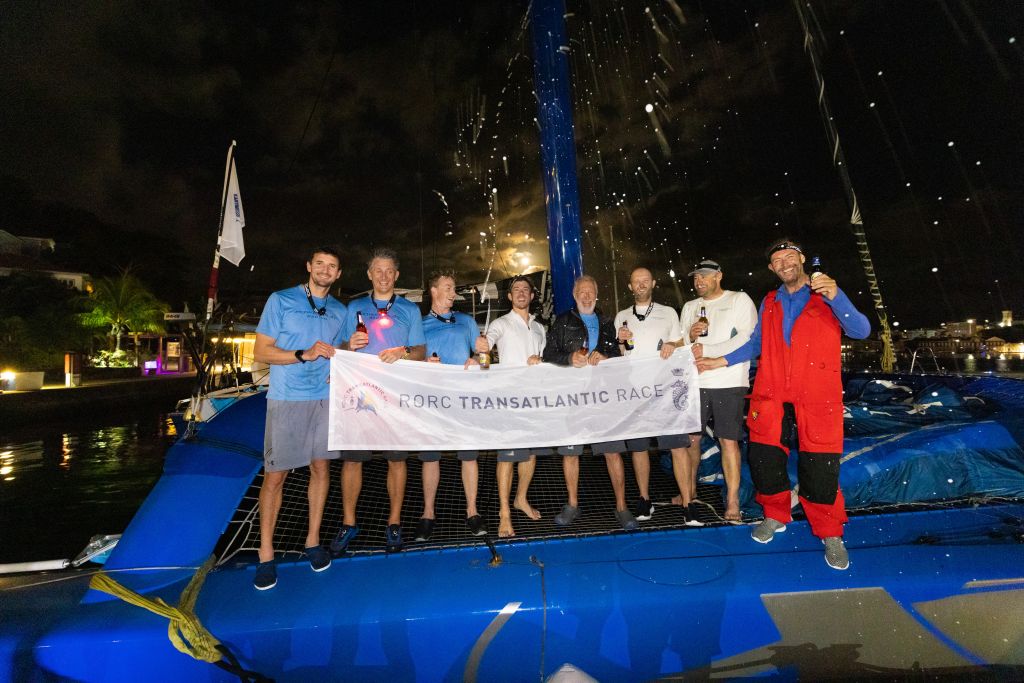 Below: PowerPlay heads to the dock at Port Louis Marina after crossing the finish line in Grenada © Arthur Daniel/RORC 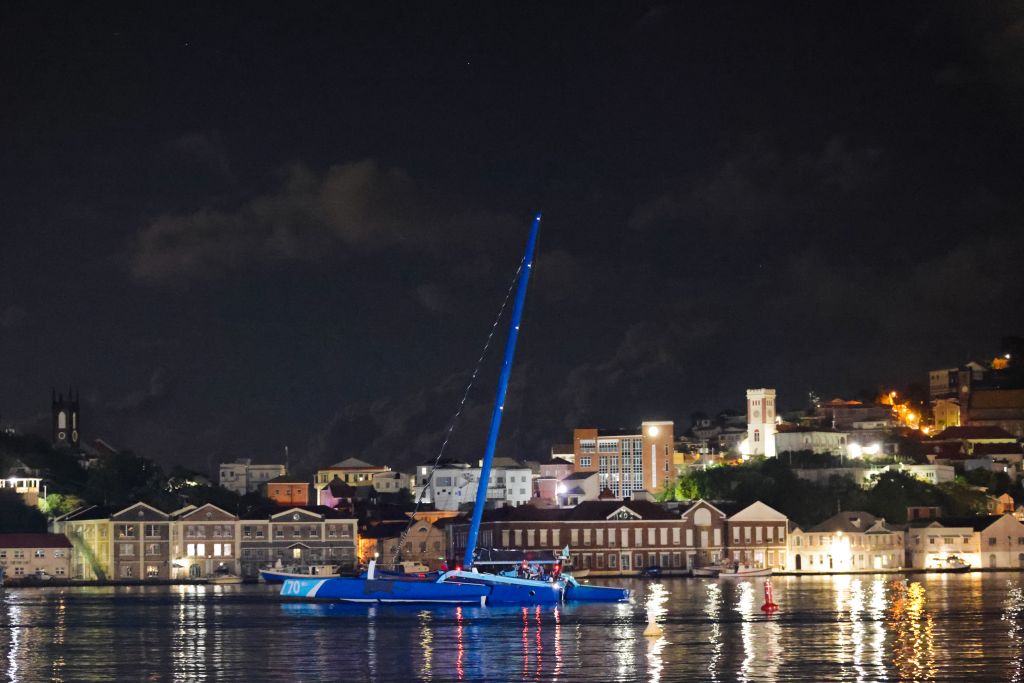 Jason Carroll’s Argo completed the multihull line honours podium. Argo had lost part of their port rudder on the second night of the race: 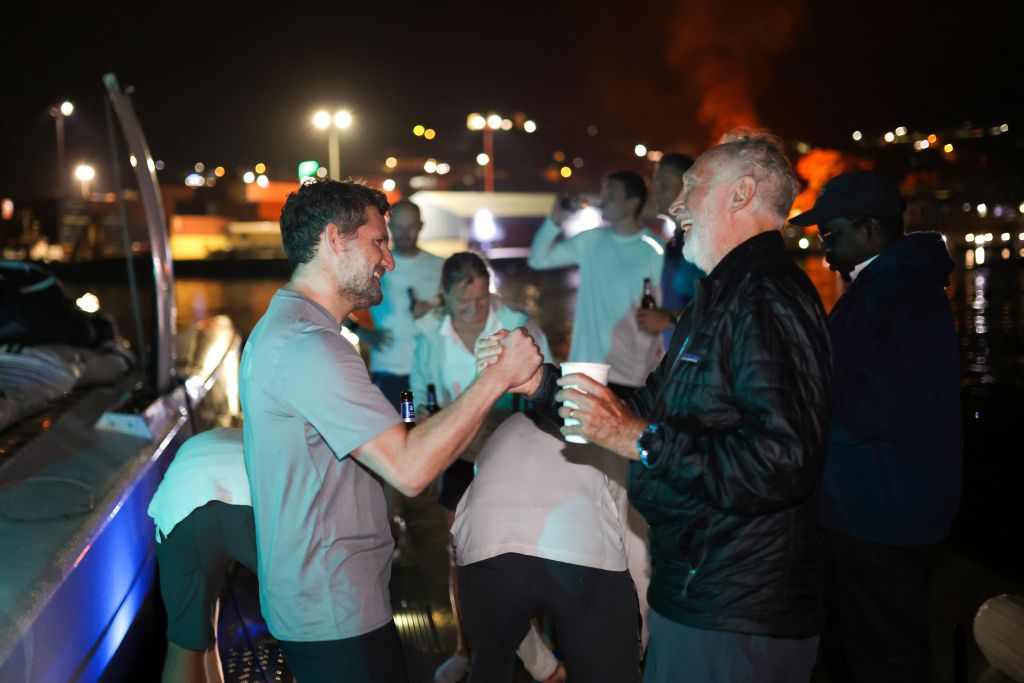 “It was incredible that we were all together for an amazing finish,” commented Carroll. “It was phenomenal. At times we were 100 miles apart and at other times we were crossing each other in the middle of the ocean. It was close, outstanding racing. I got into this class because I wanted a different experience from sailing and it is awesome, really cool. I would have loved to give my congratulations to Giovanni, but unfortunately due to Covid that wasn’t possible. I really appreciate the Royal Ocean Racing Club and organisers of this race giving us the opportunity for these three boats to race against each other. I will have to congratulate Giovanni and his team when we all meet again in Antigua at the RORC Caribbean 600 in February.” 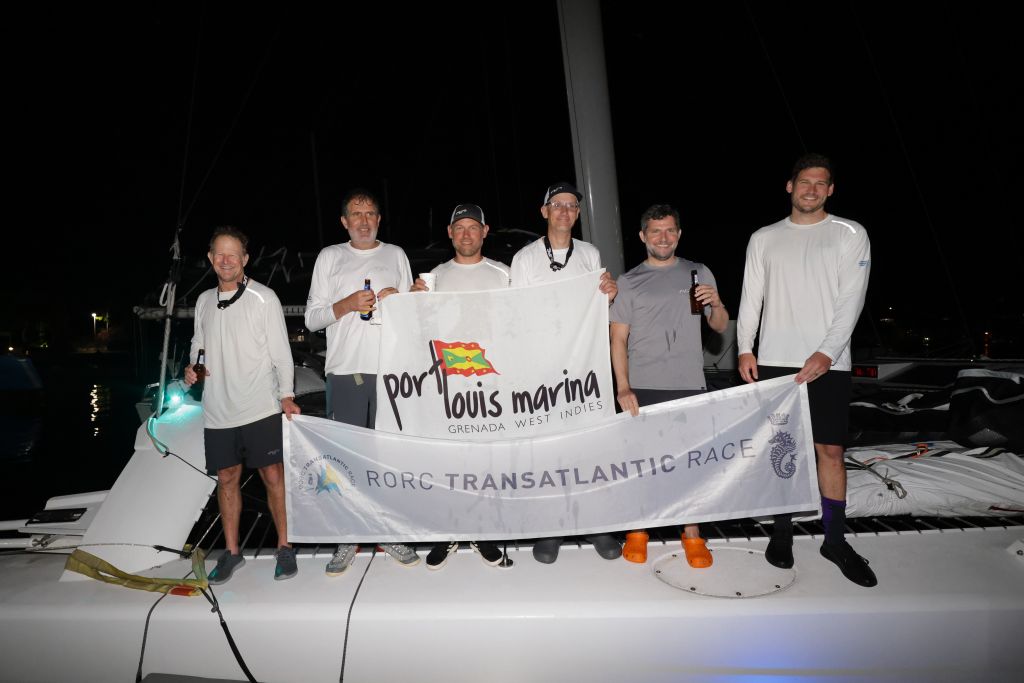 Photos: Top left - Great competition and racing spirit as the owners of the two MOD70s, Jason Carroll (Argo) and Peter Cunningham (PowerPlay) shake hands on the dock after a great race; Above - Jason Carroll's MOD70 Argo (USA) with Brian Thompson, Charlie Ogletree, Charles Coming, Henry Bomby, Alister Richardson; Below - MOD70 Argo (USA) cross the finish line in Grenada - "It was incredible that we were all together for an amazing finish,” commented Jason Carroll. “It was phenomenal." All photos © Arthur Daniel/RORC 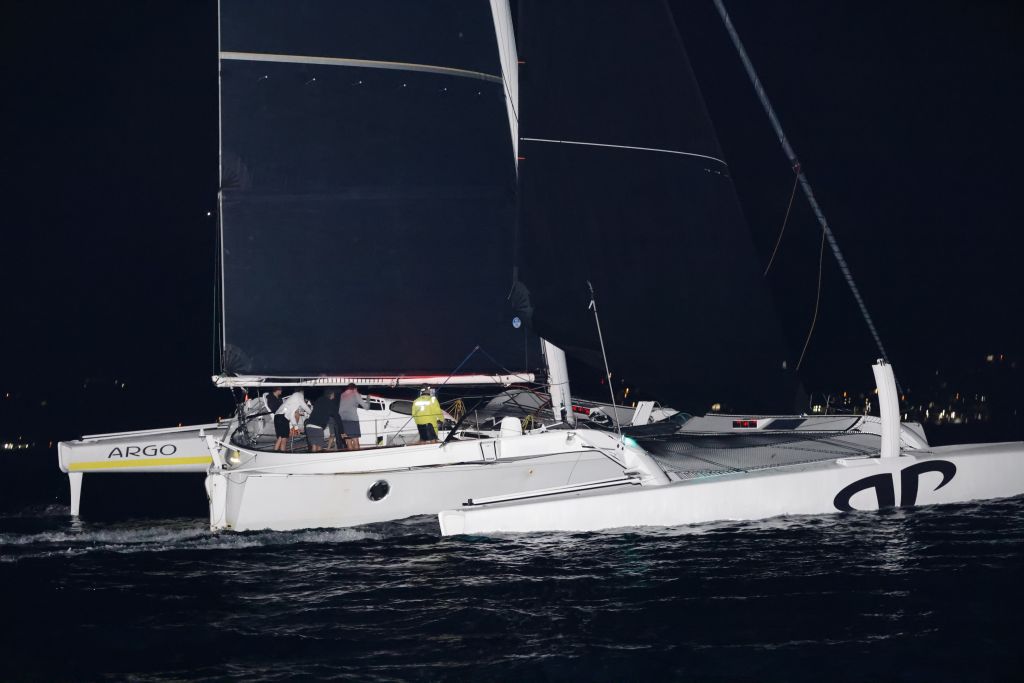