On the morning of the seventh day of the RORC Transatlantic Race news in from PowerPlay and Argo confirms they are in sight of each other, 500 miles from the finish. At dawn in Grenada on Saturday 15 January, a grandstand multihull finish is expected at Camper & Nicholsons Port Louis Marina. The wounded beast Maserati is in third. Comanche is under 900 miles from Grenada and odds on for a new monohull race record. L4 Trifork, Phosphorus II and Jangada are estimated to be leading their IRC classes and news in from the Volvo 60 Challenge Ocean, pushing as hard as anyone. 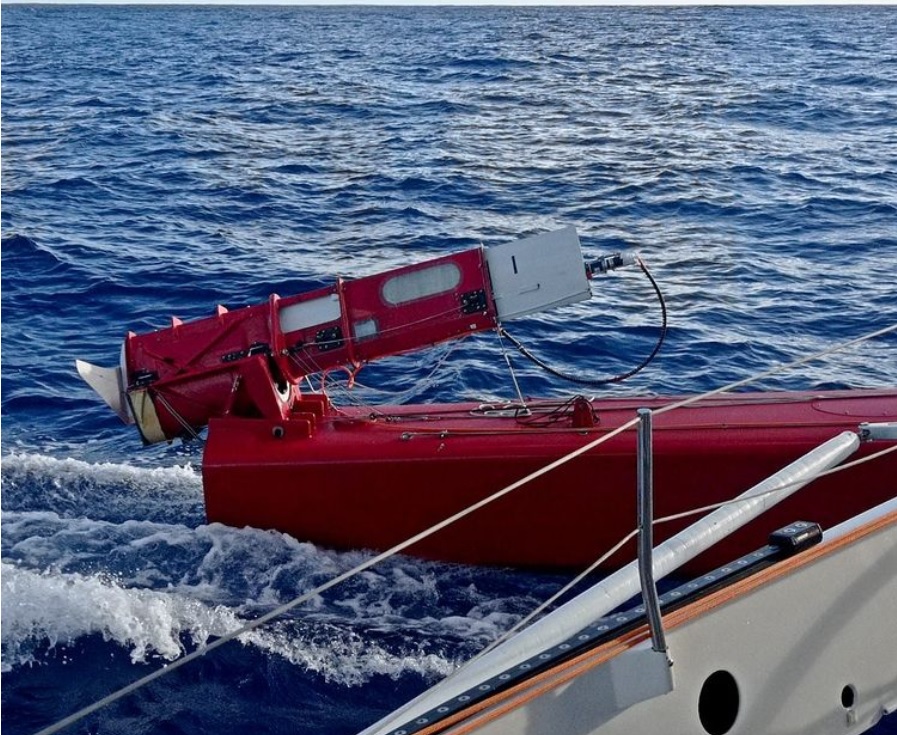 Peter Cunningham’s MOD70 PowerPlay (CAY) still leads by a hair's breadth for Multihull Line Honours. Jason Carroll’s MOD70 Argo (USA) has come within half a mile of crossing PowerPlay. It has been revealed that Giovanni Soldini’s Multi70 Maserati (ITA) has lost the ability to fully foil having damaged, then lost, their port rudder. Argo also has port rudder damage. All three trimarans are in a high-speed pursuit of the finish, coming in hot at over 30 knots of boat speed.

PowerPlay’s Paul Larsen contacted the RORC Media team at 0900 UTC on Day 7. (Note: Due to the carbon-fibre sails on PowerPlay they have no tracker data on port gybe and didn’t see Argo or Maserati coming until they were visual from deck) 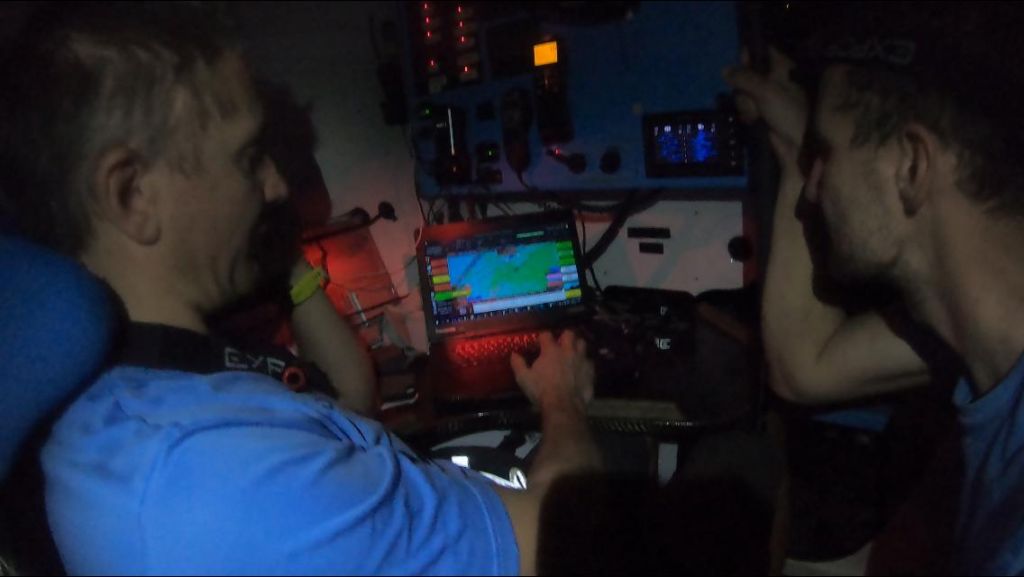 “Argo came in hot from the east; we managed to cross them by about half a mile. Tom (Dawson) and Giles (Scott) went to work with Miles (Seddon) and the decision was made to gybe with them. We’re one reef in and constantly in the 30’s (boat speed). On starboard gybe we got comms and quickly checked our position. As it stands it looks like we’ll cross Maserati as well.  We’ve effectively got a new race start now with around 500 miles to go. Everyone’s pumped and PowerPlay is at 100 percent. This has already been a belter of a race. Looking like it’s going to be like that all the way to the end:) The blue bus is still the hunted, but the hounds are all around.”

The 100ft Comanche (CAY), skippered by Mitch Booth is 868 miles from the finish (0900 UTC 14 JAN). Comanche are expected to finish the race around dawn on Monday 17 January. Comanche is odds on for the double of Monohull Race Record and the IMA Trophy for Monohull Line Honours. Will Oxley reported from Comanche at 1200 UTC on 14 January:

"All well on board the mighty Comanche. We managed to negotiate the light air ridge on the 13th and are now steaming towards Grenada in great trade wind sailing conditions. The sweepstake for finish times is underway with the biggest losers having a rather large bar bill. Talk on board has turned to post race activities with plans emerging for an "intergalactic off the beach cat challenge" between all the Comanche crew. Chief organiser Mitch seems to be making up ever more complicated rules to ensure it will be an event not to be missed."

After IRC time correction, Volvo 70 LF Trifork (DEN) with Joern Larsen at the helm is estimated to be leading IRC Super Zero. Comanche is ranked second with Volvo 70 I Love Poland (POL) third. 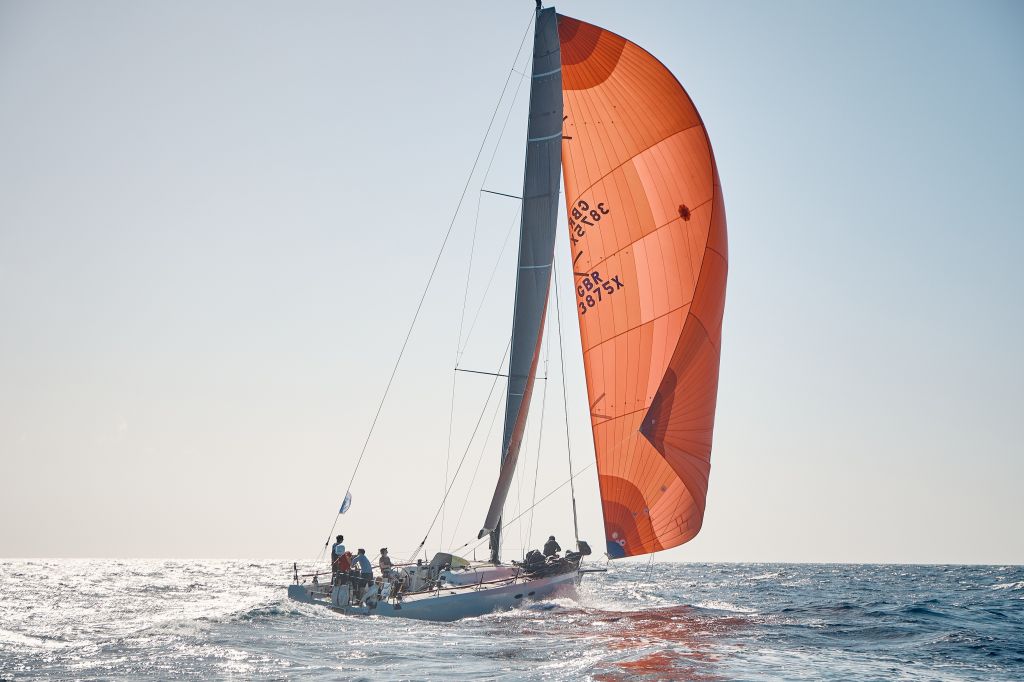 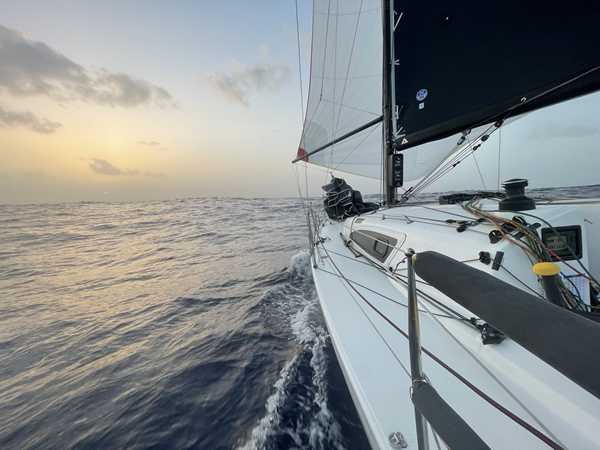 Richard Palmer’s JPK 1010 Jangada (GBR), racing two-handed with Jeremy Waitt, is still estimated to be leading the class after IRC time correction. However, Ross Applebey’s Oyster 48 Scarlet Oyster (GBR) has narrowed the margin to just over four hours after IRC time correction. The biggest climber in the class is Jacques Pelletier’s Milon 41 L’Ange de Milon (FRA). Taking the northerly route around a low-pressure system has paid off. L’Ange de Milon is now leading the class on the water, 1,788 miles from Grenada and challenging for the class podium.

Jangada contacted the RORC Media Team at 1600 UTC on 13 January having spent days on port tack at 20 degrees of heel angle.

“Lee-Ho! - Life on Starboard! Life in the galley is much easier now on the downhill side. We don't have to strap ourselves in. Coffee jars stay in the cupboard and wraps don't slide off onto the floor. The sink drain has stopped gurgling now that side of the hull is in the water. On the other side of the boat, life in the navigator’s seat is somewhat better, we no longer need to sit here in our wet weather gear when water cascades over the deck. The sun is shining, we are sailing directly towards Grenada at 8kts.” 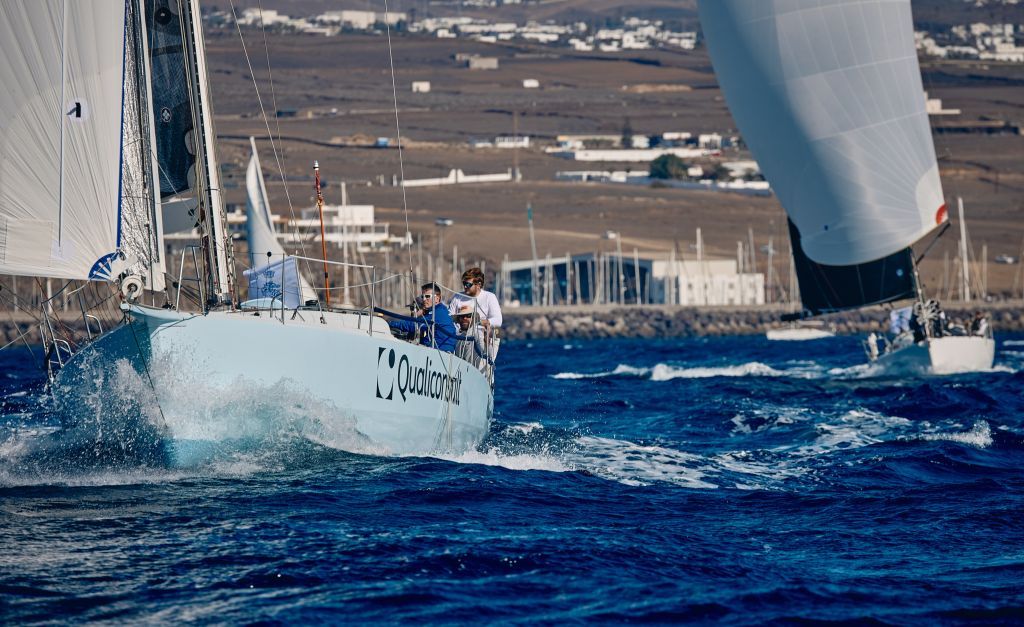 The 2022 RORC Transatlantic Race attracts a huge variety of teams from the world’s best professional sailors racing hi-tech boats, to classic designs crewed by passionate Corinthians, and everything in between. Volvo 60 Challenge Ocean (FRA) is skippered by Valdo Dhoyer. The crew is a blend of professional sailors with guests. The amateur sailors are taking part in their ‘bucket-list’ race, pushing themselves as hard as they can. Challenge Ocean contacted the RORC from the middle of the Atlantic Ocean: 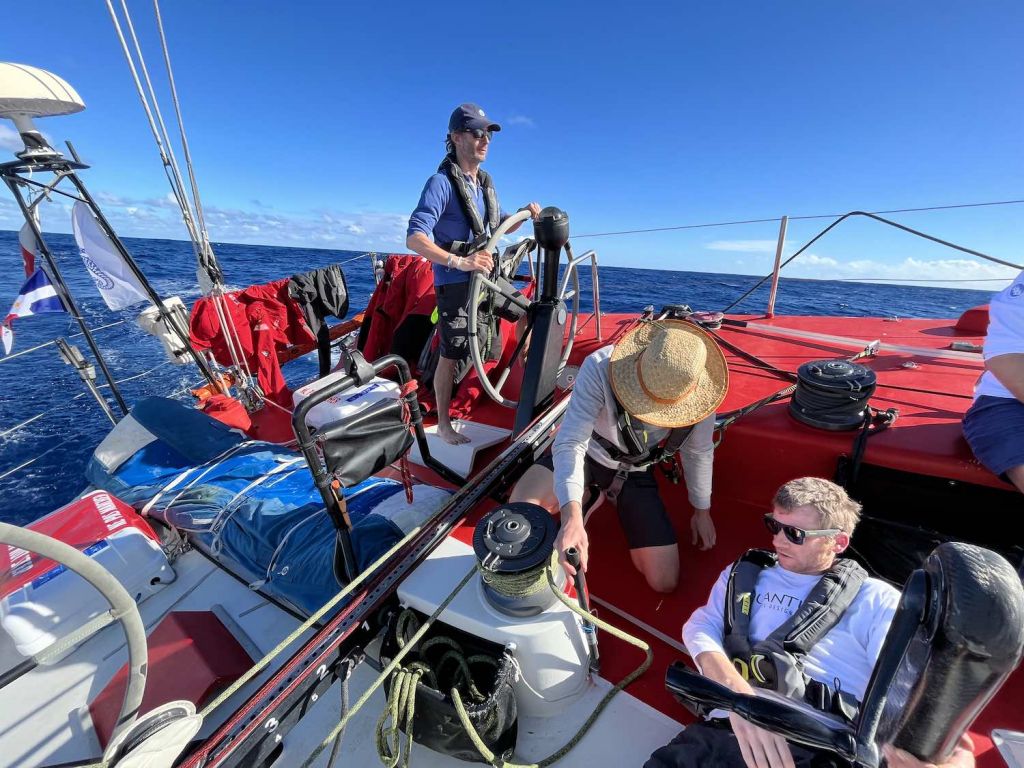 “This is our cry of the sixth day of the RORC Transatlantic Race. The front is behind us, it plunges with a northerly flow in almost a direct course towards Grenada, 1,900 miles away. The sun is back, it's time for drying. The next few days will be, above all, a speed race. Under spinnaker concentration will be required for the helmsmen. It's still on for places to be won or lost, it's up to us... Fair winds!” 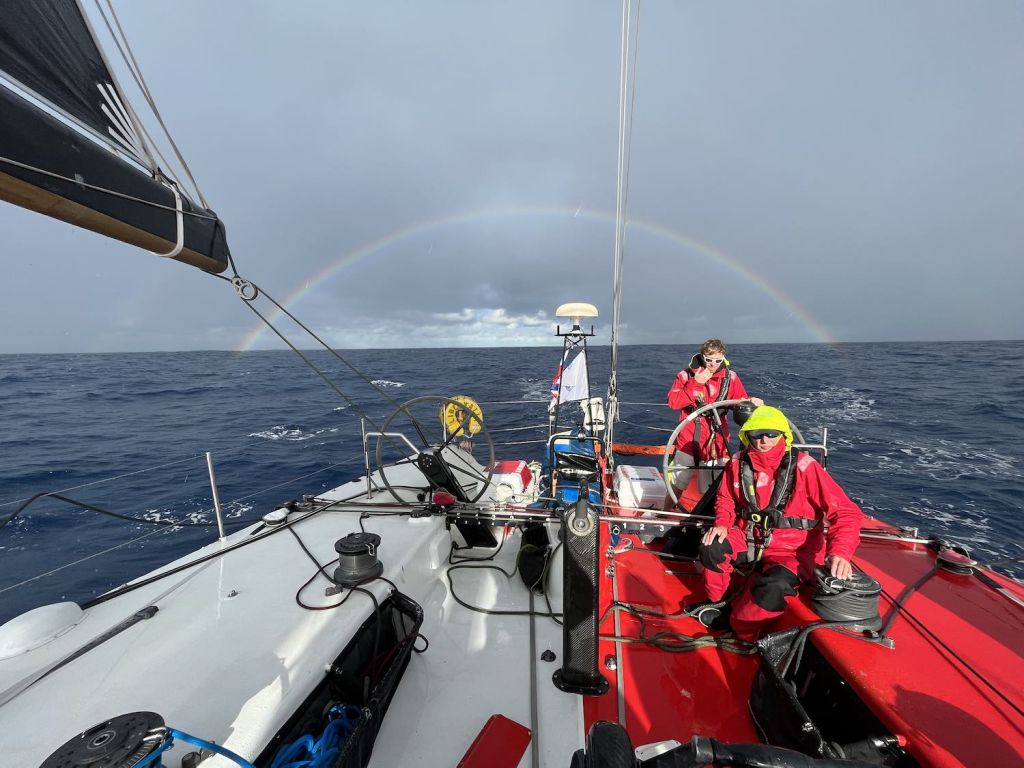 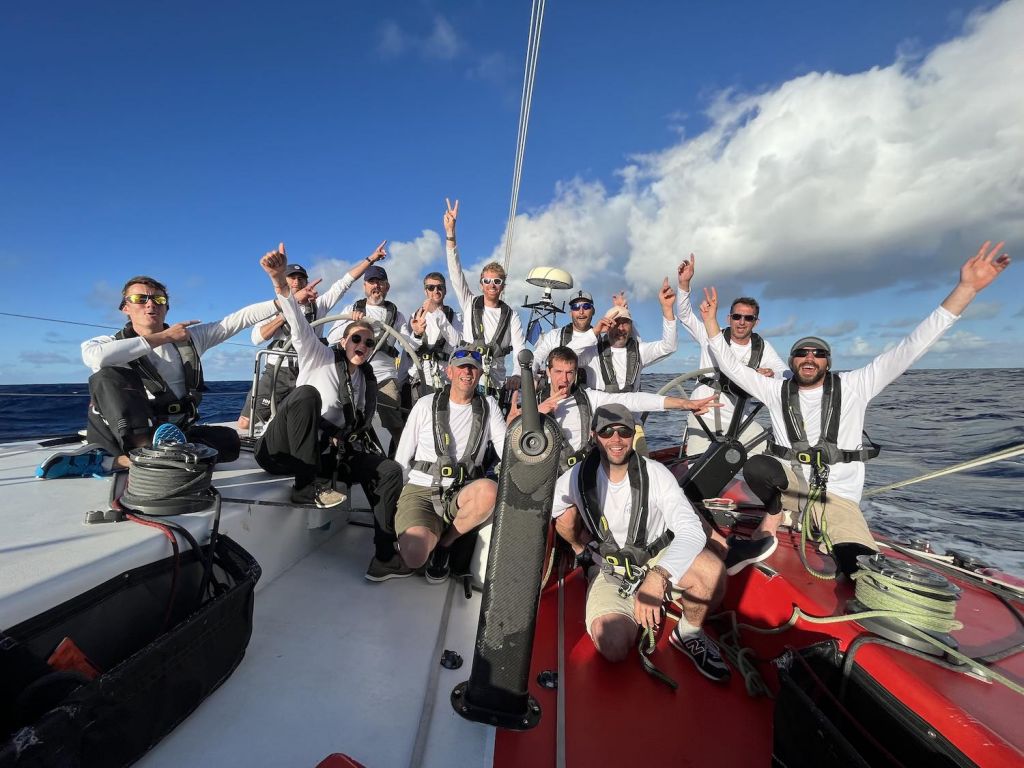 Photos: Top, left - Rainbow over the horizon; Above, right - life in the cockpit; Above - The team on the Volvo 60 Challenge Ocean (FRA), skippered by Valdo Dhoyer All photos © @UNCL #challengeocean