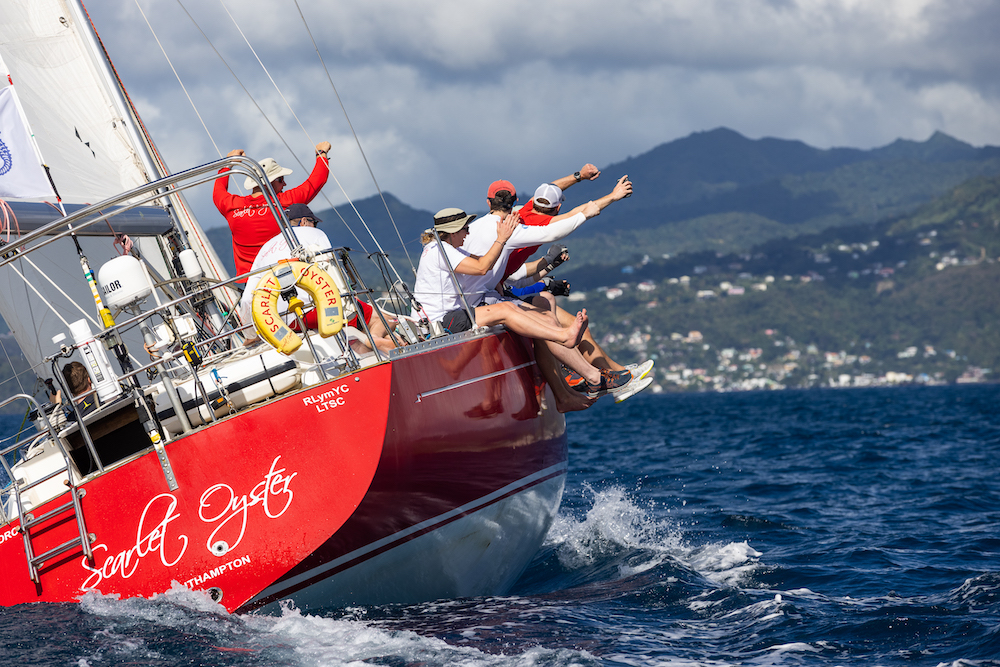 The RORC Transatlantic Race has featured close racing right through the record fleet. On the 16th day of the 3,000-mile race, Ross Applebey’s Oyster 48 Scarlet Oyster (GBR) came in sight of Grenada - peeling to a reaching kite in a dash for the line and in with a chance of snatching overall victory from the 100ft Maxi Comanche. Scarlet Oyster was just short of winning the RORC Transatlantic Race Trophy but virtually assured of winning IRC One.

Scarlet Oyster finished the RORC Transatlantic Race in an elapsed time of 15 days 7 hrs 30 mins 44 secs and after IRC time correction is second to Comanche by just over an hour. Scarlet Oyster is a minuscule 115 seconds ahead of David Collins’ Botin 52 Tala. “It is quite incredible that after over 3,000 miles of racing, three totally different boats from three different classes have an IRC time correction within one hour of each other!” exclaimed Scarlet Oyster’s Ross Applebey.

“Well done on a great race!” commented Mitch Booth. “I hope we had you a bit worried!” retorted Ross Applebey. Mitch Booth replied: “There has been a lot of nail-biting, we have been glued to the tracker watching it. Hats off to you guys, a great effort and congratulations on your class win. You drove the boat like it was a short course. On Comanche we drove at that intensity for eight days and you did that for even longer, so Comanche gives you great credit. We look forward to lining up soon at the RORC Caribbean 600.”

“We are pretty happy,” commented Ross Applebey. “It was obviously close with Comanche and that had been playing on our minds for the second half of the race. We did all we could, so no regrets. The RORC have managed to put their own spin on a transat, with all sorts of weather and angles; it was a bit like a Fastnet! This race was more interesting because of that and we were constantly watching the clock, obsessively looking for speed. This was my 20th crossing but the first time I have done this event. One thing is for sure, it was a very competitive race, which was quite a challenge – that is what the Scarlet Oyster team want for yacht racing.” 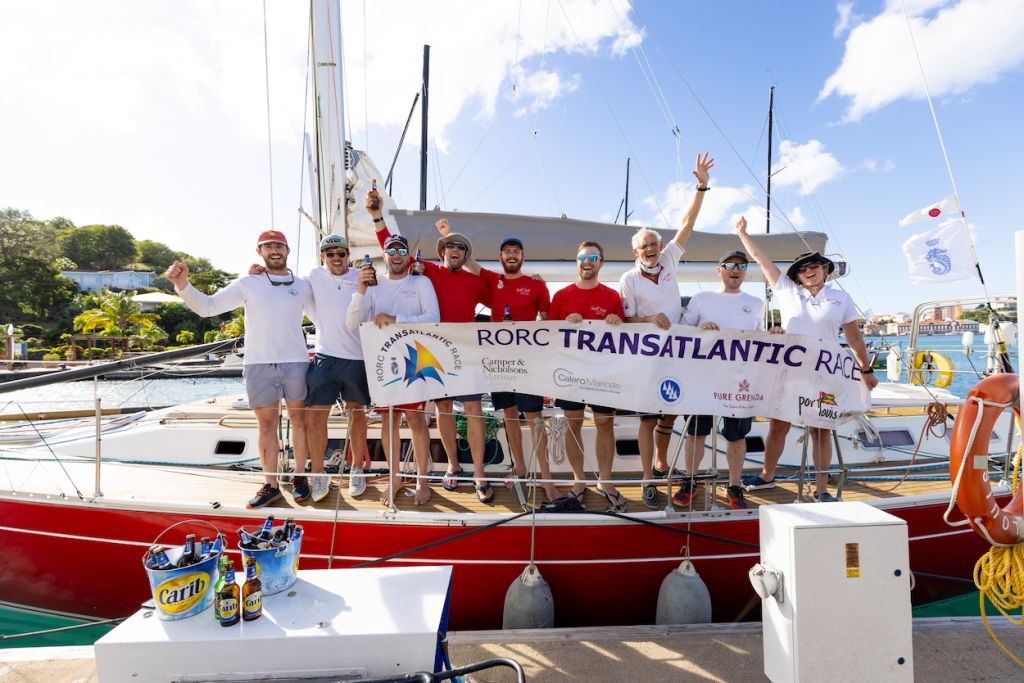 Below - Fellow competitors and the RORC Race and Media Team gather to congratulate Scarlet Oyster. All yachts in the RORC Transatlantic Race receive a great welcome on the dock in Camper & Nicholsons Port Louis Marina, Grenada © Andrew Richards/Pictures of Grenada 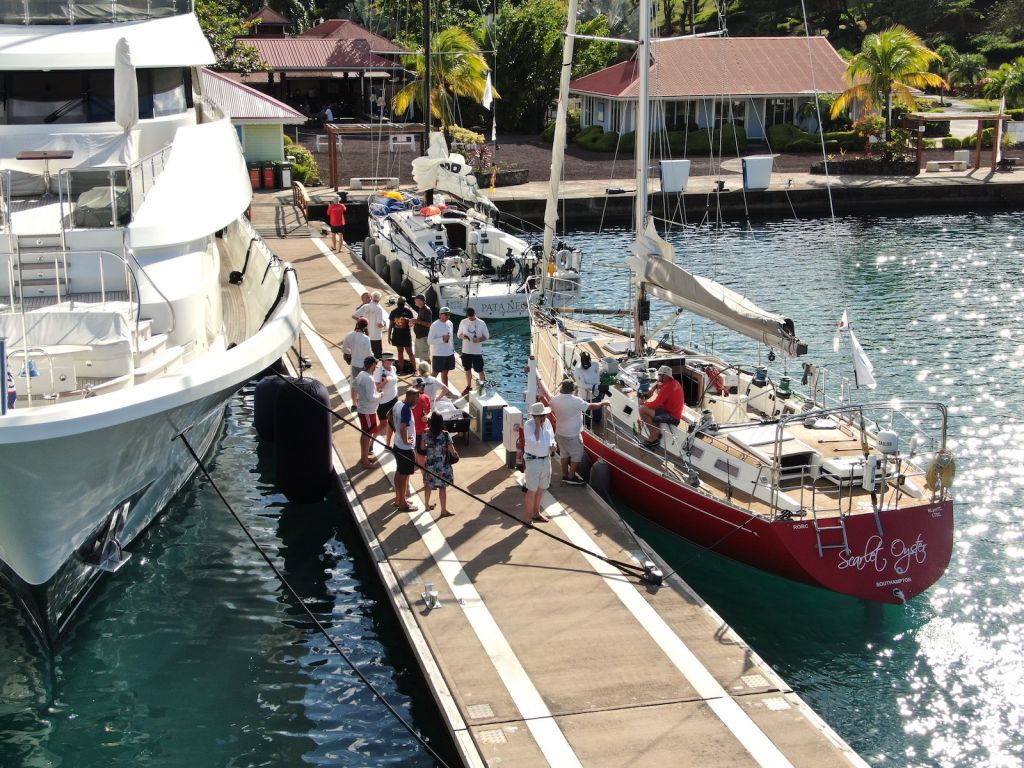 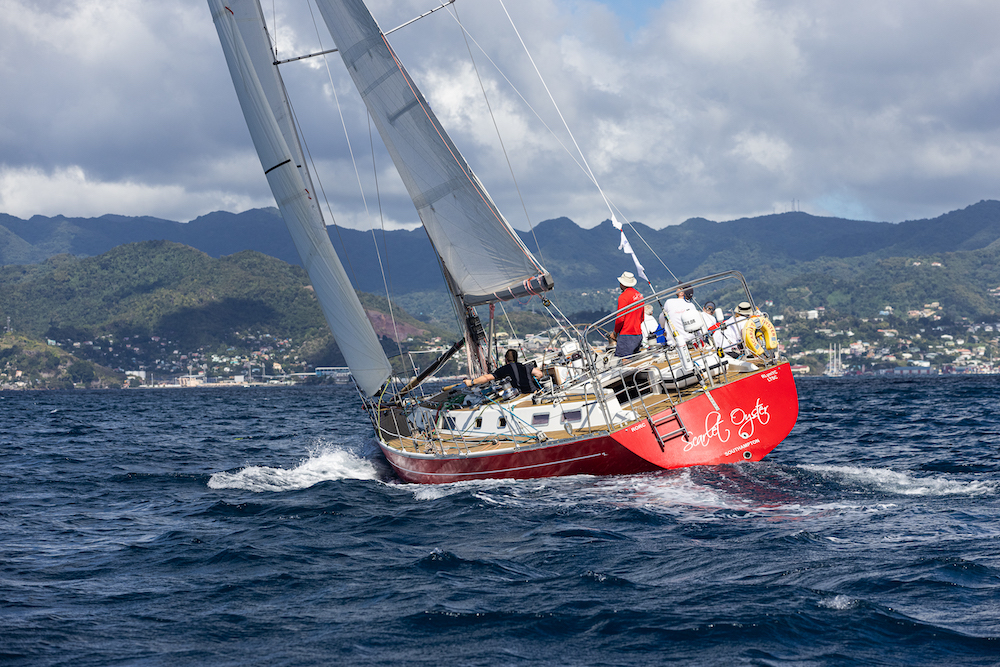 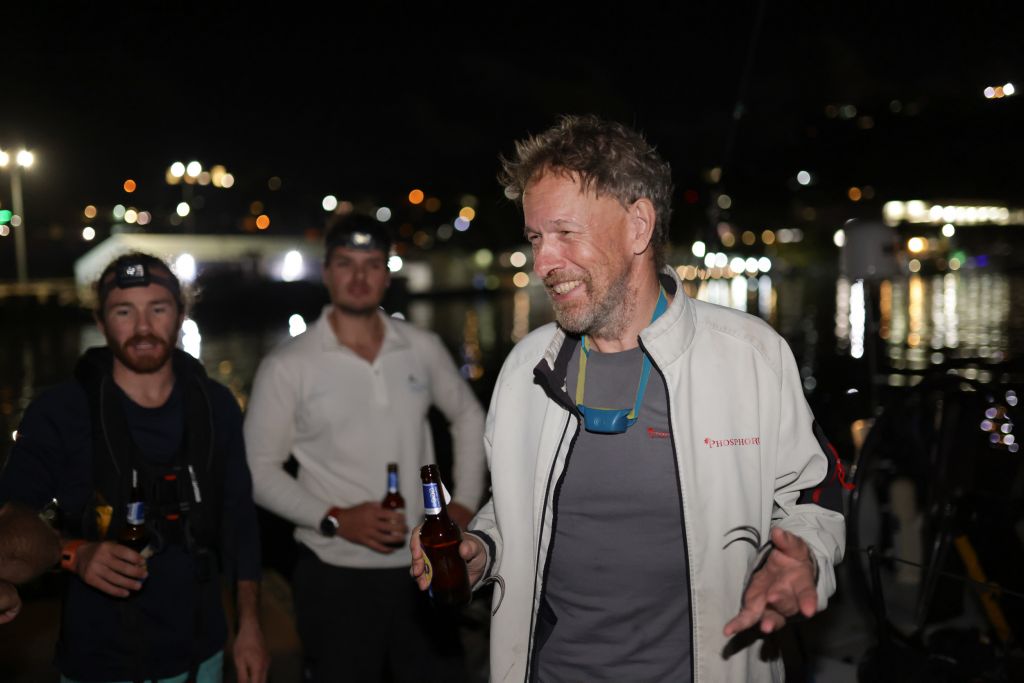 Mark Emerson’s A13 Phosphorus II (GBR) finished the race in an elapsed time of 14 days 15 hrs 18 mins 47 secs, with a new boat speed record of 26 knots, but it was a complex race as Mark Emerson explains:

“Phosphorus is going well, I can’t say we are doing anything different, sometimes you just get the breaks. The crew sailed very well together and as the skipper and owner, with every passing race I have learnt a lot. Racing this boat across the Atlantic is a physical challenge as well as a mental one, we had 400,000 calories on board! There is always someone 24/7 grinding at the back of the boat; I even did my share! From a mental aspect, it was a complicated race and after day 3 we didn’t receive any weather forecast. I think we did pretty well with the first low-pressure system, but it didn’t go as well in the final days as we got into light winds. This has been a weird race, although you can’t see any of the competition you know that everyone was experiencing different conditions that were changing all the time.” 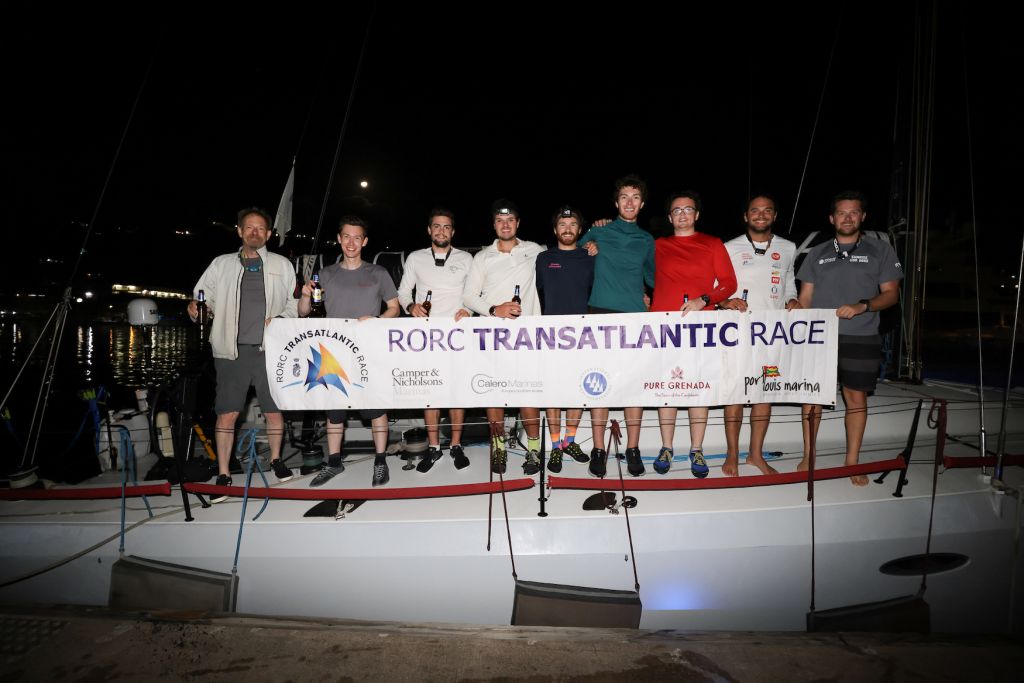 Andrew Hall’s Lombard 46 Pata Negra (GBR) finished the race in an elapsed time of 15 days 2 hrs 2 mins 8 secs. Pata Negra is ranked third in IRC One but likely to be displaced by Jangada later today.

“We had a good ding-dong battle with L’Ange de Milon for quite a long time. It is incredible how many times we crossed paths during the race. However, we started to run out of sails (damage) and to finish things off our bowsprit snapped. The race was good fun and very competitive, but after the bowsprit went, it was just a white sail dead downwind for a long way, but we are here and we are still smiling.” Pata Negra’s Boat Captain, Chris Jackson added. “Pata Negra has a spare bowsprit which will arrive in Antigua before the RORC Caribbean 600, so we are 100% on for the next race.” 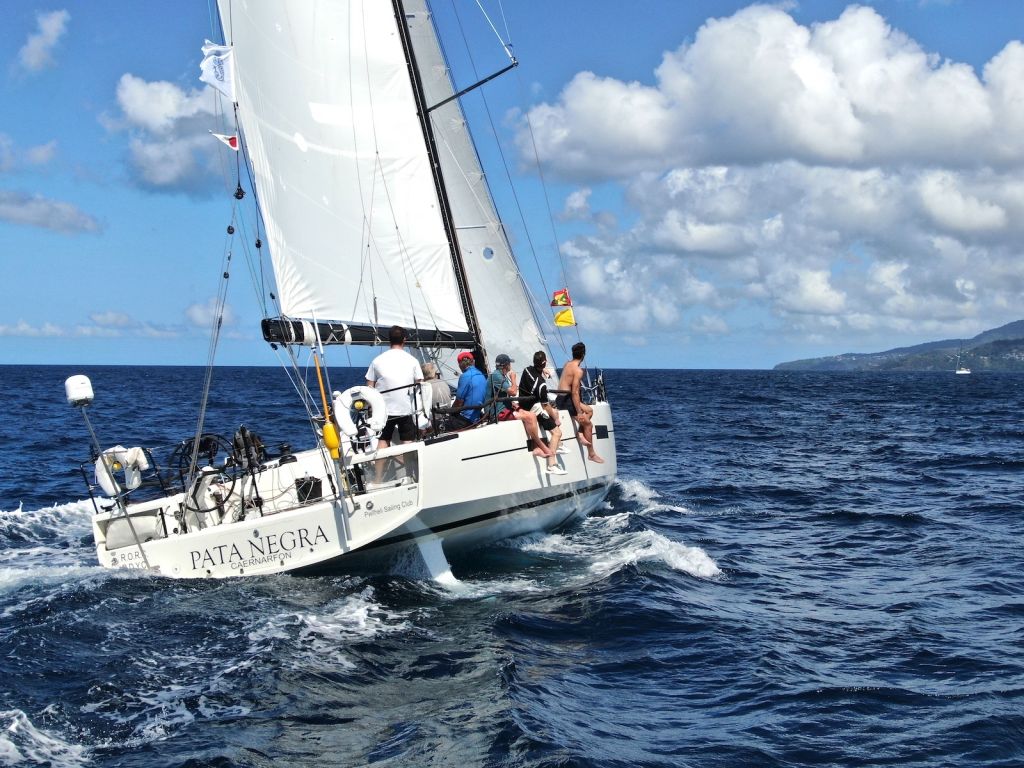 Above - Andrew Hall’s Lombard 46 Pata Negra (GBR): “We had a good ding-dong battle with L’Ange de Milon for quite a long time. It is incredible how many times we crossed paths during the race © Arthur Daniel/RORC 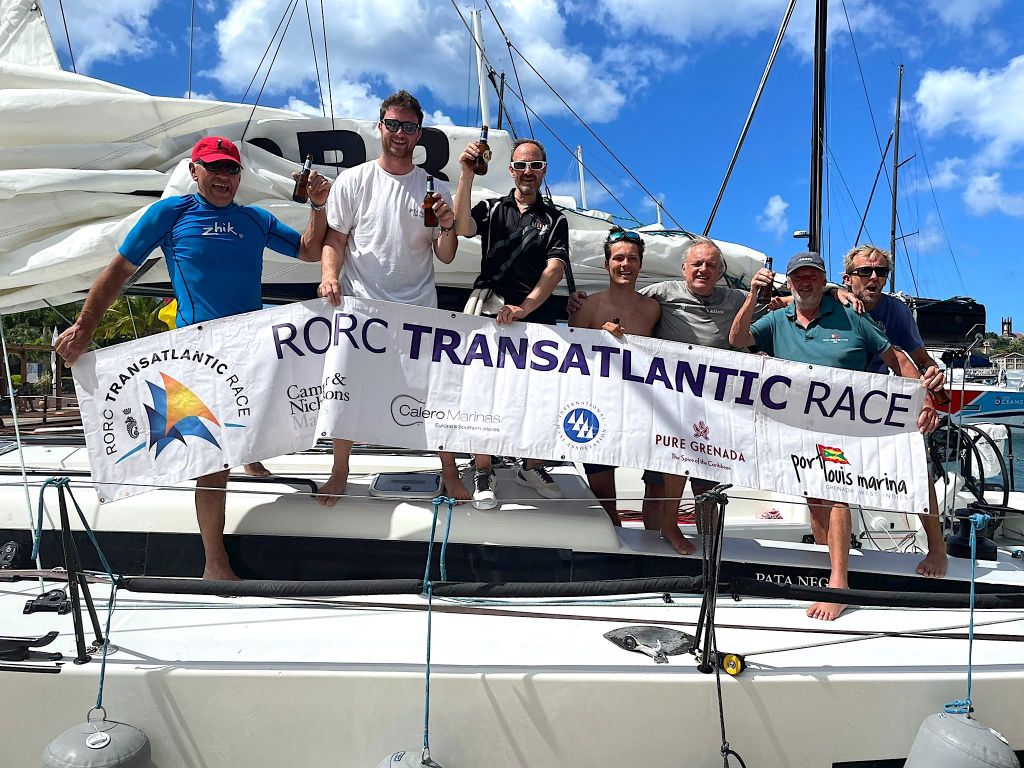 Due to Covid restrictions in France, L’Ange de Milon proceeded on to Martinique after finishing the race. Jacques Pelletier thanked RORC Race Officer Steve Cole for a great race as the team crossed the finish line. Eight teams are still racing in the Atlantic Ocean. 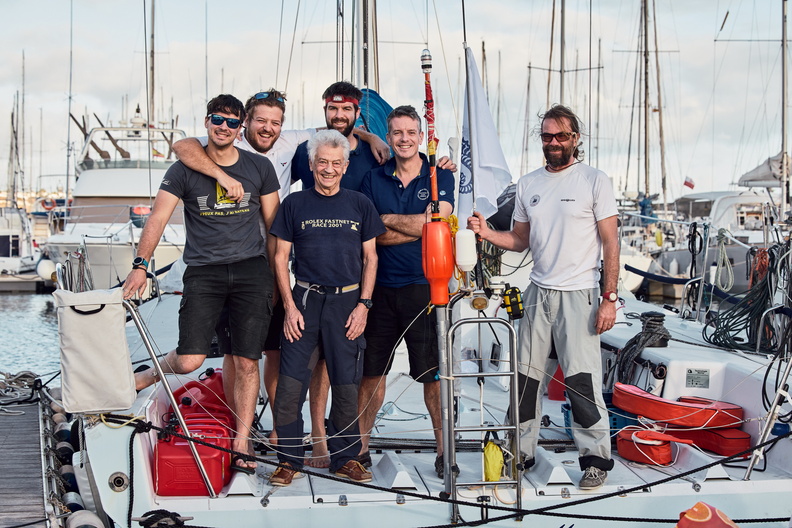