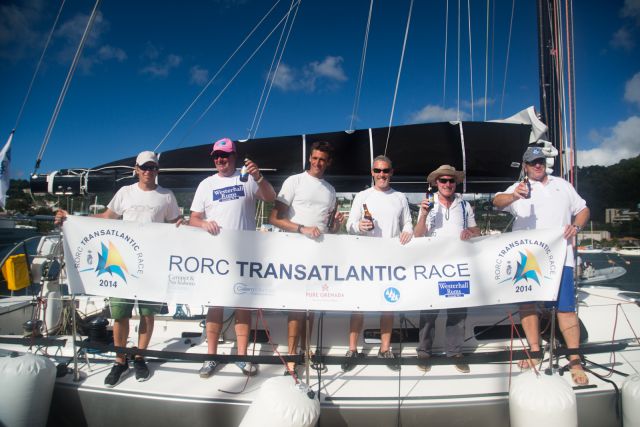 After time correction, Apollo 7 is leading IRC Two. Nigel's team included three close friends from his home town of Plymouth, Devon: Steve Wassel, James Slater and Mark Davies. Also on board were two offshore specialists: Dan Gohl, a past Class40 world champion, and Sevenstar Round Britain and Ireland Record holder, Brett Aarons, who won class in the Rolex Fastnet Race with Nigel Passmore on another yacht.

Nigel Passmore spoke dockside in Camper & Nicholsons Port Louis Marina about the race and why he decided to take part:

“This morning the sun came up and I thought about home, where it would be cold and miserable, and there I was at the wheel, flying along under spinnaker, in just a pair of shorts, thinking this is just heaven and 10 of the 15 days have been just like that.

“At the beginning of this race, we went through the hard bit; getting out of the Canaries was tough work, fully oil-skinned up and I was thinking, what is this all about? We had a blustery period mid-Atlantic and I remember one night at the wheel in well over 30 knots of wind. It was pitch black with torrential train and difficult to read the waves, but we were racing and doing 16 knots into the abyss. We didn't take the kite down or put another reef in, we kept pushing hard and the challenge of a race is that on top of seamanship, you have the tactical consideration of beating other boats. You know you have to keep driving on if you are going to succeed.

“This is something I have wanted to do for 20 years or more and to do it, you have got to get yourself in the right frame of mind and two years ago, something happened to an old friend of mine and I thought I had to do it now. I had my 50th birthday recently and I thought, come on, you have to start doing a few of these things.

“I have always liked to sail with good friends and I don't like to single anyone out, but I have to give a big hand to Brett (Aarons). He has been fabulous. He has looked after us totally and been an absolute rock for the whole campaign.”

Three yachts are still racing in the RORC Transatlantic Race. On 16th December at 1000 UTC, Frank Lang's French X 40, Optim'X, was 118 miles from the finish and, like three other yachts before it, Optim'X had chosen a route north of Barbados. At their current speed Optim'X are likely to finish the race at around 0500 UTC 17th December. Yves and Isabelle Haudiquet's French Pogo 40, Bingo, is 211 miles from the finish and the crew of four is estimated to finish the race at 1700 UTC 17th December. Like several other competitors, Bingo has been affected by seaweed catching on their rudder, as reported in their blog: “We are slowed down by tremendous area of weeds and have to dive several times a day. We have very poor day's run but we keep our good mood.”

Denis Villotte's French JNP 12, Sérénade, has increased her speed to the finish having covered 147 miles in the last 24 hours. Sérénade, with a crew of just three, has 396 miles to go and is expected to arrive before the RORC Transatlantic Race Prizegiving on Saturday 20th December.

Race fans may have noticed that Jean-Paul Riviere's French Finot 100, Nomad IV, has now left the Canary Islands. It is understood that they will be heading straight to Antigua to take part in the seventh edition of the RORC Caribbean 600. Meanwhile in Grenada, crews are enjoying the delights of the island, including scuba diving the beautiful reefs and taking island tours of the stunning interior, famous for its rainforest with secluded waterfall locations.