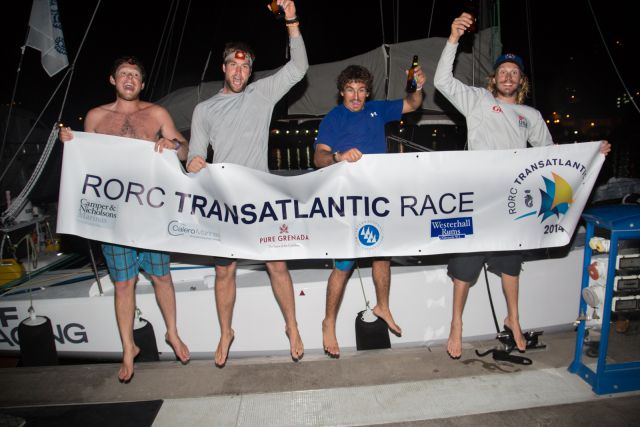 Class40, Oakcliff Racing ghosted into Camper & Nicholsons Port Louis Marina to a warm welcome and a case of cold beer, as a huge welcoming party cheered the team onto the dock. The four sailors, from Rhode Island, New York and Connecticut USA, are more used to match racing and Melges24 regattas than ocean racing, and this adventure started with crossing the Bay of Biscay in November in foul weather for the delivery to Puerto Calero, Lanzarote. The four crew, all in their 20s and crossing the Atlantic Ocean for the first time, leapt for joy in Grenada, rightly proud of their achievements.

Oakcliff Racing skippered by Hobie Ponting and sailed by an all-American crew, crossed the finish line of the 2014 RORC Transatlantic Race, off Quarantine Point, Grenada at 23:15:41 UTC on Friday 12th December 2014, with an elapsed time of 12 days, 13 hours, 15 minutes and 41 seconds. Oakcliff Racing is the current leader for IRC One and lying second overall in the RORC Transatlantic Race.

As Oakliff Racing crossed the line, there was an emotional scene on board as the team congratulated each other with handshakes and bear-hugs. Arriving on a Friday after 13 days at sea is a superstitious scenario for some, but as luck would have it, Friday night is Texas-style barbecue night at Camper & Nicholsons Port Louis Marina. Skipper, Hobie had three portions of jerk chicken after eating freeze dried food for almost two weeks!

“That was epic. We have crossed an ocean and it’s the first time any of us have done it and it feels fantastic. The last 24 hours was the hardest of all. We had very little wind and it was frustrating having spent days charging along at 20 knots. We have all worked so well together and we have finished this race better friends than we started. We don’t know what day it is right now and a shower, some good food and a bed with sheets is top priority,” Exclaimed Skipper, Hobie.

For the six yachts still racing in the RORC Transatlantic Race, the wind has become lighter, slowing their race to the finish. Aref Lahham's Swan 68, Yacana is likely to be the next yacht to finish at around midnight local time (Saturday 13th December). Derek Hatfield's Volvo 60, Spirit of Adventure has 278 miles to go and expected to finish the race on Sunday night or Monday morning, local time.

Yacana poses a threat to Oakcliff Racing for the lead in IRC One. At 1200 UTC 13 December, Yacana was 138 miles from the finish and estimated to be just 7 hours behind Oakcliff Racing on corrected time. The crew of Yacana are all friends, mainly from Greece. Here is an extract from their blog:

From Last Sunset to Sunrise...
At sunset last night the whole crew was on deck. It was the first clear sunset we had seen. The sky was clear, temperature perfect and there was a sense of excitement in our chatter as we realised we had only three figure nautical miles to go. We could smell and feel the Caribbean and even for Christoforos, one of the clouds on the horizon looked like a palm tree. Then as the rest of the crew went to sleep and our watch took over, the sky offered a magnificent spectacle of stars in a moonless sky. We were cruising between 9 and 10 knots with no sound except for the flapping of our sails, and the surfing noise of Yacana on the small waves interrupted by the occasional "trim Aref trim" of Pericles, followed by the "Lasca Ligo" of Dimitri. Suddenly the moon comes up and everything is bathed in an unreal silvery light ...a humbling privilege.

The watch is over, we go down and grab something to eat before sleeping for 4 hours when we are up again. The other watch was uneventful. Our watch starts again, and after a few hours, Dimitri decides that we are going to bring down our heavy spinnaker and put up the Orion lighter spinnaker that Don and the rest of the crew had repaired. The operation is delicate in the dark, but Dimitri issues very clear orders and procedural steps to all four of us, and we needed only to wake up Lefteri. Huge success. The heavy spinnaker pulled down and packed and the new one was up in no time, as one of the most magnificent sunrises appeared. Also, a flying fish flew into the small bathroom on the port side! No worries, he will join the other flying fish in our frying pan.....”

In IRC Two, Nigel Passmore's British J/133, Apollo 7 leads on the water after time correction and is estimated to be lying third overall. Apollo 7 has been one of the most southerly yachts in the race, but as the wind has now gone to the north east, the team from Plymouth have gybed back towards the rhumb line. Frank Lang's French X-40, Optim'X has consistently been to the north of Apollo 7 and is over 140 miles behind them. The estimated arrival time for Apollo 7 is Monday 15th December, local time.

In IRC Three, Denis Villotte's French JNP 12, Sérénade is caught in a near windless trap over 770 miles from Grenada. The better breeze is tantalisingly close just a few miles in front of the yacht, but for now, Sérénade is only able to manage a very slow speed. Sailors from the yachts that have finished the race have been wishing well to Denis Villotte's team. Irish Olympic sailor, Tim Goodbody is the Boat Captain for Southern Wind 94, Windfall. “On Windfall we have luxury cabins, flat screen TVs and a full gallery with all the modern conveniences. Of course we raced across, but it was in a lot of comfort. I take my hat off to three guys in a stripped out 40-footer. Fair winds to Sérénade .”