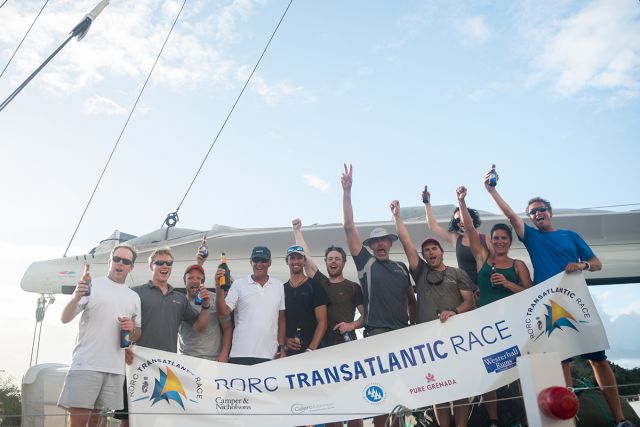 Tales II sets a new Class40 record for the RORC Transatlantic Race and Windfall make it two in a row. Aloha still have a chance of winning overall and there is a UFO sighting on caffeine deprived Nunatak.

Southern Wind 94, Windfall, crossed the finish line of the RORC Transatlantic Race just before 4pm local time on Thursday 10th December, completing the 3,000 mile race in just over 12 days. Windfall is the second Maxi to complete the race and in doing so, is the only yacht to have successfully finished both editions of the Royal Ocean Racing Club's new Transatlantic Race. Irish Olympic sailor and skipper of Windfall, Tim Goodbody, spoke about their race:

“Windfall got away well and it was great to lead the fleet at the start in Lanzarote. We were going well and the crew quickly settled into a good routine. We knew we would never be able to hold on to Nomad IV reaching, but we were also very surprised how fast she was through the light winds that we all experienced after a few days in. Fair play to Nomad, they have really got the boat going well. Since the last race, Windfall has also had some performance improvements and for some time it was a great race on handicap between us. However, we managed to damage our masthead kite and the constant repairs required meant taking it down and re-hoisting, which was always going to slow us down. Obviously we entered the RORC Transatlantic Race to win, it but our guests, who own a smaller yacht, also came to experience their first Atlantic crossing and they have had a fantastic experience, so on that score, it is mission accomplished.” 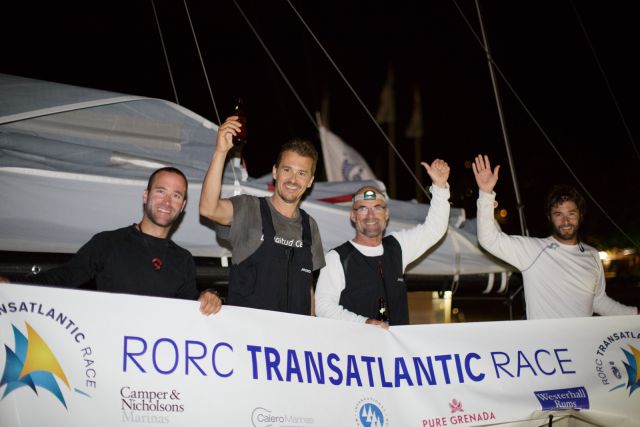 Gonzalo Botin's Spanish Class40, Tales II crossed the finish line of the RORC Transatlantic Race shortly after 9pm local time on Thursday 10th December. Completing the race in just over 12 and a half days, Tales II with a crew of four - all from Santander - was the first Class40 to complete the race and has set a new Class40 record for an elapsed time of 12 days 12 hours 36 mins 32secs. Tales II was welcomed to Grenada by RORC Admiral, Andrew McIrvine.

“We are very happy, we have had a good race,” commented Gonzalo Botin. “We pushed the boat all the time and we have had a great transat and I am very, very happy because everyone worked very well and we are delighted to be in Grenada. We know the boat is very quick, but it is not just about that, in order to have the speed you have to sail very well. Not just anyone can jump on board and make it go fast. Apart from our stop in Tenerife to repair the rudder, I don't think we could have been much faster in the conditions we have had. The navigation of the boat and the performance of the crew have been very good. All of the crew take turns driving and we have stuck to a watch system of two on deck, one on standby and one off watch. All of the crew are excellent sailors so we have kept up the performance all the time. The last 48 hours were hard because we had a lot of squalls. We didn't have any really big increase in wind, but the direction was unstable and that takes a lot of concentration. This is my eighth transatlantic and at 3,000 miles, it has been the longest, but very satisfying. Our next race will be the RORC Caribbean 600, which we have won our class in for the past two years.”

“Well it’s been a funny old time here. Wind is just ever so slightly too high for us to be able to fly our kites safely (especially in the pitch black nights). We’re therefore going dead downwind just on black sails, and seem to be ticking off the miles okay. Less than a 1,000 miles to go... We’re down to sharing one cup of coffee between us at morning and night.

“In other random news, last night while on watch, I was admiring the stars when an UFO certainly appeared and started circling around us! It stayed with us for ages, with bright colours of red, green and white. Petrified, I was about to call on Chris (thinking he might have to rescue me from being abducted by aliens), when the UFO promptly disappeared again and the only thing left in the night’s sky was the boat’s windex and tricolour ... Yes. I think that cabin fever might be setting in!” - Elin (& a very worried Chris!)