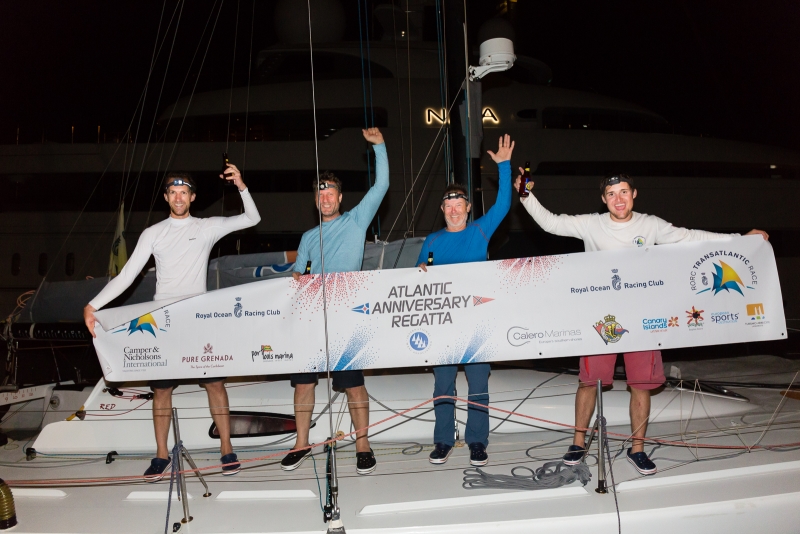 Red completed the race in an elapsed time of 15 days 17 hours 25 mins 25 secs to take a hard-earned victory from Berthold and Tobias Brinkmann's MarieJo, which was just under nine hours behind. The Class40 lead had changed hands at least three times during the race, but it was Red with a young but very experienced crew that has been together for many years and raced thousands of miles, that took the Class win.

"For three of us this is our second transatlantic race in this boat. It is a great team and we have fun together," commented von Blumencron. "This was a very tactical race. Right from the start we were upwind for almost 500 miles. We did make a big tactical mistake mid-Atlantic when we went south too early to try to cross 'Death Valley' as we called it. MarieJo got 70 miles ahead of us so we had to catch them. Eventually the easterly breeze arrived and the downwind slide began. 48 hours from the finish we had a really squally night with tough racing in 35 knots of wind. In contrast, the last night was so peaceful - a wonderful way to end a great race."

German J/V53 Bank von Bremen finished the race in an elapsed time of 15 days 21 hours 29 mins 57 secs. The offshore training boat is owned by Segelkameradschaft Das Wappen von Bremen and skippered by 29-year old Alexander Beilken with a crew with an average age of 31. The Bremen-based yacht will be taking part in the whole of the Atlantic Anniversary Regatta as friends of the Hamburg-based NRV, celebrating their 150th anniversary, but there is fierce but friendly competition between Bremen-based yachts and those from Hamburg.

"We are delighted to have beaten the Hamburg boats to Grenada," smiled Alexander Beilken, tasting a cold beer. "This boat has sailed over 160,000 miles and we feel very privileged to write another chapter in her history. Unfortunately for us we have to go straight to Antigua as we have a new crew member from our club coming out to sail on the boat, so after breakfast, we will sail north to Antigua. We will be back racing in the RORC Caribbean 600 in February."

German JV52 Haspa Hamburg, owned by another youth sailing initiative, Hamburgischer Verein Seefahrt, finished the race in an elapsed time of 16 days 03 hours 20 mins 50 secs. The crew are nearly all in their 20s and skipper Max Gaertner and nearly the entire crew went for a swim in the marina on arrival. For the last part of the race Haspa Hamburg was locked into a personal duel with Gerald Bibot's Belgian catamaran Zed 6.

"We destroyed both of our spinnakers which really reduced our speed and Haspa Hamburg came from 100 miles behind to beat us to the line by just over 10 minutes," explained Zed 6 skipper Gerald Bibot, "But, we were happy for them, not sad for us. It is fantastic to see young talented sailors making their way in our sport and I am sure many of them will go on to do great things in the future."