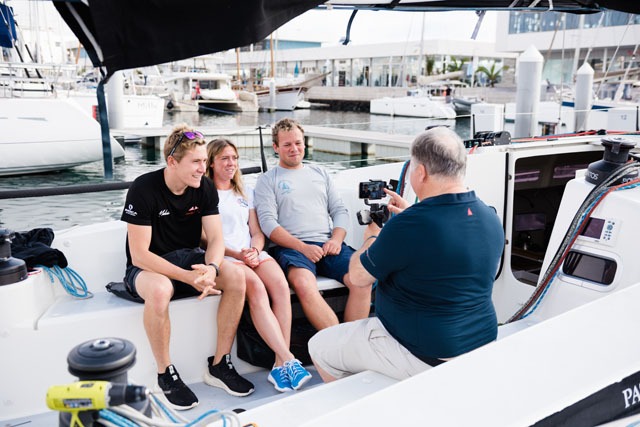 “We have an entire RORC season planned for 2020 and it starts here, so let's go racing,” confirmed Andy Lis. “Months in advance we have been preparing the boat for this race; there are strict regulations to adhere to which is phenomenally important. It is great that the RORC come down and go through everything to make sure we are up to date and have everything we require. With a few days to the start, we are making sure we have all our food packed. We are really looking forward to racing across the Atlantic to Grenada.”

Amy Seabright sailed with Andy Lis as a child, racing Optimists at the Royal Corinthian YC, Burnham on Crouch. In 2013 Amy teamed up with Anna Carpenter for a tilt at selection for the 2020 Olympic Games in the 470 Class. The pair consistently placed within the top ten at international regattas, but this summer lost out on selection to Eilidh McIntyre and Hannah Mills.

“This is a bit different to 470 sailing and this is my first offshore race,” commented Amy Seabright. “Having lost the Olympic trials to Hannah and Eilidh, I just wanted something that really put the pressure on and completely different to what I do; a challenge to put a bit of drive on. I am glad it's a downwind race, it is quite a different concept when you are heeled over on Pata Negra compared to a 470,” laughed Amy. “Racing a 470 is normally two 50-minute races and then it's home and dry. So this is a massively different dynamic, just even packing for this was quite hard. I normally take items with me so that I can feel at home as I can, but I have had to pack the least I can manage for the RORC Transatlantic Race.”

Will Harris has just finished the Transat Jacques Vabre, completing the 4350nm race in just under 15 days, racing two-handed with Boris Herrmann on IMOCA 60 Malizia. Will has also excelled in the Figaro Class, claiming rookie of the year in 2016.

“I have sailed with Pata Negra a few times, including winning the Sevenstar Round Britain and Ireland Race,” commented Will. “It was a great experience to race with Giles (Redpath) on that race, but it is also exciting to race with this young crew. This is a big change from the IMOCA as we have six crew on Pata Negra which is a great fun boat to sail. We have just done our first training session together as a crew and we are working out our watch system and how we will perform as a team. We are really looking forward to the race.”

Whilst the teams in the RORC Transatlantic Race are busy preparing for the start, the sailors took time out today, Wednesday 20 November to welcome young members from the Real Club Nautico de Arrecife (RCNA). The junior sailors were treated to a guided tour of the competing boats including Volvo Ocean 65 Childhood I, which is supporting the World Childhood Foundation, founded by H.M. Queen Silvia of Sweden. The RORC Transatlantic Race Welcome Party will take place tonight, with crews and invited guests enjoying complimentary drinks and Spanish tapas at the RCNA.